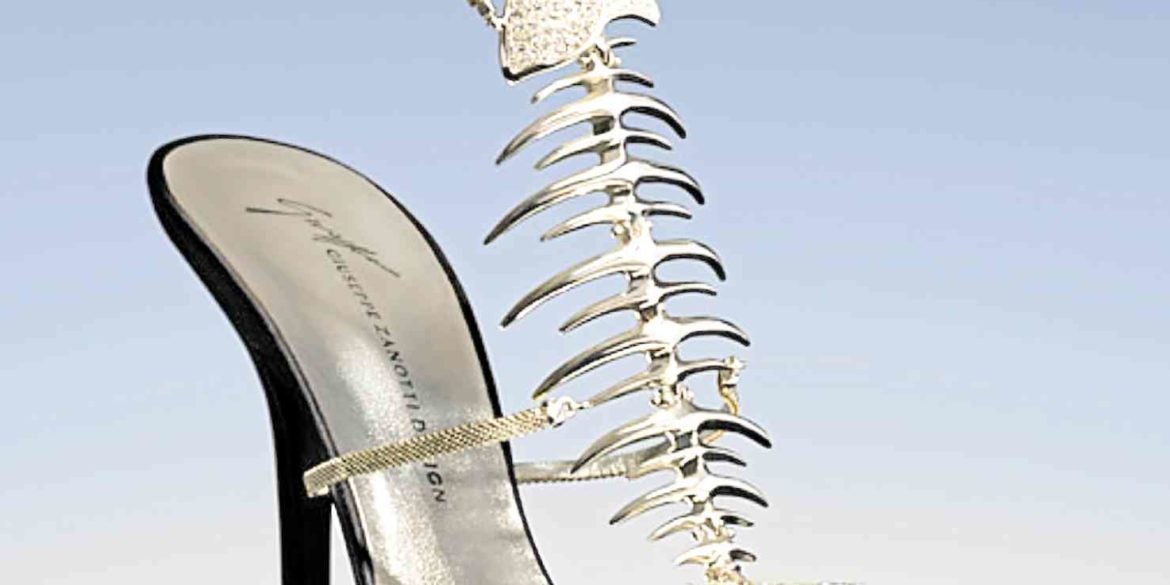 The Slim Sandal seen on “Sex & the City” movie

On a recent trip to New York, I was lucky to get a little preview at the Giuseppe Zanotti showroom. I saw a bit of their new collection and got to know a little bit more about the brand.

Giuseppe Zanotti, the man behind the label, has a certain fascination for integrating various influences like art, music, film and architecture in his shoes. Combined always with Italian allure, Zanotti creates shoes which are the choice of celebrities like Beyoncé and Lady Gaga.

It’s also the reason you will spot Zanotti shoes all over pop culture, like in Kylie Minogue’s music videos or worn by actors like Kim Cattrall on “Sex & the City.”

I guess this is also the reason it’s a luxury house that’s big on collaboration. Zanotti allows for other viewpoints. Many celebrities come to the designer for custom pairs that they wear on tours.

In 2016, Rihanna’s “Anti” tour saw the “Love on the Brain” singer in chap boots by Zanotti to match her bodysuits and coats. It took three months to make the boots as the designer wanted to find a balance between comfort and a show-stopping shoe. After all, these boots would be with her when she made her way around the stage and through so many countries.

If PVC shoes are still a hot item on the fast-fashion shelves, you can be sure that Zanotti had a hand in making it the trend that it is. Rihanna was once seen in an almost invisible shoe made of PVC with a gold heel.

Musicians always find their way to Zanotti. The most recent one is Rita Ora. The British singer first had the designer create 28 pairs for her tour. Later, they created a line for both Ora and Zanotti fans alike that consisted of stiletto heels, over-the-knee boots and slides, all with gold Cuban-link accents. It’s tagged as maximalism meets comfort.

If you were to ask me, Zanotti really likes to play with the tastes of his collaborators. For a project with Jennifer Lopez, the shoes and handbags featured details that were very J.Lo. The capsule collection had crystal-encrusted open-toe booties, snakeskin gladiator heels and even a pair of embellished wedge sneakers.

For an earlier project with Kanye West, the “Cruel Summer” shoes exuded that hip-hop vibe. It was such a hit that it was even spotted on Celine Dion.

Another recent collab that’s super fun was the one with Christian Cowan, which included sneakers and heels sporting watches instead of regular shoe straps. These shoes were for the 2019 NYFW runway and caught the attention of Cardi B.

For Spring-Summer 2020, Zanotti’s playfulness and the attitude toward creating trends instead of following them are ever-present.

I liked the Lilium shoe with the floral detail. With the Sandrine and the Phoebe, you have everything from day to night. The former can be for parties and formal events, while the latter can be for dressy afternoons or just when you need to style up a pair of jeans.

You can grab a pair of Zanotti shoes via Net-A-Porter, Luisaviaroma or Farfetch.

On riarecommends.com, see what really happens when a Giuseppe Zanotti shoe is made!