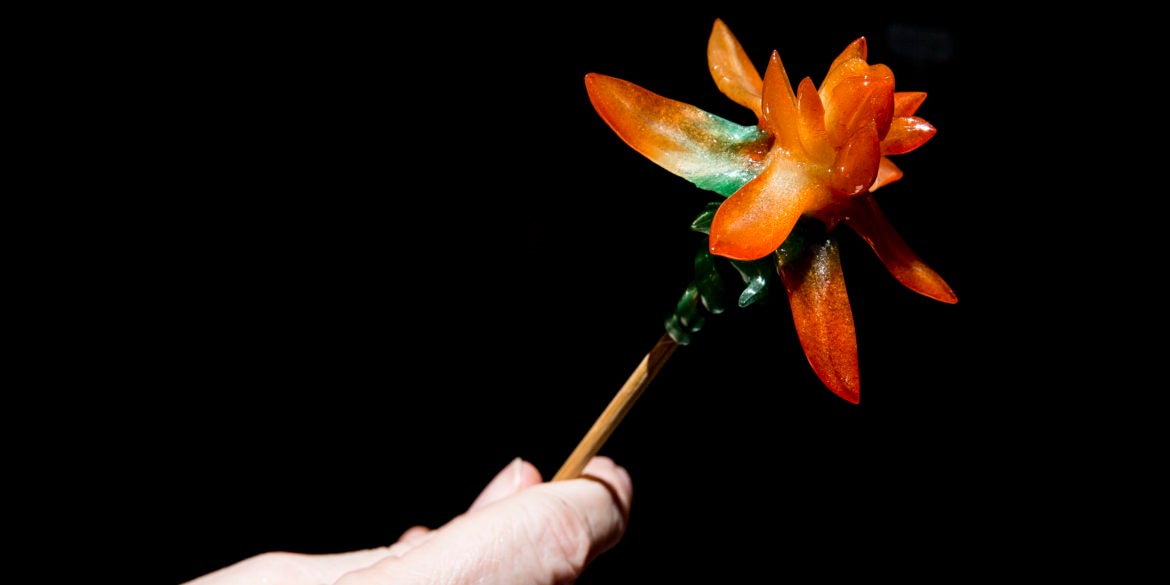 This photo taken on June 6, 2019 shows shopkeeper Louis To displaying a flower-shaped piece of candy for sale at his shop on Cheung Chau Island in Hong Kong. - The shop on Cheung Chau, a small island in the waters west of Hong Kong's famous Victoria Harbour, has become a must-see for visiting tourists. (Photo by ISAAC LAWRENCE / AFP)

Using a pair of scissors, a blow pipe and small metal tools, Hong Kong shopkeeper Louis To whittles a chunk of molten sugar into a dragon, a talent he began honing during China’s Cultural Revolution.

To’s shop on Cheung Chau, a small island in the waters west of Hong Kong’s famous Victoria Harbour, has become a must-see for visiting tourists.

There they can watch a man locals dub “The Candyman” sculpt sugar into a host of animals and fantastical creatures.

The technique is a centuries-old folk art form in mainland China but there are few people in Hong Kong with the knowledge or skillset.

The origins of To’s art go back to the deprivation of the Cultural Revolution when he learned to make his own toys.

“During this period, there was no food, there was nothing,” recalled To, who was born in Chaozhou, southern China. “So when I saw other children with toys, I tried to make replicas for myself.”

He remembers being transfixed by the local sugar sculptor who would come to his neighbourhood on a bike and using little more than a kerosene lamp and a few chunks of coal would magic up candied works of art.

“I had no money to buy candies, but I watched the craftsmen make it,” he told AFP. “I remember very well how he proceeded, in every detail.”

To’s family moved to Hong Kong in the 1980s when China began to open up after Mao Zedong’s death.

He wasn’t a good student and dropped out of school to pursue a career as an artist.

But it was only when he moved to Cheung Chau island with his own family in the early 2000s that he switched to sculpting sugar.

While Hong Kong is best known for its dizzyingly dense collection of skyscrapers, many of the territory’s outlying islands have a distinctly laid-back, rural vibe to them.

Cheung Chau has few buildings higher than four stories and life is more traditional, built around the local fishing community.

“In Cheung Chau, I saw many things that reminded me of my childhood — ﬂying kites, lion dances… things that you don’t see in the city, only here,” To said. “And I remembered that I wanted to craft candies.”

With no recipes to guide him, To started experimenting himself, melting all kinds of sugars.

“For six months, I tried at least a dozen of them,” he explained.

Eventually he struck upon the right technique to get the sugar pliable enough to sculpt.

“I had blisters on my hands. I almost gave up,” he recalled.

Now he is able to knead sugar dough at 80 C with his bare hands.