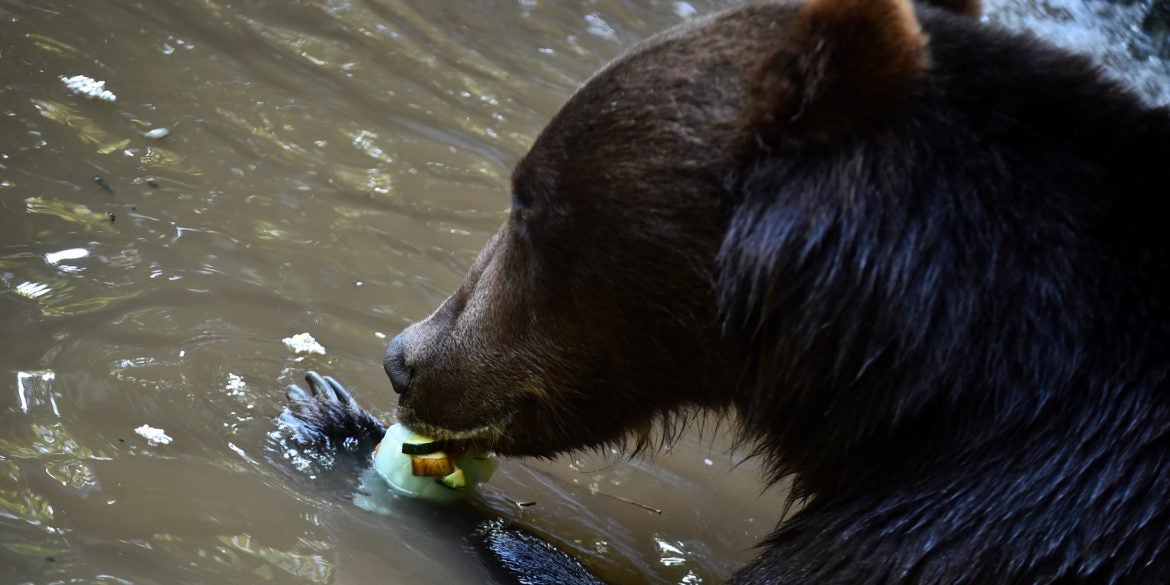 A grizzly bear 'Ursus arctos' cools off with a snack of frozen fruits in a pool at the zoo in La Fleche, north-western France on August, 4, 2018, as a heatwave sweeps across northern Europe. (Photo by JEAN-FRANCOIS MONIER / AFP)

Grizzly bears and humans will compete in tests of “strength, speed and stamina” on a new television show, the Discovery Channel announced Thursday.

Human contestants will attempt “challenges inspired by what bears do naturally in the wild,” including rolling giant logs, tree-climbing, eating competitions and a “monumental game of tug of war,” the channel said.

On that occasion, some viewers were left underwhelmed when the program featured Phelps swimming solo, shown alongside a computer-generated image of a shark.

This time, competitors on “Man vs Bear” will come face-to-face with bears in the final challenge, entitled “Human Prey.”

However, the humans will be encased within a giant steel ball, which the bear will attempt to roll into a crater while the challengers try to hold their ground.

Staged fights between bears and humans, including wrestling and boxing, were popular in Victorian times but largely disappeared in the 20th century over concerns about animal cruelty.

But program-makers said the animals on “Man vs Bear” are never forced to compete, and are “rewarded handsomely with their favorite treats before, during and after every event.”

The competitions are “designed around the exercise routines they regularly follow — a combination of encouraging natural Grizzly instincts and actions,” it said.

The program is filmed at the bears’ Utah wildlife sanctuary, in the presence of animal welfare consultants.

According to its website, the center has provided animal stars for television shows and movies including “Game of Thrones” and “Dr Dolittle 2.”

Two of the bears featured on the show were rescued by a park ranger after being orphaned by an Alaskan poacher, while the third was born into captivity.

The show premieres on December 4.