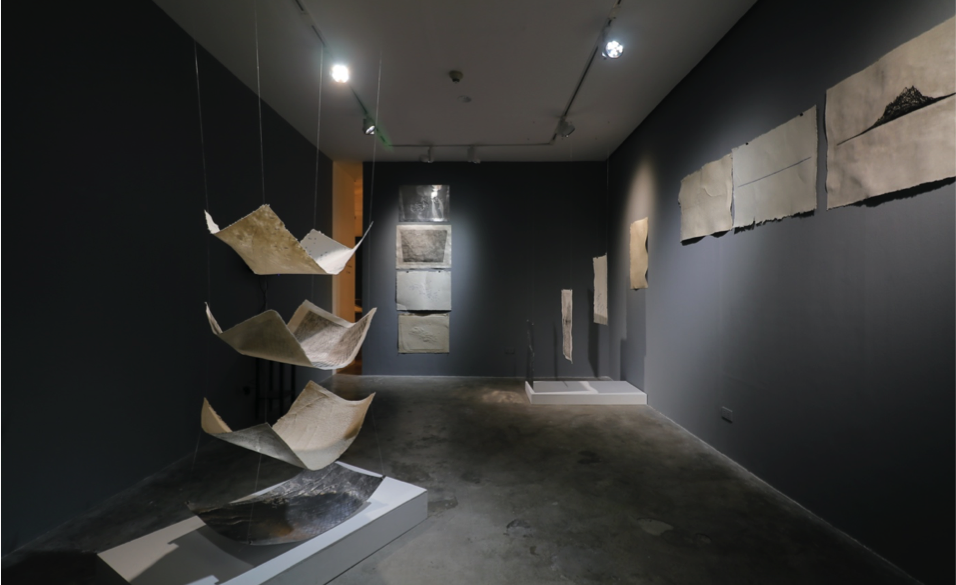 In Celine Lee’s solo exhibition, A Surface, aluminum, the most abundant metallic element in the Earth’s crust, was used as a malleable sheet of metal. With a topographic wireframe image of the Philippines on hand, the aluminum sheet is then etched to print the image onto abaca paper, beaten to make a carbon copy on rice paper, and cast using the combination of both papers.

Below, I talk to Celine about territory, craft, and experimentation.

Can you tell us about this body of work, its conceptual themes, and how the works in the show figure in your current thought process and preoccupations with regard to art-making?

“The exhibition is an attempt at pointing out the awareness of space, or lack thereof. I used abaca and rice paper to establish territorial markers for the Philippines and China, respectively (because abaca paper is mainly sourced here in our country, while rice paper, in China). I wanted to highlight how different they are as a support. As for the use of aluminum, the idea of it being the third most abundant metallic element on Earth, thus used popularly all over the world, was perfect to use for my concept. I wanted to highlight how aluminum was scratched and beaten, ultimately exploited, to produce three different outputs on each of the support. I guess what I’m trying to say is that beyond territorial markers and territorial disputes, there is something greater at risk, which is to say the whole of the Earth is in exploitation.

“The idea of the Philippine topography as the images was mainly to focus on where we are (where the viewers of the exhibition are). ‘Fig. 3 Bird’ is actually a topography of Bonifacio Global City in Taguig because it’s where the opening/exhibition took place. For ‘Fig. 1 Worm’, it’s the whole of the Philippines but looking through beneath the surface. It’s good to note that I used a 3D software to render these wireframe images. For ‘Fig. 2 Man’, it’s a Man’s eye view of parts of Northern Luzon. Lastly, ‘Fig. 4 God’, is a view of Luzon at side view. Each of the sets have the same process.

“The use of the image of a wireframe can be traced to the concept of spacetime which is a common ‘theme’ in my body of work. To me, it is similar to the way coordinates are presented on the world map. Where you are situated now has a specific numerical correspondence in the geographic coordinate system. It just fascinates me how a single point or a single line, when repeated, can make a complex image. It’s like atoms and the whole universe.”

These works address the problematics surrounding land and territory, which is a very politically-charged issue. Where do you see the political climate factoring in your practice?

“Though there is that political layer to my exhibition, I would consider it to be personal as well. Since I am part Filipino and part Chinese, there is a part of me that feels stuck in one plane, in one surface, unable to deviate from where I am. The point of it being printed on abaca instead of rice paper is because of boundary. I grew up and lived in the Philippines my whole life and it’s not that I am forever stuck in the Philippines, but you can’t take away the fact that even though you veer away from Manila, or anywhere in the world you grew up in, you’ll always be bound to that place, one way or another.

Since I am part Filipino and part Chinese, there is a part of me that feels stuck in one plane, in one surface, unable to deviate from where I am.

“Choosing to carbon copy a more abstracted or a vague image onto the rice paper (but still choosing the image based on the existing lines), however, is because of me being part Chinese and because of China trying to make their own marks, their own territorial markers in the Philippines – with or without the right to do so. Lastly, choosing to cast it on handmade paper made of both abaca and rice paper is to emphasize the attempt to get out of the surface, but still couldn’t because it’s still not completely a three dimensional object; it’s just embossed.”

Here and in some of your previous work, like those that make use of thread or thread-like material on cloth and paper, there is an immediately visible employment of craft. How important to you is this quality of the “hand-made”, perhaps both the process of it and its aesthetic?

“I find that the act of painstakingly doing my artworks actually gives me a momentary peace of mind. It’s not that I suffer from any mental illness, but I just find it satisfying to do things (in a repetitive way) by hand. I find it similar to walking alone. You walk from point A to point B in the same way it takes to stitch from one hole of the cloth/paper to another, thus forming a line. If you multiply that act, you are able to create a form.

“For this show in particular, I focused on the whole process of things from making the paper down to all the marks you see on the paper/aluminum. It’s my way of sensitizing myself to whichever process I am undertaking for my artworks. To add to that, the concept of ‘a surface’ is the constant ‘looking at things at face value.’ Even I am not exempted from this. Even the exhibition is not exempted from it. I wouldn’t claim for my show to have achieved otherwise, but it is the attempt in the layering of things and layering of surfaces that might give me that depth.

One component in the show is the video that shows, among other things, how the pieces were made, the process behind them. Did you intend it to be supplementary documentation or, conversely, a distinct piece in the show? How did you decide that the video should be shown alongside the other works?

“The video is a supplementary component rather than a distinct piece. More than anything, I wanted to focus on the act of things being done. I wanted to emphasize the act of creating and destroying and I believe that showing them through video is taking the viewers with me to a time before they are able to see what they see in the exhibition.”

The show is divided into several distinct quadrants, with each set-of-four works forming their own contained polyptych. Was there a particular significance to this format? How do you envision the exhibition functioning as a conceptual whole vis-a-vis a spatial juxtaposition of various objects?

“I’ve mentioned the titles of the sets in the show in my previous answer and basically the way I presented each set refers to perspective (Worm’s Eye View, Man’s Eye View, Bird’s Eye View, God’s Eye View). Like I said in my previous answer as well, the exhibition is an attempt at pointing out the awareness of space, or lack thereof. I want the viewers to look at the exhibition as if they were ghosts walking into the space in that they are neither a worm, a man, a bird, nor a god. In addition, I treat most of my works as experiments of sorts, so the way I titled the works is based on the way images are presented in books. It is supposed to be of the past, present, and future. All art is, after all, a testament.”

Celine Lee’s A Surface is on view at MO Space until November 17.