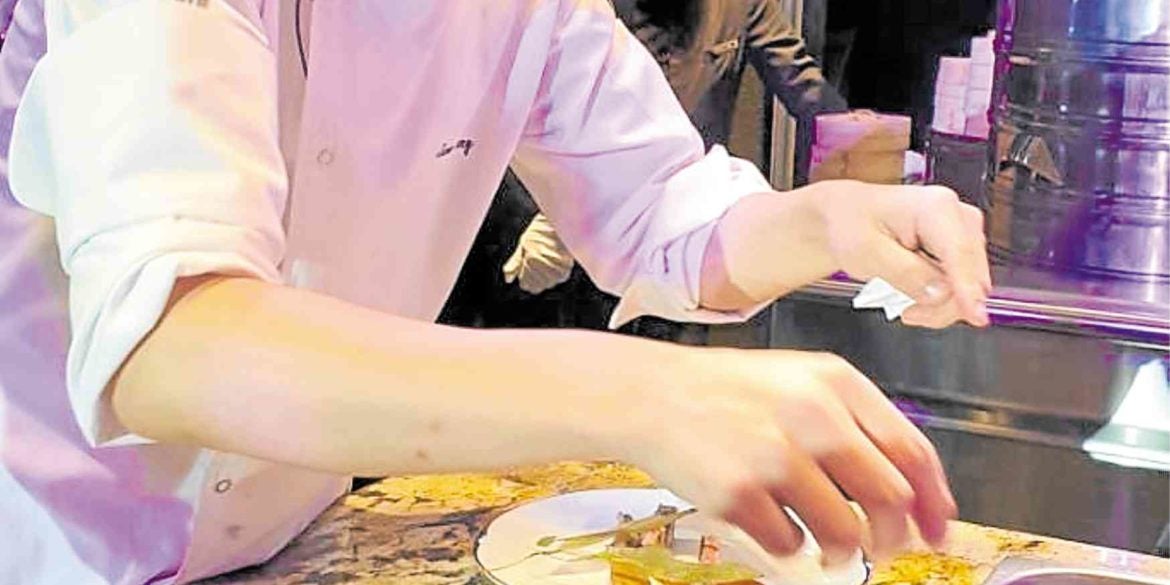 It’s Thursday and I’m off to Seoul for Kitchens of the World, the curated culinary tours I designed with local chefs and food celebrities who prepare one-of-a-kind gustatory experiences for my travel group.

On this trip I bring the lingering flavors of dishes prepared by one of Korea’s most vibrant chefs, Jang Jinmo. These are flavors I can’t wait to savor once more.

Jang was in town to whip up a feast to commemorate 70 years of diplomatic relations between Korea and the Philippines. The event was hosted by South Korea Ambassador Han Dong-man.

It was a privilege to savor Jang’s delicate cooking. His masterful seasoning brought out the finest in every ingredient.

The appetizer and the fish course were paired with Baekseju, a Korean glutinous rice-based fermented alcoholic beverage infused with ginseng and 11 other herbs.

The Korean-style beef was served with Bokbunjajoo, a black raspberry wine. The wine, an acquired taste, was a perfect match to the meat.

Modern but rooted in classics

The next day, I met up with Jang and talked about his restaurants, projects and what the future holds.

He owns Myomi, a fine-dining restaurant that showcases artistically plated modern Korean cuisine but rooted in the classics. These recipes, he said, are hundreds of years old, resurrected through research and the help of other chefs and culinary historians.

His plates are like picture books that tell a story and convey an idea. His menus follow the season.

The food-and-wine pairing was a collaboration with a wine importer. Jang’s food is also featured at Les Clef de Crystal, a wine bar in Seoul specializing in French cuisine, which he focused on after leaving Korea for Canada.

It was Canada and more travels that made him realize that food was his passion, not engineering as he and his family thought.

By month’s end, his casual-dining restaurant will open in Seoul, which he conceptualized upon the prodding of childhood friends who want to enjoy his food at lower prices.

Jang has his hands full with three restaurants, but he still pursues projects that pique his fancy.

He was chef consultant of the Korean drama “Temperature of Love” and hosted his own TV show.

He also represents Korean culture internationally through his cooking. He believes it’s important for the next generation to uphold his country’s food traditions and keep the old recipes relevant.

Korean food is rich in history—complex, multifaceted, diverse. We have barely scratched the surface. Through chef Jang’s cooking, we have moved a step closer to knowing it.

Snapper or any white fish such as grouper and bass

Filet the fish. Sandwich the filet between konbu. Wrapping in konbu gives it better flavor.

Refrigerate (1°C) for  2-3 hours. The fish should have developed a sticky film by this time. When you see this, that means the fish is ready.

Remove konbu. With paper towel, pat the the filet dry.

With new sheets of paper towel, roll to wrap the filet and freeze for 1-2 hours.

Transfer fish to the fridge and keep for 12 hours. The fish is now ready for sashimi.

Slice fish thinly, as you would sashimi.