‘Cats’: Joanna Ampil’s ‘Memory’ is one for the books | Inquirer Lifestyle ❮ ❯ 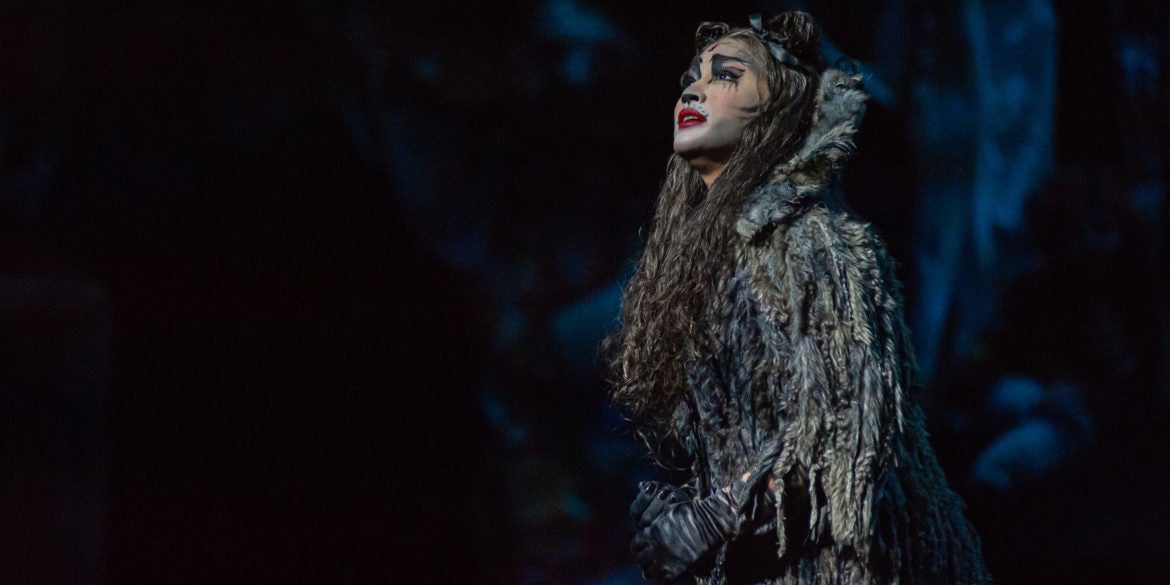 ‘Cats’: Joanna Ampil’s ‘Memory’ is one for the books

One main criticism against the Manila premiere of Andrew Lloyd Webber’s “Cats” nine years ago was its lack of clarity. Not only did “many of the songs sound unintelligible,” as former Inquirer theater editor Gibbs Cadiz wrote about the Asia-Pacific touring production, the musical also came across as directionless carnival entertainment.

None of those problems are evident in the current Asian tour of “Cats” at The Theatre at Solaire.

A character in Tony Kushner’s “Angels in America” summarized this musical best: “It’s about cats. Singing cats!” And dancing ones, too, as the story gathers its anthropomorphic felines to decide who will proceed to a new life (because, you know, they get to have nine), the resulting revelry resembling a theater-school bacchanal, with high kicks and high Cs in place of inebriation.

What constitutes the score is basically a bunch of poems by the literary luminary T.S. Eliot set to melody, each song devoted to a particular cat, all of it essentially “audition pieces,” as the cats vie for that once-a-year chance at rebirth.

It’s all silly song and dance, and it’s this perceived plotlessness that can understandably turn off viewers in search of more, shall we say, formalist offering.

But nowhere in Lloyd Webber’s oeuvre is the art of make-believe more vital and accorded such high regard than in this musical, which arguably also features the composer’s most accomplished, eclectic score, the genres spanning gospel to burlesque to Elvis-inspired rock to traditional Broadway anthem.

And this touring production delivers Lloyd Webber’s songs with remarkable crispness. Mathieu Serradell’s musical direction is, in truth, the inadvertent star of the show.

The achievement extends beyond plain singing (which is expectedly terrific). It includes the choices of phrasing (individual and choral) and modulation, and bits and pieces of instrumental tinkering, that collectively make this production sound like a reinvention most worthy of a brand-new recording. And making the score of a grand old dame of musical theater sound like a completely new piece is no mean feat.

It is remarkable, too, how the songs here come across as occasions for true-blue storytelling, and not just for bombastic theater—for instance, Elizabeth Futter (as Jellylorum) and Andrew Keelan (as Gus) turning “Gus: The Theatre Cat” into a genuinely affecting moment of nostalgia; or Erica-Jayne Alden (as Demeter) and Alexandra Wright (as Bombalurina) infusing “Macavity” with a real sense of loathing and danger.

It also helps that this production takes after the latest West End and Broadway revivals in omitting the self-indulgent “Growltiger’s Last Stand” and putting “The Awful Battle of the Pekes and the Pollicles” after “Gus.” Such changes only serve to tighten the show, the once “Awful Battle” now actually making narrative sense.

The dancing here is nothing short of mesmerizing, the choreography at times spilling across the theater, which has become testament to the lengths that stage technology can be pushed: lights sprawling all over the ceiling, a gigantic tire rising from the iconic junkyard set.

But the real spectacle remains human in form. The 10-minute-long, Act I dance-o-rama titled “The Jellicle Ball” is still a thrilling highlight, while the sight of Harry Francis effortlessly executing to perfection those 20-plus balletic turns in “Mr. Mistoffelees” is simply breathtaking.

Of course, the main draw for Filipino theatergoers should be Joanna Ampil’s turn as the faded glamour cat Grizabella—a role the acclaimed actress has already performed across Europe and China.

Grizabella gets to sing the 11 o’clock number “Memory,” which immediately secures her the ticket to rebirth. And in Ampil’s hands, the song becomes one of those exceptional moments that musical theater worshipers live for: The way she deliberately mines its dramatic arc infuses the number with palpable pain and sorrow, and the climax is a potent tug at the heartstrings.

As emotional highlights go this year, Ampil’s rendition of this song is clearly one for the books.

“Cats” runs until Dec. 1 at The Theatre at Solaire, Pasay City; ticketworld.com.ph