A family with an advocacy can change the country | Inquirer Lifestyle ❮ ❯ 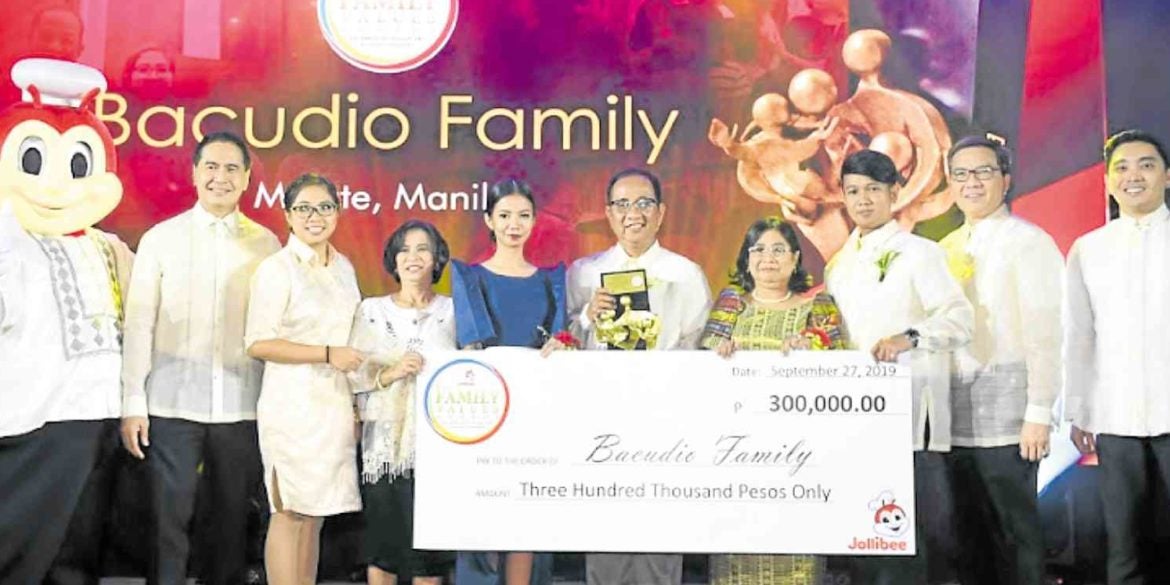 Starting from a garage, the Bacudio Family’s Dagdag Dunong Project has transformed into a library facilitywhich now provides workshops and storytelling program to more than 100 children.

A family with an advocacy can change the country

For the last nine years, my holiday seasons have been heralded by the celebration of the Jollibee Family Values Awards.

As judges, we sort through numerous noteworthy families and their advocacies until we find the ones who best embody the Filipino values and virtues we grew up with and still wish to see today.

The awarding is always a night to look forward to, as the winners show how just one family can transform a community and society with their dreams for a better tomorrow.

This year, six families were chosen as principal awardees and four others as special citation awardees.

The first of the principal awardees, in the field of education, is the Bacudio family from Malate, Manila. Virgilio and Ana Maria Bacudio have three children—Amiel Ver, 34; Ansheline Mae, 29; and Arvin Ver, 22.

In 2006, the Bacudios launched Dagdag Dunong Project, which saw the transformation of their garage in Malate into a library along with a reading room for children. They’ve also given other material donations to the Mangyans of Mindoro, with the Jeepney of Hope project.

The young Bufi family of Taguig City—Rey and Mary Grace and their child, Likha Miguel, 2—had a vision to use storytelling to spark hope and inspiration amid challenging times. This gave rise to “The Storytelling Project” (TSP) in 2012, an initiative focused on teaching literacy and bringing the joy of reading to far-flung communities with scarce resources.

TSP has grown into a community of passionate volunteers. The TSP program has trained 5,000 teachers and catered to over 10,000 children.

The Mansing family of Negros Oriental—family matriarch Dorotea Mansing, 76, and children Arlene Mansing-Nuico, Zacarias Mansing Jr., Angelyn Mansing-Silao and Dorothy Mansing-Sapan—is engaged in school outreach programs, the flagship of which is the Book for Kids Project.

Founded in June 2017 as a response to the Department of Education’s Brigada Eskwela, this project is focused on donating children’s books to public schools, especially those in remote areas across the country.

Having two disabled family members, the Mansings also give motivational talks that promote disability awareness, along with other advocacies as antibullying, inclusive education and positive Filipino values.

Book for Kids has reached over 200 public schools and 45,000 students across the Philippines. It has also donated almost 20,000 books.

The Montano family of Quezon City—Alvin Montano and wife Sandra Sanchez, and children Joseph Daniel, 21; Michael Angelo, 16; and Stephanie Amanda, 9—stood out as winners in the field of disaster preparedness.

The Cheers (Community Health Education Emergency Rescue Safety Services) Foundation was born of the experience of Sandra, a survivor of the 1990 earthquake in Baguio City. She realized how unequipped the country was in terms of calamity preparedness.

Through Cheers, the family has been conducting outreach and disaster training programs. It has also developed a product to help address the need for food during calamities.

The foundation has conducted more than 130 training activities each for capacity building and basic first aid, which an estimated 100,000 people have attended.

Jerome and Zenaida Paler, and their children, Jezzene Gail, 28; Jersen Jerome, 25; and Jergin Stefan, 21, of Southern Leyte, have chosen to take on the crucial advocacy of drug rehabilitation.

Following the war on drugs in 2016, there was an overwhelming number of drug users who voluntarily surrendered in Maasin City. This led the family to start the Project Renewal and Recovery from Drugs or Rehab Without Walls—a six-month community-based, therapeutic rehabilitation program.

The beneficiaries of the program are called “aspirants” to veer away from the negative connotation of being a drug user surrenderee. The venues of the sessions are called community care centers.

The program designed by the Paler family has served as a template for other communities to replicate.

Dr. Jeson Viñas, wife Fretzel and their daughter Jeanne Clair, 17, are the winning family in the field of health.

Since 1996, Dr. Viñas has helped underprivileged communities as an optometrist.

When he got married in 1999, his wife joined him in medical missions. Their daughter Jeanne eventually joined when she was old enough to help out.

The Viñas family came up with the tagline, “Malinaw na Mata Para Sa Maliwanag na Kinabukasan” (Bright Eyes for a Brighter Future), which serves as their mission statement in conducting eye missions for underprivileged youth.

It has been their goal to give free eye checkups to deprived and neglected schoolchildren.

Following are the special citation winners.

It all started when Edgar, a high school teacher, noticed that one of his top graduating students was eating only kamote for snacks and lunch every day.

Project Scholar has supported more than 80 college scholars, while Project Adamms has supported 25 Mamanwa and Manobo high school students since 2018.

As a former scholar and now a teacher, John Mauro has always extended help to students from poor families, drawing from similar experiences at a young age. This was amplified when he met a 9-year-old Aeta who didn’t understand Tagalog and had no basic literacy.

With the support of his family, he founded I-Saved (Saving Vulnerable, Education and Dreams), a Sagip-Bata para sa Edukasyon Program registered with the Local Youth Development Office, in 2017.

The family conducts programs to alleviate hunger and other household problems which helps the children perform better in school.

The family has provided literacy and tutorial programs for a total of 320 student beneficiaries from the Aeta community, and students from five chosen schools in Cagayan.

Drawing from their own experiences as orphaned children, the Plaza siblings formed Amihan sa Dahican in 2004 to provide support for children in need. Their advocacy aims to send underprivileged children to school and to protect the marine wildlife of Dahican, in Mati, Davao Oriental.

The family brings in children to stay with them while sending them to school. They also teach the kids to help protect the marine wildlife of Dahican by building pawikan hatcheries.

There are 25 children under their care.

From Bulacan are Rhamley and Natalia Sali, with children Mikhail Harbey, Klaude Niklaus and Ayesa Agniezka, special awardees for the field of environment.

The Salis have always been environmentalists, which they got from the matriarch, Natalia, a social worker. Thus, the One Child One Tree movement was launched, an initiative of the Fostering Education and Environment for Development (FEED) Inc., with Natalia as FEED ambassador.

FEED has been supporting environmental Projects in Hagonoy, Bulacan.

Every year, we are faced with a new batch of families who show us that no matter how daunting the situation our country faces, there is always something that can be done.