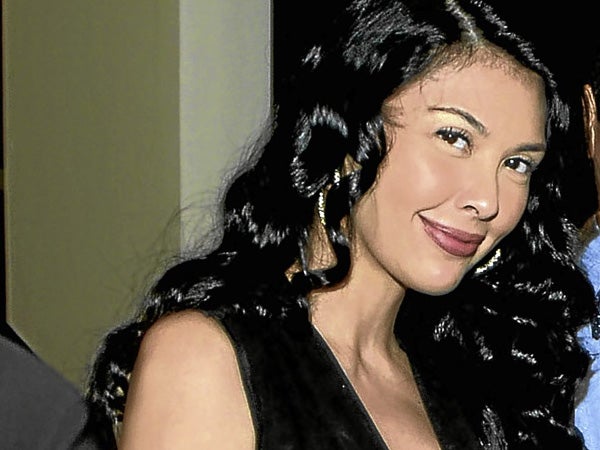 More of Cupid’s hits and misses

Saw the gorgeous Concert Queen Pops Fernandez at an event recently, soloing it.

“Where’s your date?” I asked her. “Please find me one,” she told me, laughing. “You still looking for Mr. Right?” I continued.

“Yes, Mr. Right! Wish he comes along soon, whoever he may be. But I promise you’ll be the first one to know,” she said.

Another old-rich socialite, adorable Susie Madrigal Bayot is looking radiant and absolutely happy these days. “It’s like coming out of a thick fog and suddenly the sun is shining bright and happiness fills her newfound freedom,” her close pal described her.

It looks like a bad-aim year for Cupid with another breakup of a hot twosome, night-life prince and young club businessman Erik Cua and head-turner Regine King. The two had been thought to be headed to the altar, but it didn’t turn out to be so. They had their ups and downs, but the two have finally split.

Another cozy twosome, gorgeous actress Ruffa Gutierrez and dashing international businessman Eduardo Puertas, had been thought to make the perfect couple. But the match fizzled out after a little over a year.

“Ruffa and I are still in contact with each other, and we both are still good friends. But sometimes things just don’t work out, so we both decided to go our separate ways,” Eduardo told me when I bumped into him at Lusso in Greenbelt 5.

Is there a new romance in the life of mi amiga Bea Zobel Jr.? Well, it’s all speculation for now, but the new man in her life may be the tall dashing Spaniard Fernando Masso, a businessman and photographer.

But, here we go again darling, Bea’s heart still belongs to her old flame, “the love of my life,” she said. Whatever, I only wish her the best. For Bea and mi amigo Joel U., perhaps there may be truth in the saying, “Love is better, the second time around.”

It’s a different ball game altogether for world-class and renowned international bag and fancy jewelry designer Bea P. Valdez, who is about to be a mother for the second time. Her love child’s father is, again, none other than the well-respected Archie Rodriguez.

Bea does not believe in marriage after taking that path several years ago. But Archie wants her to be his “wife for life.” Well, it’s crystal clear that their love for each other is stronger than ever, the way Bea wants it to be.

This much I’ll say, palangga. Whatever makes you both happy, and whatever that magic formula is that has kept you both together, keep it up.

As for Bea’s sister Margo Valdez, she changed her last name to that of handsome TV star TJ Trinidad’s last year, only after a two-year romance. Two sisters in different paths, but finding happiness in their own way, by practicing what love is all about, palanggas.

Stunning beauty Roseanne Prieto and ace basketball player, trés charmant Danny Siegle, are still in love, but “not yet ready for marriage,” Roseanne told moi, despite their being together for seven years.

“Whatever happens, que sera, sera!” Vicky told me while in the arms of her prince charming.

I’ll start off with businessman of all seasons and top golfer Johnny Velasquez, and eye-catcher Maripi Muscat. Both were on the same boat, having come from previous relationships, but they jumped ship before love turned to hate.

Now, after 19 years of happily being together as lovers, the flame burns on. “No marriage in sight?” moi asked them. “No way. Been there, done that, enough of that! We are both happy with the relationship we have,” Maripi said.

Next, we have woman of substance and stature, charity-oriented Maricris Cardeñas Zobel, and handsome businessman and polo player Iñigo Zobel, who celebrated 32 years of togetherness two weeks ago.

And last, but definitely not the least, is my adorable soulmate, Vicky Fernandez Zubiri, with a figure, energy and attitude that would make those younger green with envy.

Naturellement, they have had their ups and downs, but Cupid has refused to give up on Vicky and Bukidnon Vice Governot Joe Zubiri. They will be celebrating their 50th wedding anniversary on June 29.

I asked them where they would celebrate the “miracle” (Vicky is a Capricorn and Joe a Leo, get the picture?)

“Maybe abroad with my whole family and grandchildren, and a chosen few true friends who stood by me and Joe during our rough and good times,” Vicky replied.

There you have it.  Whether Cupid hits a bull’s eye or misses, just move on and don’t look back!

Visual artist, writer, concert producer and businesswoman Maria Victoria “Marivic” Rufino is holding her 17th solo exhibit of new mixed-media works at the Peninsula on February 22. The exhibit is “Romanza II, Dreamscapes 2012,” the same exhibit she had in Madrid at the Museo Nacional de Antropologia last year, in celebration of Mes Filipino and the 150th birth anniversary of Dr. José Rizal, which was presented by the Philippine Embassy in Spain.

“Romanza II” will include “soft art” such as lamps, furniture, pillows and accessories.