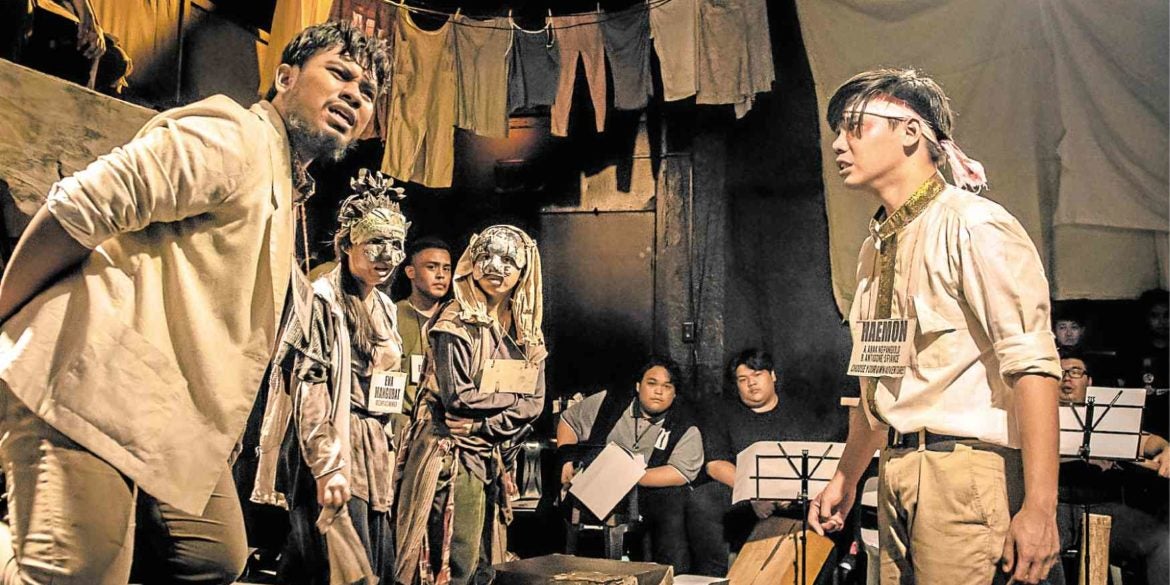 How often does it happen that a production staged mostly by theater newbies leaves you thoroughly enthralled by curtain call, and beyond excited for its playwright’s next work?

Rarely, actually, which is why, on that account alone, Tanghalang Ateneo’s (TA) “Antigone” becomes one of those pieces of theater that shouldn’t be missed.

Those familiar with the eponymous Greek tragedy by Sophocles upon which this play is based will be in for a wonderful surprise with this lucid and concise Filipino-language adaptation by Sabrina Basilio. Those entering the theater cold will nonetheless stumble upon a production of admirably outsized virtues.

Basilio’s script is key to “Antigone’s” success. Before this production, she already has three indelible turns this year as featured actress—as the abused Martha in Ateneo Blue Repertory’s “Spring Awakening” (stealing the spotlight with just one number—“The Dark I Know Well”); as the activist Chedeng in TA’s “Dolorosa”; and, most remarkably, as the very convincing Japanese girlfriend of the male lead in the Virgin Labfest’s “A Family Reunion.”

That the actress is just as capable a playwright is one of “Antigone’s” many pleasures.

The crux of Sophocles is its titular character’s defiance of the king’s edict to disallow any form of burial for her brother, who died an enemy of the state.

Basilio places this story under her microscope, then weaves around it a world of her own—Sophocles deconstructed, a post-“Antigone” “Antigone.” The warring elites of the original have all fallen from grace, the once powerless citizens in the background now in power, anarchy the new name of the law. Everyone involved in the whole royal-versus-royal shebang is made to stand trial in the people’s court, in a performative arena where the convicts are made to “reenact” their crimes for the benefit of the viewers.

A fundamental parallel is first drawn between the felonious burial in Sophocles’ play and that of the dictator Ferdinand Marcos’ in the Libingan ng mga Bayani three years ago. From there, Basilio crafts more parallels between the original and her adaptation, those ancient, almost abstract issues resonating with the horrors of the present.

The result, now titled “Antigone vs. the People of the Philippines,” isn&apos;t exactly wholesale narrative transposition, but an organic mirroring of present-day Philippine politics in the events and dialogue of the play. How Basilio is able to entwine the drama of real life with her fiction in a way that doesn’t feel strained at all is perhaps the play’s most admirable achievement, a paragon for those who aspire to write political theater.

This “Antigone” also succeeds in demarcating class, and the subtle infusion in the dialogue of the “conyo” sensibility—that mixed tongue of English and Filipino that has always been a point of mockery against affluent schools such as Ateneo—adds a surprise meta dimension to the production.

The technique involved here is also breathtaking: Basilio tells her story through an amalgam of prose dialogue and “balagtasan” poetry, and the latter is a gold mine of unexpected rhymes that should make literary aficionados swoon.

Even more swoon-worthy is how the cast performs the verse as natural dialogue, the poetry coming across as pedestrian language, which only further highlights the skill involved in the writing.

The production is a whole other matter, of course, this being run by a cast of new recruits to the company. In Tata Tuviera’s retaso-laden set that grants the production a low-key apocalyptic aesthetic, the cast performs with a raw energy that director Tara Jamora Oppen understandably has some difficulty containing and modulating, but what strikes you by the end is the multitude of promising talent that can easily be groomed for the stage.

This rawness is further reflected in this production’s major shortcoming—its lack of mastery of “order in chaos,” especially in the sequences portraying anarchic disorder, but also in the percussion-heavy sound design that, though enhancing the primal atmosphere, tends to drown out the dialogue and action.

Still, the overall picture is an immensely gratifying one. And by curtain call, avid theatergoers can breathe a confident sigh of relief: The future of Filipino theater is indeed in safe hands.