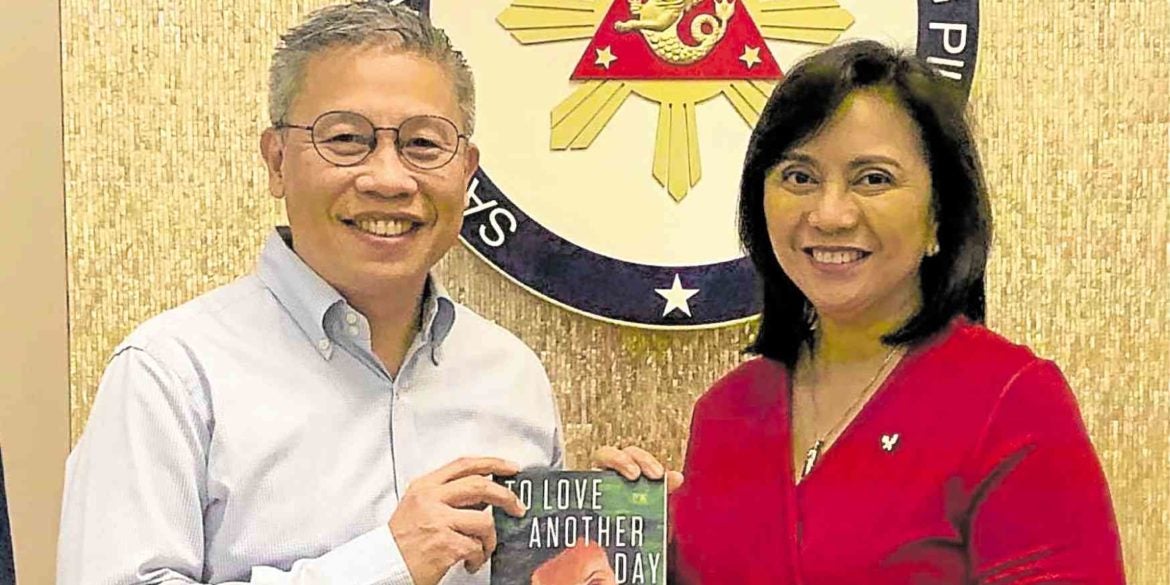 Filipino women, in case you haven’t noticed, love to walk into the lion’s den, often times, without the lion knowing it

Vice President Leni Robredo said this candidly, so naturally, when we asked her what made her accept the President’s offer to her to head this administration’s “antidrug” campaign.

She recalled how, when she got the letter of the offer, she knew she had to heed her instinct to accept the challenge. And—just as pressing, she told us—she wanted to know what was really going on, what could be done, and if she could put a stop to the killings, why not. She said that she believed this challenge could have given her a platform to do what must be done.

She had that for exactly two weeks until she was fired.

Last Wednesday, at the intimate launch of “To Love Another Day: The Memoirs of Cory Aquino,” compiled and edited by Rapa Lopa, we sat across from Leni, with other guests, over late merienda that stretched on to dinner. It was an easy, free-flowing conversation where she answered what she was asked.

People were surprised that she accepted the President’s offer, but other people weren’t. It was a bluff, if indeed it was, that had to be called, many people thought—and by a woman at that. Filipino women, in case you haven’t noticed, love to walk into the lion’s den, oftentimes, without the lion knowing it. I guess that’s what sets us apart from other Asian women. Filipino women are free, and are aware of this freedom, to heed their instincts, and rule by them.

And that instinct is so maternal. Did she at any moment fear for the safety of her three daughters? No, she shook her head.

How about her own life? Again, she said, No.

Her spontaneity would have been inconsequential had we not noted one thing: she’s a Filipino woman transformed. This accidental politician undervalued by the political establishment is showing the inner courage that people around her have known that she’s had all along—quite a contrast from the sweet smile that was her default expression when she was thrust onto the political arena.

But we also noted how her instincts are backed by managerial skills, something people don’t know much about this lawyer who used to work with disadvantaged women before the tragic death of her husband, public servant Jesse Robredo.

For instance, she talked about how the information on the antidrug campaign stopped at reporting the number of surrenderees—more than a million—but what came after the surrender wasn’t clear.

Her stint was gone in a blink of an eye, but she apparently spent it with a sense of direction and purpose, like an able manager. She met with the agencies concerned, got some interesting insights, if not information, from their reports, and noted how the campaign indeed needed a manager.

Leni has yet to share with media her two-week experience and her proposals on the antidrug campaign that continues to define the administration. We don’t want to preempt that.

People say that we’re living the new normal, and it’s quite disheartening to describe in graphic detail what exactly is the Filipino’s new normal. That afternoon at the book launch, however, we rediscovered the new woman who gives us hope in the face of the new normal.

For over two decades, Lopa had the unpublished video interviews of his aunt where she talked in detail about the period from 1972 to 1986—the turning point in contemporary Philippine history—and how she and Ninoy and the rest of the family lived those years.

Were it not for the relentless prodding by Cory Aquino’s spiritual adviser, Fr. Catalino Arevalo, SJ, Lopa wouldn’t have retrieved the tapes and transcriptions and compiled this in a book.

Rafael “Rapa” Lopa, now the president and executive director of the Ninoy and Cory Aquino Foundation Inc., was diffident about doing a book on his aunt because he knew only too well how the widow didn’t like drawing attention to herself, a trait, I now realize, which her son, former President Noynoy Aquino, shares with her.

In his preface, Lopa recalled how in 1997, when his Foundation team was working on a Cory Aquino website and was gathering letters and tributes from her friends and kin, he got a call from her. She admonished him, “Tigil-tigilan mo na ‘yan!” and she advised him to focus on foundation work instead.

Later, however, Cory would start working on her autobiography—a work left unfinished upon her death.

He wrote: “Then I recalled a moment in 1996, when Auntie Cory told me that she had already started writing her autobiography. It was meant to be a tell-all book about her life’s journey. I think there was a part of her that did want to look back on the past and document significant events in her life. However, again, being the person that she was, I felt her purpose for writing her life story was not so much to draw attention towards her, but to establish the facts and share the lessons she had learned along the way.”

Indeed, this book must be the closest the Philippines could get to a Cory Aquino autobiography.

Lopa wrote: “This is her story that I’ve been so privileged to have witnessed up close. It always gives me hope when I fall into despair. It humbles me when I feel entitled. It gives me courage when I am paralyzed by fear. It inspires me to be more compassionate when I am tempted to be indifferent. But more than anything, it moves me to love whenever it is most difficult to do so.”

Fr. Manoling Francisco, SJ, officiating at the Mass during the book launch, before he gave the final blessing, expressed hope that this book “To Love Another Day” will give us reason “to believe another day.”

For copies of the book, contact the Ninoy and Cory Aquino Foundation office, tel. 8812-0403 (look for Amor or Puri), email [email protected] By Dec. 2, copies will be available at the Jesuit Communications Office, Loyola Heights, Quezon City.