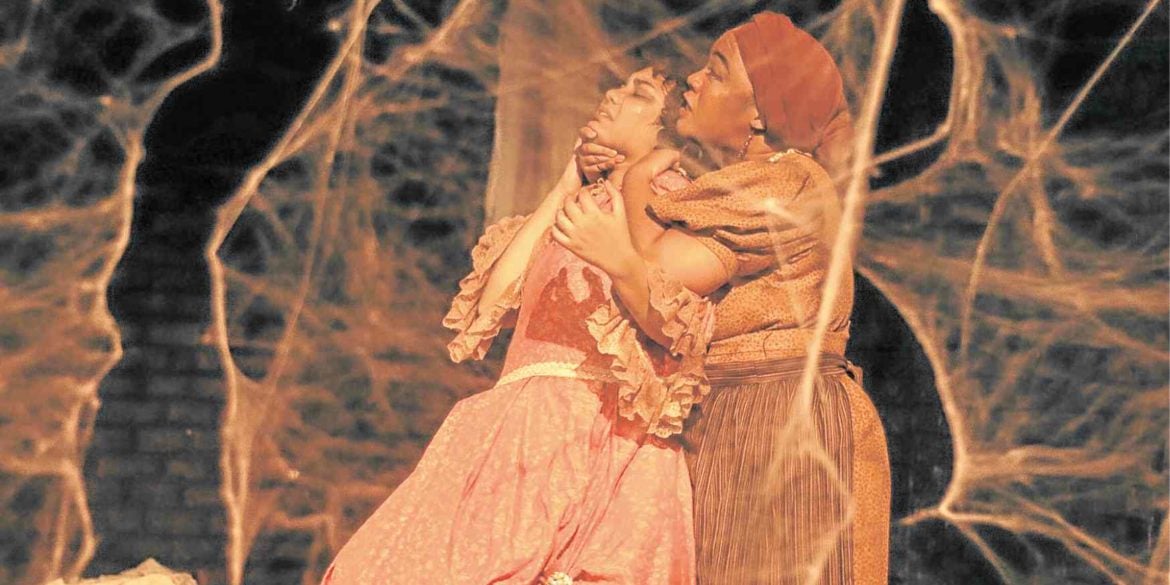 As the first semester of college ends, simultaneous with the calendar year, a cursory survey of campuses over the past few weeks is only opportune. As always, a wide variety of material and styles afforded a nonetheless gratifying look at the sweep of talent and dedication that bodes well for the future of Filipino theater.

It’s not an easy material. It’s actually two one-act plays spliced together by a common principal character and a concern for levels of truth in disparate settings, making for ambiguity rather than comfortable certainty.

Directed by Dennis Marasigan, the students evinced remarkably mature and nuanced interpretations of the issues of faith, patriotism and history running through the play.

Inevitably, there were certain levels of disconnect between the students and their roles (largely a matter of age), but on the whole, the cast ably captured the complex and conflicting sensibilities of their characters.

The first act, revolving around crises of faith, was particularly moving (with special notice to the actors playing the Tasaday youth Lobo and the visionary Sister Emily). Perhaps the requisite heartfelt emotions resonated more directly with the youth of the actors.

The more cerebral second act, on the celebrated Code of Kalantiaw hoax, was less assured. But here, too, the deliveries of the difficult, sometimes vexing, roles were earnestly humane, skirting the temptation for simplistic or judgmental portrayals.

In this era of fake news and historical revisionism, renewed attention to the play can only be apropos, and this thoughtful production was a pleasure to have.

‘Bring It On: The Musical’

A perky musical about cheerleaders, in a very American setting, with a predictably feel-good ending? Ateneo Blue Repertory’s “Bring It On: The Musical” was not calculated to enthuse jaded theatergoers. Plus, it starred the company’s “newbies,” or fresh recruits.

This reviewer was curious that the musical is partly authored by Lin-Manuel Miranda.

What a surprise, then, to find the production enjoyable. The cast’s “newbie” composition was indeed obvious, but sheer exuberance and vitality made up for the relative lack of polish.

It was also a struggle to convey the cultural-minority specifics of the musical. Some leap of imagination was needed to see some roles as African-American.

But the production, directed by company alumni Franco Ramos and Abi Sulit, compensated by drawing clear socio-cultural distinctions between the elite Truman High set and the punk Jackson High milieu.

For a musical that’s supposedly just about cheerleading, it made genuinely affecting points on identity, both sociocultural and personal.

In fact, the cheerleading sequences were not about to win any competition. That aside, how these newbies could sing and dance and emote! For an ensemble piece, it may be unfair to single out names, but special kudos to Giulia Martinez in the lead, and Nikki Bengzon and Eli Alcibar in effective character turns.

Good musicals expectedly deliver entertainment, hopefully along with intelligence. This appealing production did so with panache.

At the University of the Philippines (UP) Diliman, there was a thesis production by two Theater Arts students, Criz Dizon and Rainbow Gutierrez. The play, “A(Flame),” had a rather complex genealogy—a collaborative devised effort (though principally authored by Alexandra May Cardoso) based on the Jean Rhys novel “Wide Sargasso Sea,” itself a sort of prequel to Charlotte Brontë’s “Jane Eyre.”

With all that, one could expect a rich theatrical experience—and it was. Familiarity with either or both novels would have contributed to a fuller appreciation of the play, especially since its development hinged on the fragmented memories and fantasies of a madwoman.

With only hazy recollections from college of the Brontë novel, this reviewer depended on the program notes to supplement what could be grasped from the dialogue, which was not always an easy exercise, but proved to be a rewarding one.

The play, directed by Marjay Manalastas, was simultaneously a woman’s personal tragedy, a harrowing evocation of mental illness, and a meditation on cross-cultural and gender disparities—a potent brew brought to life by the performances.

The staging was striking, a Gothic atmosphere wreathed in cobwebs that evoked the protagonist’s world of intertwined past adversity and present dementia—a world of pain at once hallucinatory and all too real.

Quiet for some time, UP Repertory Company sprang back with “Dada: The Chikka Minutes,” an ambitious production that avowedly tackled a multidimensional portrait of the LGBTQ sector.

The prospect of an overly didactic harangue, coupled with the two-and-a-half-hour running time, might have given pause to a cautious theatergoer.

But the production was engaging in its full length—a series of vignettes, many based on actual stories, but reworked into imaginative, quirky formats. And while the inevitable didactic element was there (more so in some vignettes than others), the play, as a whole, wasn’t in a stating-the-obvious monotone.

Directors Malvin Daniel Ramos and Jasper Villasis employed an impressive range of styles (from a TedTalk to a wordless pas de deux), moods (from saucy to fist-raising political) and settings (from online sex to the obligatory, but genuinely hilarious, gay pageant), all carried off by the cast with flair and sometimes-too-manic energy.

Most of all, there was enormous humanity, as well as memorable turns by Cy Zinampan, in a bravura TedTalk performance, and Stephen Artillero, harrowing as a battered transwoman overseas Filipino worker in Saudi Arabia.

Not all the pieces worked equally well, but collectively, it was a moving tapestry of a sector’s broad social context.

‘Reasons to be Pretty’

Finally, “Reasons to be Pretty,” a thesis play currently running under the Ateneo Fine Arts Department, is about two couples coping with relationship issues, opening with a bafflingly loud and combative scene that this viewer found initially off-putting.

But as the intense interactions in this four-character Neil LaBute play unfold, veering from social comedy to psychological drama, one gets hooked on the spectacle of real persons exposing their flaws and vulnerabilities onstage.

One may take issue with the handling of the play’s specific American working-class milieu, but in the end, the production, directed by Caisa Borromeo, is, above all, an acting vehicle for its cast.

By and large, they rise to the challenge in what apparently are their first major roles, especially as the story progresses, though there are moments when the delivery can still be improved through modulation.

But it is in their individual monologues that the four actors show their mettle, and in these expositions of the play’s themes, their eloquence shines.