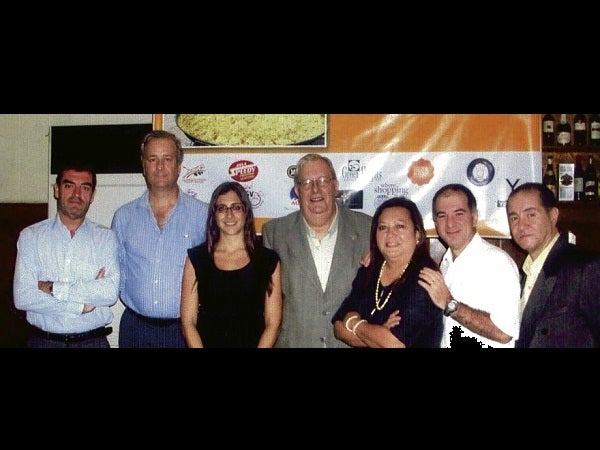 For the first time in 64 years since it was incorporated in 1948, the Sociedad Española de Beneficiencia (SEB) held a fund-raising event at the Casino Español on Saturday, selling paella  to some 500 people who came to pay P700 per ticket to help pay for the medical, hospitalization and burial assistance for indigent elderly Spanish citizens living in the Philippines.   Also being helped in the fundraising are the youth   through medical and dental missions.

In the Saint Maria Josefa Residences along Maytubig St. (behind Trader’s Hotel) in Malate are four elderly residents being supported by the Sociedad.  The rest pay a board and lodging fee that comes from   their families.  Run by the Siervas de Jesus headed by Sister Maritza, the home for the elderly is a pleasant four-story edifice built by the Sociedad and the religious order. For a long time, the residence was only a small bungalow with a chapel attached to the house where residents attended Masses.

Javier Escat, treasurer of the Sociedad, says the society has spread its assistance to include even indigent Filipino elderly. There is a plan in the near future to build another home for the elderly on a one-hectare land in Antipolo.

Paco Gomez de Liano, president of SEB and Casino Español, says that although the Spanish Embassy help SEB with a donation of P2.5 million every year, it’s not enough to support all the areas of assistance SEB wants to give.

It was the first time Chef Mikel Arriet of Punta Fuego cooked paella in a nine-feet paellera, but he took up the challenge for a good cause.  He and the team of chefs of Casino Español started cooking at 3 p.m., while guests watched and nibbled on tapas and danced to the Latin beat of Vito Mismo.

Organizing the event were the Sociedad, with La Camara headed by Miguel Romero Salas as president, Fuego Hotels, and the sponsors, including the Philippine Daily Inquirer.

Lally Hidalgo-San Jose, who is married to a Spaniard, is the executive director of SEB.

The last time international concert pianist Leonor Kilayko was in Germany last year, she was asked to play for the disabled.  The audience appreciated her playing.  The experience with them touched Leonor.  Since she speaks German fluently, Leonor was able to communicate well with   them.

On this year’s Philippine-German Month, the German Embassy has asked Leonor to give a solo recital on Feb. 24, Friday, 6 p.m. at the Paco Park in the program called “Paco Park Presents.”  The public is invited.

Merk Anthony Esquillo will turn 23 in June, although he has been on dialysis a year ago two times a week. It is truly a miracle that he is still alive, although it was hard to raise money to pay for the treatment.

The readers of this column have been most kind in sending financial help through Merk’s father’s bank account the past year.

Fr. Greg Esquillo, the boy’s uncle and chaplain of the National Mental Hospital, does his best to help, too.

For the past 60 years, the Sisters of St. Francis of Perpetual Adoration have been doing ministry in Baybay, Leyte.

Founded by Venerable Mother Therezia Bonsel in Olpe, Germany, the order is in both active and contemplative ministry. For 24 hours a day, nuns make shifts praying before the Blessed Sacrament, while the rest handle education, healthcare and spiritual ministries.

The miraculous intercession of Mother Therezia, especially healing, is becoming well-known in Western Visayas and even in Luzon, thanks to the information campaign of Edgar Lozano, OIC in the Regional Trial Court in Macabebe, Pampanga. For prayer estampitas, text Sister Judith Lorica, OSF, vocation director, at 0919-4086416 and give your name and address.

Is God calling you?

Dear college students and professionals: Is God calling you to something more?  Go and spend three days with the OSF Sisters. Participate in their day of prayer, work, class and recreation. Open your heart to see if God is calling you to live out your life of holiness as a Franciscan Sister.

Single women between the ages of 18-35 are welcome.  Write to the Vocation Directress at St. Martin de Porres Novitiate, Baybay City, Leyte. E-mail [email protected] or call 053-3353888 or  visit www.ssfpa.org