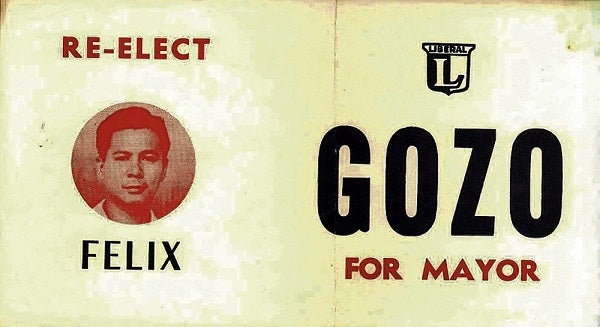 I was once a political animal. In the 1950s, my uncle, Tio Felix Gozo, was recruited to run for mayor by the Liberal Party leaders in Majayjay, Laguna. I became Tio Felix’s instant and rabid supporter. As a young man, Tio Felix displayed excellent leadership qualities. He headed many youth and civic activities. I idolized him.

Hometown politics is a highly personal affair. At stake is the reputation not only of our family, but the whole clan and all of our total barrio and purok kinship.

In Majayjay, party loyalists and followers felt secure if their candidate is nakaupo sa puesto (in office). Conversely, if your candidate was wala sa puesto (out of office), his followers were equally insecure. Regaining the puesto became an obsessive goal for the Liberal Party.

Nominated, Tio Felix immediately plunged into his mayoral campaign. He was in his early 30s—young, idealistic and physically fit.

We campaigned after work hours and deep into the night, person to person, family by family, house to house, barrio to barrio. The leaders in the districts of Majayjay gave Tio Felix the leads on who to approach and talk to in order to win votes.

Tio Felix, the first-time politician, lost the election by 250 votes, but I knew he enjoyed the whole process. He enjoyed interacting with all kinds of people.

Sometime in 1959, Tio Felix ran again. This time he had more followers and he applied the lessons he had learned from the last elections. He used his leaders for better information gathering.

During election time, a vote can be won or lost on last-minute maneuverings, such as vote buying or voter abducting. Tio Felix’s ward leaders covered all bases. They hired about a dozen jeeps to fetch voters to and from the polling places.

Feeding voters before and after the election, and the teachers and watchers during the count, was a monumental task. Cavans of rice were cooked in the silong (basement) of our house. Sacks of potatoes, noodles and sayote were cooked and four hogs slaughtered for food.

Tio Felix won, and there was much rejoicing in our camp. The Liberal Party and Tio Felix’s followers were happy to be back in power.

But being a town mayor, as Tio Felix and his wife, Tia Luz, learned later on, was a multifaceted job that intruded on both their private and public lives. As mayor, Tio Felix learned later on that his authority, in the eyes of his constituents, extended beyond the administrative work at the municipio and the management of projects of the consejo municipal. His authority extended also to the personal problems of the townsfolk.

Our house was always full of people. In the mornings, the callers came to borrow money for food, medicine or funerals. In the evenings, the more serious matters like lovers’ elopement had to be settled, with Tio Felix acting as the go-between. Favor seekers never ran out of purpose, from fixing a bridge in the barrio to providing drinking water to a community. Almost always, people had to be fed when they were in the house. Tia Luz’s kitchen was always ready with potfuls of rice, pancit, or sautéed sayote to feed callers, even at ungodly hours.

Tio Felix’s inaanak sa kasal ran into the hundreds. Almost every week, he had to stand sponsor at a baptism or a wedding in some town or barrio. This activity multiplied his network of voters because of increasing relationships with families of brides and grooms. The huge expenses drained his meager salary.

Still, Tio Felix loved the job. We never heard him complain. He’d wake up even at midnight to receive a farmer who would report that his carabao had been stolen. He’d spend nights talking to families to solve problems about division of inheritance. People came to him for jobs, for money, for medicines, or for coffins for their dead. They came to him to ask for funds, bridges and basketball courts in their barrios.

Even on Sundays, Tio Felix would go to Santa Cruz, the town capital, to ask Governor San Luis for funds for an irrigation project. Tio Felix was a 24-hour public servant.

Tio Felix was due for reelection in 1965. His record was exemplary. His chances of winning were great. But he had financial problems. He needed several thousands to spend for his campaign, but he didn’t have the funds. Tio Felix’s widowed mother and my lola had and sell the coconut farm in Kabilang Ilog to add to the party’s campaign budget.

As a third-term reelectionist, Tio Felix had acquired and developed the instinct to win. He became very good in the art of persuasive oratory. His leaders were loyal and strategically placed all over towns and barrios. And the support system of transporting and feeding voters was properly funded to ensure votes.

Tio Felix won again in 1965. But during his second term, the 24-hour job took its toll on his health. He lost weight and showed signs of aging. He became thin and sickly. He died of a heart attack in the arms of Tia Luz, the woman who loved him through thick and thin. He was 55 years old.

The whole town came to the funeral of Tio Felix. When his coffin was lowered into the grave, taps were played. Then the Majayjay Police Force fired their guns in the air as a way of saying farewell. The folded Philippine flag that covered the coffin was handed to a teary-eyed Tia Luz.

My uncle, Mayor Felix Gozo, died poor. He served the people of Majayjay unselfishly. Day and night, rain or shine. When he died, the biggest thing he left his family was a virtue called honesty. Honesty in public service. And a folded flag of the Philippines.