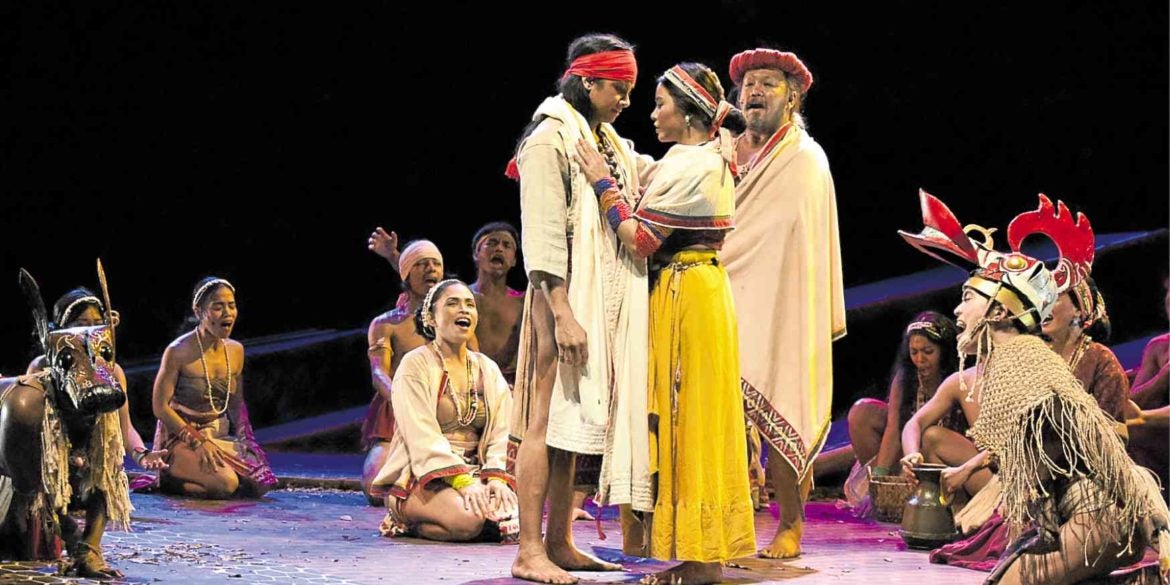 But it took a laborious while to get there

In its best moments, the production has a hypnotic, phantasmagorical feel to it, summoning through the power of words and music a lost world that is unmistakably Filipino.

Unfortunately, it is burdened by Eljay Castro Deldoc’s dissonant narrative rendering. Splitting the musical into two acts, Deldoc somehow has also written two entirely different shows: The first half, mesmerizing but also wearying to a degree, is clearly more in tune with the spirit of an epic; the second half is a mind-boggling rom-com with shades of Disney’s “Aladdin.”

Where character and plot development matter most— and where tragedy presents itself as an opportunity to be mined, especially in the first act—Deldoc tends to pull back. As such, the main points of conflict come across as cop-outs.

What “Lam-ang” ends up painting is a portrait of the hero as soft boy, reflected in the fact that JC Santos’ portrayal of the titular character is more satisfying as miniature matinee idol than as boy prince-turned-arrogant anointed leader.

Direction by Fitz Bitana and Marco Viaña feels subservient to the structurally faulty writing, but it still manages to construct some visually arresting tableaus and even sequences of genuine tension.

It is admirable how this production wisely plays to its strengths. The direction, alongside JM Cabling’s movement design and Meliton Roxas Jr.’s lighting design, works best in static moments, successfully evoking, oftentimes through simple sleights of hand, images of a close-knit community under siege from unseen forces. The ensemble here is visibly small, but an illusion of volume is achieved where it is needed, the sprawling set by Viaña put to effective use.

It is in moments of chaos when the cohesive illusion collapses, all three aforementioned elements still in need of military pruning. To put it plainly, you suddenly realize you don’t know where to look, or even who is speaking or singing.

Except when Tex Ordoñez-de Leon is onstage, in which case all eyes and ears are on her. As the narrator Baglan, she hews closest to the ethereal, otherworldly quality of lore, while being the most forceful and transfixing presence in this show.

Anna Luna as Lam-ang’s love interest Kannoyan also achieves that delicate balance of grace and commanding tangibility, while Paw Castillo as the warrior Sumarang elevates an atrociously underwritten role to a fiery embodiment of wrath and betrayal.

The overall picture is, in the end, a welcome and necessary return of Filipino musical theater to the realm of local legend.

More than the score, which at times feels dispensable, it is TJ Ramos’ sound design that helps make that return possible, the soundscape he has crafted both advancing and expanding the visual narrative.

In fact, taken together, the final two scenes of “Lam-ang” are already pitch-perfect in their evocation of loss, yearning and infinite possibility. It’s a pity it takes this musical a long and laborious while to get there.