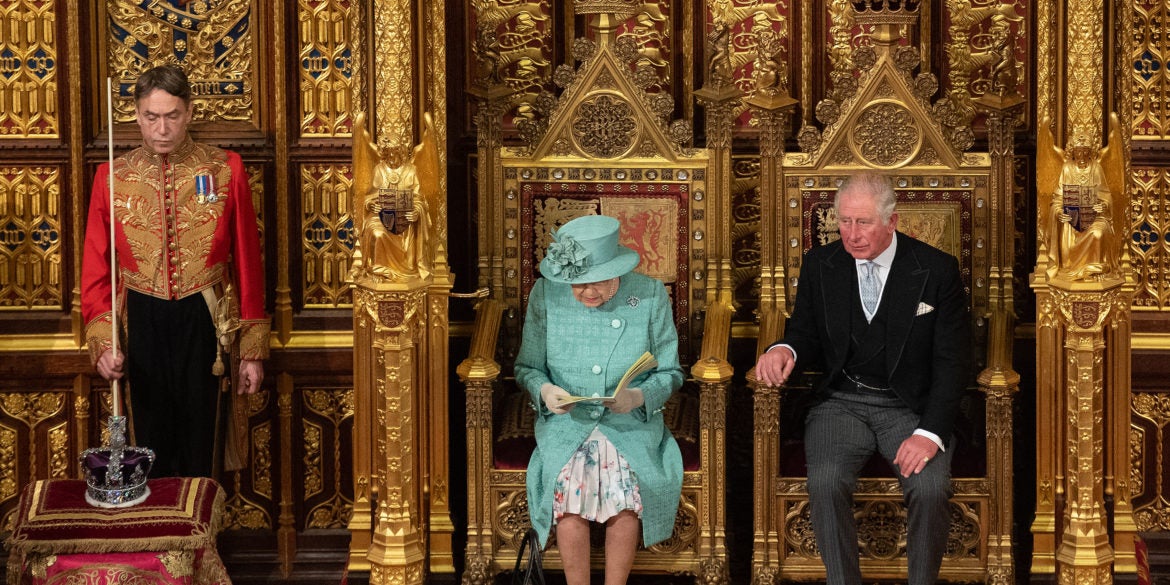 Britain's Prince Charles, Prince of Wales (R) listens as Britain's Queen Elizabeth II (C) reads the Queen's Speech on the The Sovereign's Throne in the House of Lords chamber, during the State Opening of Parliament in the Houses of Parliament in London on December 19, 2019. - The State Opening of Parliament is where Queen Elizabeth II performs her ceremonial duty of informing parliament about the government's agenda for the coming year in a Queen's Speech. (Photo by Leon Neal / POOL / AFP)

After a torrid 2019 in which the queen’s son Prince Andrew was implicated in an underage sex abuse scandal, many in Britain are again asking if the monarchy has gotten too big — and rich — for its own good.

The family’s year to forget may encourage Prince Charles, set to eventually take over from his mother Queen Elizabeth II, 93, in his purported belief that the centuries-old institution needs reform, according to royal experts.

“He wants to slim it down to a hard core of senior family members who work full-time,” said author Penny Junor, who has written several books on the royals including “The Firm” — the nickname sometimes given to the family.

“Andrew shooting himself in the foot has certainly made that an easier task,” she told AFP.

The 59-year-old prince, dubbed the queen’s “favourite son” by the UK press, has been dogged by allegations that he had sex with one of American convicted paedophile Jeffrey Epstein’s victims.

Andrew, who strenuously denies the accusations, gave a calamitous BBC interview last month in which he unsuccessfully tried to distance himself from the late US financier.

The furious media backlash saw him subsequently promise to “step back from public duties.”

It was a grim year as well for Prince Harry and his wife Meghan Markle, the former US actress.

The family’s tribulations led The Guardian to proclaim the firm had “lost its grip,” with royal observers predicting change will inevitably result.

The size and cost of Britain’s royal family has long been contentious, with the latest controversies renewing calls for a “rationalised structure of Windsor plc,” as The Daily Telegraph wrote.

“Bloated royal families are fine when you run a quarter of the world…not so good when you are in charge of a diminished, austere Britain, grappling with recession in the early 21st century,” the newspaper added.

Jonny Dymond, who covers the royal family for the BBC, said how much to finance the family “has been a big deal for a long time.”

“It’s the attack point for republicans,” he told AFP.

Dymond noted Britain’s royals have been adept at periodically reinventing the brand, acting as a kind of “ministry of good feelings” for the nation to justify its expenses.

“And that’s the problem with what you have at the moment, which is you’re certainly not getting your money’s worth,” he said.

‘Cost to the taxpayer’

That is intended to pay for the family members’ functional roles as figureheads, as well as the salaries of employees and maintaining places like Buckingham Palace.

The monarch also benefits from a “privy purse” which stems from the revenues of half a billion pounds in assets grown by the Duchy of Lancaster estate since the Middle Ages.

The portfolio of lands, properties, and assets held in trust generated almost £20 million last year, which the queen partly shares across the family.

Buckingham Palace does not disclose how exactly these funds are distributed to family members like Andrew.

The British press reports that he has received an annual royal allowance of £250,000 which his mother would give him each year, in addition to a yearly military pension of around £25,000.

The Duke of York, known for his “jet set” lifestyle, lives free of charge, as does his ex-wife Sarah Ferguson, in a royal residence.

He reportedly sold a property in Sunninghill, southwest London, which the queen had donated to him, for around £15 million in 2007, and owns a luxurious chalet in Switzerland.

“One of the common complaints about the monarchy is the cost to the taxpayer,” said Junor.

“There is a perception that many members of the family are free-loaders who don’t do much work.”

Cover image: Britain’s Prince Charles, Prince of Wales (R) listens as Britain’s Queen Elizabeth II (C) reads the Queen’s Speech on the The Sovereign’s Throne in the House of Lords chamber, during the State Opening of Parliament in the Houses of Parliament in London on December 19, 2019.  (Photo by Leon Neal / POOL / AFP)