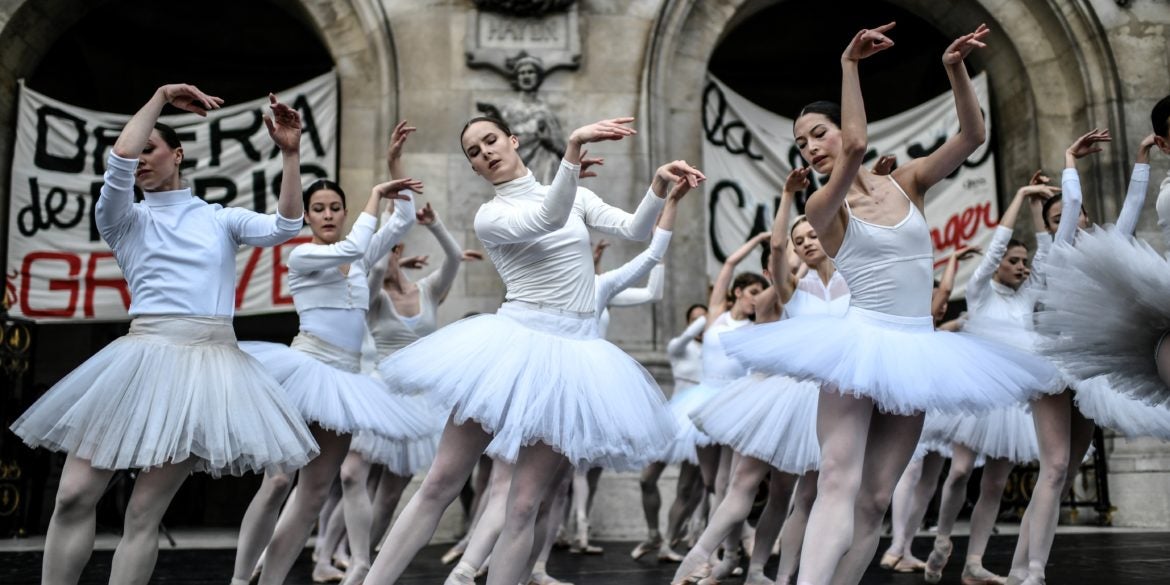 Paris Opera dancers perform in front of the Palais Garnier against the French government's plan to overhaul the country's retirement system, in Paris, on December 24, 2019. (Photo by STEPHANE DE SAKUTIN / AFP)

Dancers in white tutus performed Swan Lake on the steps of a Paris opera house on Tuesday in a show of support for the French strike against the government’s pension reforms.

Under a grey sky on Christmas Eve, around 40 dancers twirled on point in Act 4 of Tchaikovsky’s classic ballet against a backdrop of huge banners saying  “Paris Opera on strike” and “Culture is in danger.”

The dancers, on strike alongside public sector workers, oppose the government’s plan to do away with more than 40 separate pension schemes and replace them with a single points-based system.

The special retirement plan for the Paris Opera, which allows dancers to bow out at age 42, was introduced in 1698 by king Louis XIV — making it among the oldest in France.

“Even though we are on strike, we wanted to offer on December 24 a moment of grace,” said Alexandre Carniato, a dancer and spokesman for the strikers.

“Despite the cold weather, the girls wanted to rise to the challenge and the musicians to accompany them.”

The nearly three-week-old strike has paralysed public transport in France and forced the Paris Opera to cancel many performances, including Tuesday’s programme.

“Everyone at the Opera is affected,” dancer Eloise Jocqueviel, 23, told AFP. “It’s our art which has been put in danger.”

The performance of Swan Lake outside Palais Garnier demonstrated “15 years of sacrifice and daily work”, said Carniato, 41, who started at the age of eight, practising five hours a day.

“If you want to continue to see beautiful dancers on stage, we can’t continue to age 64, it’s not possible,” he said, referring to the proposed new age for a full pension.

“By 17-18 years old many of us have chronic injuries, tendinitis, fractures, knee problems,” added Jocqueviel.

Cover image: Paris Opera dancers perform in front of the Palais Garnier against the French government’s plan to overhaul the country’s retirement system, in Paris, on December 24, 2019. (Photo by Stephane de Sakutin / AFP)