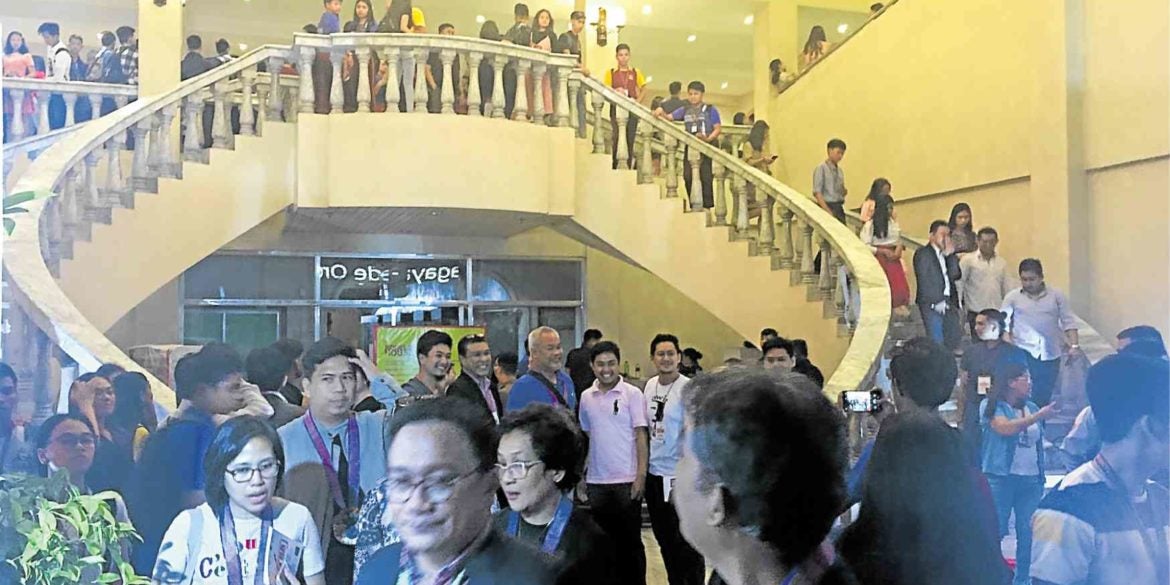 Every year, for the last 15 years, the Cultural Center of the Philippines (CCP) has devoted two to three weeks of its calendar to the Virgin Labfest (VLF), a festival of “untried, untested, unstaged” plays that CCP vice president Chris Millado said began as an effort “to address the fact that fewer and fewer writers are doing one-act plays.”

The effort has come a long way. Since 2005, VLF has premiered over 150 titles. Some have become full-length films, like Juan Miguel Severo’s “Hintayan ng Langit.” Others have earned recognition in such a prestigious body as the Palanca Awards, like Guelan Luarca’s “Mga Kuneho” and “Bait,” and Ma. Cecilia dela Rosa’s “Ang Mga Bisita ni Jean.”

On gala night, the university’s 700-seat Rodelsa Hall was packed. Cameramen and videographers roamed the lobby, where red carpets had been rolled out to welcome arriving audiences, a number of whom were literally dressed to the nines—all of it quite nothing like the low-key, casual affair that has been the norm at the CCP.

All of it, as well, was just a dream five years ago, when EVLF festival director Hobart Savior first raised the idea of bringing the festival to Mindanao, in a conversation with playwright Rody Vera, longtime head of VLF coproducer The Writer’s Bloc.

The realization of that dream is only affirmation that “Mindanao theater is Philippine theater,” as Savior declared to the gala night audience—affirmation that is, in fact, crucial to a country where the theater scene (and its coverage by leading print and online publications) remains concentrated in the capital city.

The differences brought forth by the breaching of geographical and cultural barriers were immediately apparent. For instance, Dominique La Victoria’s “Ang Bata sa Drum,” performed as a one-off gala night special, was surprisingly both more intimate and powerful in its new, purely Bisaya form (the translation from its original Tagalog-Cebuano mix care of Savior himself).

Regional sensibilities, too, surfaced with regional playwrights—writers “who know their land and people,” as Savior put it, dramatizing issues that resonate loudest in the Southern part of the country.

Darren Bendanillo’s “Banga” and Norman Isla’s “Daang Papunta, Daang Pabalik” both dealt with the specter of the siege of Marawi.

Or consider, for example, the staged reading of Abigail James’ “Birhen,” how it merged the issue of folk medicine (its protagonist is an albularya, a traditional healer) into the narrative of messy romantic entanglements (a love triangle figures in the plot!) in a way that, to this author’s mind, would lose its potency, should its Cebuano script be subjected to translation.

Of the 12 plays, in fact, only one was written in pure English, and a couple purely or partly in Tagalog. The rest were in languages spoken across Mindanao, most prominently Cebuano and Hiligaynon.

The nine fully staged plays were divided into three sets of three plays each, each set playing a matinee and an evening performance, the festival’s four-night run a collaboration among nine Mindanaoan playwrights, 10 directors, 50 actors and 45 production staff.

The rawness of the plays and the productions can, of course, be easily attributed to necessary birthing pains. As VLF production manager Nikki Garde-Torres later wrote on Facebook: “Of course, there is much to improve. There always is. But the strength of having the courage to stage ‘untried, untested and unstaged’ works lies also in the courage to face constant change—in systems [and] in styles of expression.”

If anything, EVLF only highlighted the need to nurture not just playwrights, but also directors, actors and designers—and perhaps, even theater arts programs themselves, be they in the university or community settings.

There is much to improve, indeed. But as demonstrated by the first, and hopefully not the last EVLF, there is always a path to achieving results.