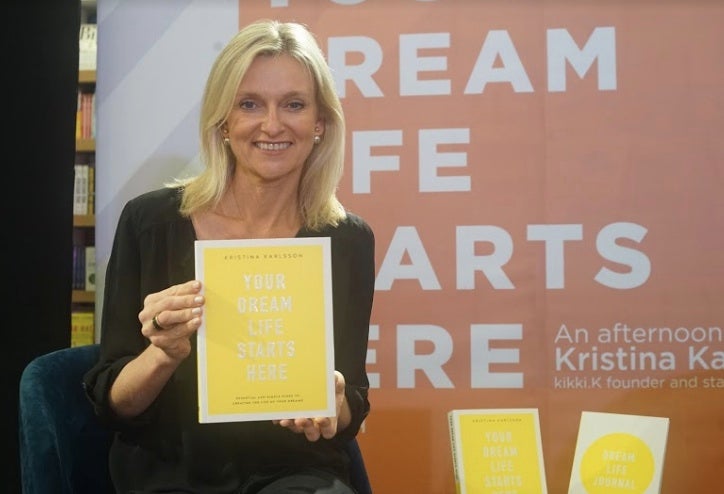 Your dream life starts with pen and paper–Kristina Karlsson

“I want to inspire people to dream. I have a big dream to inspire 101 million people to write down three dreams, take their dreams seriously and make them happen.”

With nary a blink of an eye nor a ghost of doubt, Kristina Karlsson said this in an interview with Inquirer Super. Instead she was all smiles, her face beaming with excitement.

The founder and creative director of Swedish design and stationery brand kikki.K wasn’t kidding. Her book “Your Dream Life Starts Here” is how she has chosen to inspire all these people. The self-published endeavor became available on bookshelves only last year and so far, Karlsson has sold 70,000 copies.The book is filled with quotes from famous personalities such as Richard Branson and Oprah Winfrey, as well as the inspiring success stories of these people, told from Karlsson’s point of view. There are also excerpts from children’s books such as “Oh the Places You’ll Go” by Dr. Seuss and “Alice Through the Looking Glass” by Lewis Caroll.

Every chapter includes a story as well as an exercise that, in Karlsson’s words, would encourage people to “reach into their hearts and do what they can to live their best life.”

Write them all down

Karlsson believes in the power of putting pen to paper. To say that it worked well for her is an understatement.

“Kikki.K started with me writing down my dreams years ago, and I have achieved them,” she said.

Among those dreams were to own her own business; to drive to work every day passionate and excited; earn at least $500 a week; and to engage in work that would keep her in touch with family and friends in Sweden. For a 22-year-old woman who was starting a new life in a new country—in Australia—these were quite challenging.

Nevertheless, what used to be dreams written down on paper became a reality.

“I have to pinch myself sometimes when I realize how my dreams have come true. I want to share what I’ve learned,” said Karlsson.

The exercises are the same tools Karlsson used to identify her dreams and set them in motion.

Taking down notes on a piece of paper may be easy, but writing down goals and fulfilling them are daunting, even to the most ambitious and motivated souls.

To start off, Karlsson suggests asking oneself this question:

Depending on the person, there could many different possible answers to these. Hundreds—or even thousands—of dreams that could be written down.

The dreams can either be big or small, according to Karlsson, because every human achievement begins as one’s dream.“It isn’t about aiming for a fairy tale or a perfect fantasy.” she said.

Because while she is living her dream life, she admits that it isn’t perfect. She, too, has her own ups and downs.

“Life doesn’t have to be perfect to be wonderful.” No obstacle is too big

Kristina believes that every person should be allowed to dream, regardless of that person’s status in life. Whether you’re a man or a woman, rich or poor, educated or otherwise, you should have dreams that you can work hard for and turn into reality.

During the interview, Karlsson shared the story of Tererai Trent. Trent was born into poverty in rural Zimbabwe and attended elementary school only briefly before she was sent to work in the fields. She belonged to an oppressive community, where any money that could be invested in education was spent on boys—girls were never a priority.

Trent was married off as a child bride at 11 years old in exchange for a cow, and by the time she was 18, she was already a mother of four. One of her babies died because she could not produce enough milk to feed all her children. Then, there was also the problem with Trent’s abusive husband.

Despite her less than ideal situation, Trent allowed herself to dream, albeit secretly. She convinced her brother to teach her to read and write. She wanted to attain a level of education that women in her village were not normally allowed to pursue but kept mum on this fearing people in her village would just mock her. Her luck changed when an American woman, Jo Luck, visited her village when she was 20 years old and asked her about her dreams.

It took Trent another 20 years to fulfill her dreams—which was to go to America to obtain an undergraduate diploma, a master’s degree and a doctorate—but not without taking on several jobs to support herself and her children, eating from a dumpster and enduring physical abuse from her husband. Her last dream involves improving the lives of children and women in her village in Zimbabwe.

Trent’s story is one of several included in “Your Dream Life Starts Here.”

“We are all special. We can all do extraordinary things. These people have done that and that’s why they’re where they are today, “ said Karlsson, referring to the personalities featured in her book.

“Tererai is proof of the power of dreaming and that the impossible is possible,” she added.

Kristina Karlsson is donating US$1 from the sale of every copy of “Your Dream Life Starts Here” to Tererai Trent International Foundation, which aims to provide universal access to quality education for children, regardless of their gender or socioeconomic backgrounds.