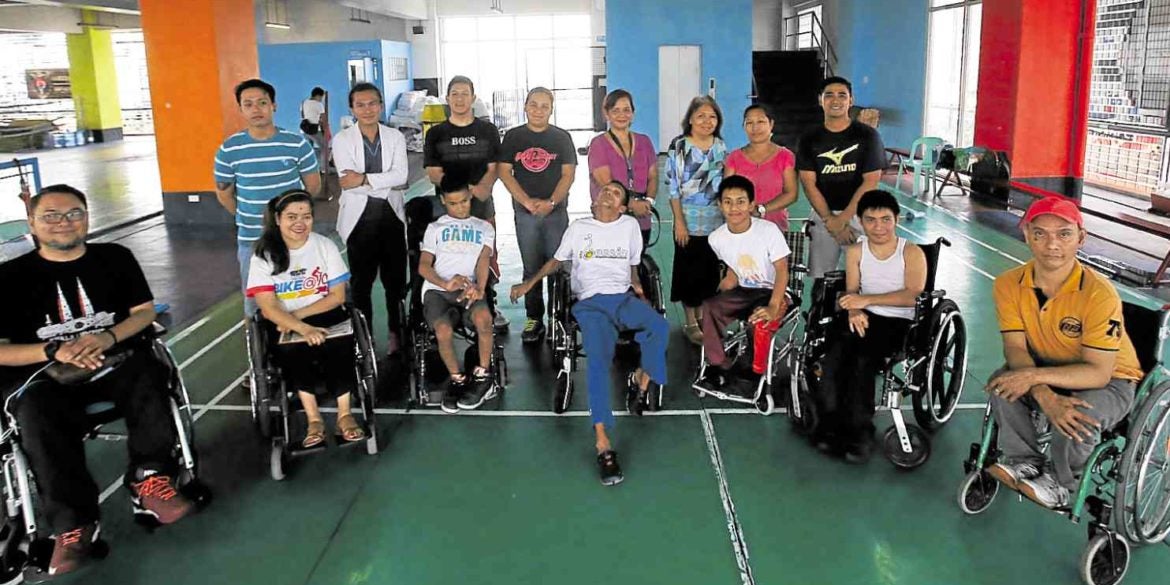 Joey de Leon, 36, was born with cerebral palsy, a brain disorder developed at an early age that affects muscular strength, movement and functioning of other body parts. Wheelchair-bound, unable to speak and use his fingers, he communicates through his mobile phone by tapping his toes on the keyboard.

Despite his handicap, he has become the local poster boy for boccia (pronounced “bosha”), a sport developed for wheelchair-bound players. He is aiming for his next international tournament.

In March, the Philippines will host the 10th Asean Para Games at the New Clark City Athletics Stadium in Tarlac. (At press time, the dates have not been finalized.) This biennial multisport event for athletes with disabilities includes swimming, athletics, target sports, aquatics and ball and racquet sports, and will introduce triathlon and cerebral palsy football.

A relatively new sport in the Philippines, boccia consists of two teams—one side has six red balls and the other six blue balls—which play against each other in a long court. The objective is to get the team’s balls nearest to the jack—the white target ball—than the opponent’s. Depending on their abilities, the players keep hurling their balls with their hands, feet or a device on their heads in severe cases until they use up their six balls and get their balls as close to the jack as possible.

“It’s a precision game,” said Marangal Gonzales, head coach of the Philippine boccia team. “The players must be accurate when then they propel the ball toward the jack. Yet, they have to confront their disabilities which prevent them from being consistent in their throws.”

The game is also challenging because the cerebral palsy patients are categorized with different stages of mobility and motor skills.

Boccia has four types of player classifications, depending on their limitations and the assessment of doctors. The weaker players may require an assistant during the game and a ramp to help the player drive the ball in any direction he chooses.

The sport develops the players’ concentration, control and coordination which, consequently, enhances their motor skills.

De Leon, the team captain, is classified as a BC1 player—one who has limited movement in the legs, arms and torso. Hence, he plays boccia with his feet.

Despite his frailty, De Leon has been admired for projecting the ball long distances and knocking down the opponents’ ball to replace it with his. He is unique because he is unlike other cerebral palsy foot players who kick the ball—he grips the ball with his feet and thrusts it toward the jack ball.

De Leon’s mother, Luisa, said her son has been playing boccia for only over five years. He went to a tryout organized by the Cerebral Palsy Association of the Philippines. De Leon has since been joining boccia tournaments organized during National Cerebral Palsy Awareness and Protection Week, held every Sept. 16-22.

De Leon’s first international competition was the Asean Para Games 2017 in Malaysia. He beat the Thai athlete who was ranked no. 14 in the world in the BC1 category.

Luisa noted how boccia has improved her son’s moods. Instead of going to school, he was tutored by his mother. He would get bored at home and threw tantrums. With boccia, De Leon discovered he had a gift, and his engagement with the sport has boosted his self-esteem.

Another boccia athlete, Louis Matthew German Lontiong, 21, has also been playing for five years. At 16, he joined an invitational tournament where the coach saw him accurately thrusting the balls toward the jack with his right hand. He represented the Philippines in the Asian Youth Para Games in December 2017 in Dubai.

His mother, Edna Lontiong, observed that boccia has also given Louis more confidence, optimism and discipline with time.

“He comes straight from school to practice at the Marikina Sports Center (MSC). When there are no practices, he and his mom go to the barangay badminton court to practice on his own,” observed coach Gonzales. “The game motivates the cerebral palsy players and drives them to excel.”

Boccia was introduced to the Philippines in 2001 by Gonzales’ late father, Octavio, then head coach of the Philippine Association for the Differently Abled (Philspada), the national paralympic committee under the Philippine Sports Commission (PSC).

The older Gonzales was tasked to look for a new sport abroad for the disabled. With the support of the Cerebral Palsy Association of the Philippines, a European coach went to Manila to teach boccia as a recreational sport for the cerebral palsy community.

Gonzales also traveled with his father around the Philippines—as far as Tawi-Tawi—to promote boccia. The Philippine boccia team joined its first foreign tournament at the Asean Para Games in 2008 in Thailand.

Gonzales said the Philippines is slowly catching up with the rest of the Asian region in boccia.

In need of funding

As in other sports, paralympics sports are also in need of funding. The boccia players practice for three hours thrice a week at MSC.

Four months before the annual Philippine National Para Games (PNPG), which is held in the summer, or an international tournament, the practices are held daily.

The boccia team gets its funding from the PSC and local government units. Gonzales said the players’ transportation allowance is costly.

“They have to take a cab or book Grab to and from Marikina because they are in wheelchairs. That becomes more expensive, especially when practices are held daily,” said Gonzales.

Another challenge is that if MSC’s elevators are malfunctioning, the mothers—with an assistant—carry their sons to the court on the seventh floor where the practices are held. The court has the dense and resilient flooring ideal for indoor games.

Still, Gonzales noted that the boccia community is growing. At the recent PNPG, 32 players of different classifications joined the boccia tournament. “Boccia has given these players hope. Many aspire to be part of the national team,” said Gonzales.

Meanwhile, Natalie Tjahja, a Malaysian, has produced and directed “Movie Boccia,” a documentary on 10 boccia athletes from the Asean region.

De Leon was featured for his skills in throwing the ball wihjjjth his feet, as if they were his hands. At present, she is still looking for a venue for the Philippine premiere.

“The movie shows the strong will of these cerebral palsy athletes. We need to create more awareness of this sport. Someone may just be struggling in the wheelchair, but he throws the ball near the target and makes his country proud,” said Tjahja.