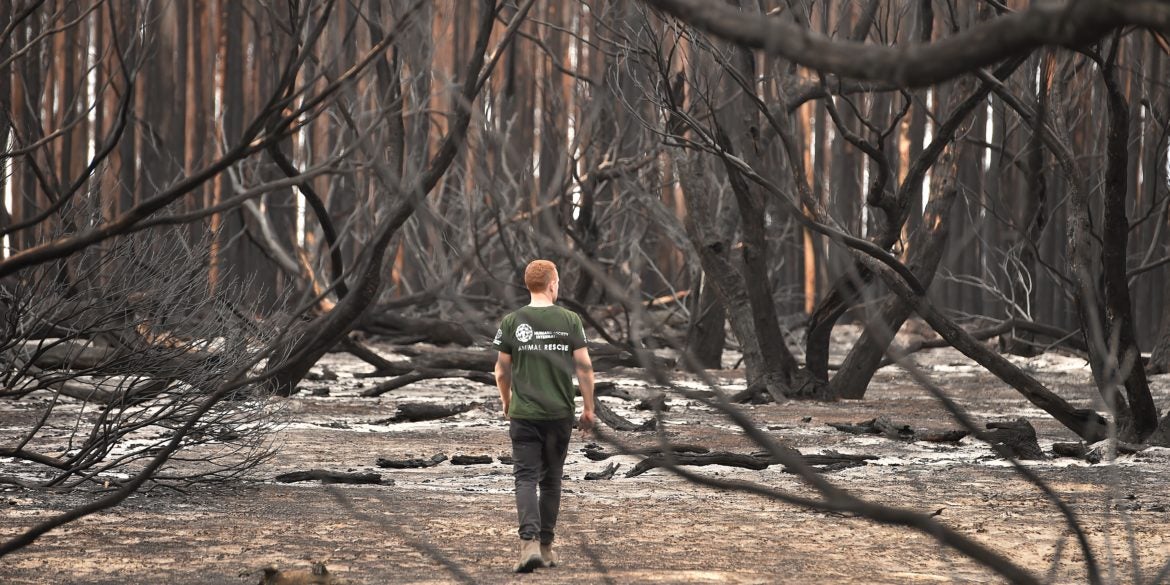 Humane Society International specialist Evan Quartermain (C) looks for injured wildlife in a burnt out forest on Kangaroo Island on January 15, 2020. - On an island famed as Australia's "Galapagos" for its unique and abundant wildlife, rescuers are racing to save rare animals in a bushfire-ravaged landscape. The charred forest floor on Kangaroo Island is littered with corpses of animals incinerated by the blazes that swept through two weeks ago. (Photo by PETER PARKS / AFP) / TO GO WITH: Australia fire environment climate animal, FOCUS by Holly ROBERTSON

On an island famed as Australia’s “Galapagos” for its unique and abundant wildlife, rescuers are racing to save rare animals in a bushfire-ravaged landscape.

The charred forest floor on Kangaroo Island is littered with corpses of animals incinerated by the blazes that swept through two weeks ago.

Unprecedented fires across swathes of southern and eastern Australia over the past five months have killed an estimated billion animals.

With forests and coastal areas roughly the size of Portugal burnt through, environmentalists fear the fires will drive some species to extinction.

On Kangaroo Island — home to unique koalas, the critically endangered mouse-like dunnart and many threatened plants — concerns are particularly acute.

Amid the stench of rotting animal flesh, rescuers are combing the island’s Flinders Chase National Park looking for injured, lost and starving animals.

“When we found this area we never thought anything could have survived, but we have pulled survivors out of there every day,” Kelly Donithan, a Humane Society International crisis response specialist, told AFP while on patrol this week.

But with huge parts of the animals’ habitats destroyed, the chances of many surviving are fading by the day.

“Time is of the essence,” Donithan said.

“Every day that goes by, the animals get weaker and weaker and their organs are becoming more susceptible to irreparable damage.”

Kangaroo Island, a short ferry ride from Adelaide in South Australia, was before the fires a popular tourist destination because of its pristine landscape and wildlife.

One of its most famous animals is the glossy black cockatoo, a bird with a bright tail that is extinct on the mainland.

But as rescuers walked through the death zones of the national park on Wednesday, no birds could be heard.

Another top concern is the Kangaroo Island dunnart, a small grey marsupial which was already facing extinction before the blazes.

“We think there were about 500 of them left (before the fires),” Zoos South Australia chief executive Elaine Bensted told national broadcaster ABC.

She said most of the dunnarts were in the western part of the island, which has been most severely impacted by the fires, many still burning.

The rescuers say it is difficult to find small species that have survived so their focus has mainly been on larger animals.

These notably include the local koala population, the only one in Australia entirely free of chlamydia — a sexually transmitted infection also found in humans that is fatal to the marsupials.

This has made them a key “insurance population” for the future of the species.

They are even more crucial now that huge numbers of koalas are feared to have died in the bushfires on the Australian mainland.

Australian Environment Minister Sussan Ley this week said koalas had taken an “extraordinary hit” and could be listed as endangered for the first time.

Rescued koalas are being taken to a makeshift sanctuary at Kangaroo Island’s Wildlife Park.

But some are so badly injured that they are having to be euthanised.

“Sometimes we’re out there for hours walking through catastrophic landscapes (with) hundreds and hundreds of bodies on the ground… and you get down — you can’t help it — it’s extremely traumatic,” he told AFP.

“But then you find a (koala) joey at the end of the day and we bring it in and we give it a chance and we’re filled with joy.”

Cover image: Humane Society International specialist Evan Quartermain (C) looks for injured wildlife in a burnt out forest on Kangaroo Island on January 15, 2020.  On an island famed as Australia’s “Galapagos” for its unique and abundant wildlife, rescuers are racing to save rare animals in a bushfire-ravaged landscape. The charred forest floor on Kangaroo Island is littered with corpses of animals incinerated by the blazes that swept through two weeks ago. (Photo by PETER PARKS / AFP)