Fit and fab at 50: Working it like Jen Aniston, JLo and Renée Zellweger | Inquirer Lifestyle 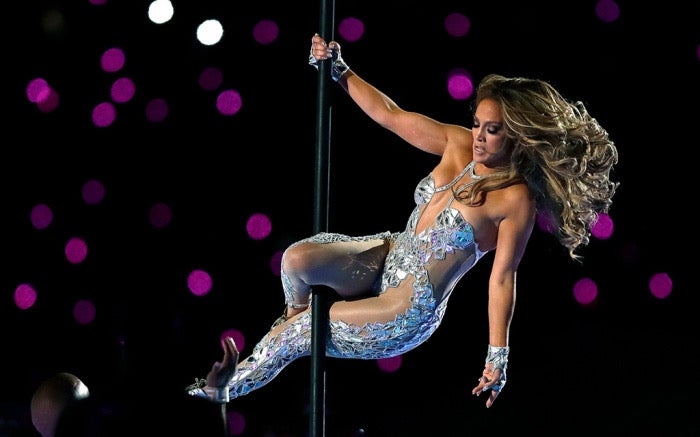 Jennifer Lopez, 50, performs during halftime of the NFL Super Bowl 54.

Fit and fab at 50: Working it like Jen Aniston, JLo and Renée Zellweger

Jennifer AWniston just turned 51, and she doesn’t look a day older than Rachel Green, the character she played in “Friends.” Could Jen be any fitter?

Women’s Health reported that the star works hard to stay in shape—like, nearly every single day, even before 3 a.m. if call time is early, from 45 minutes to 1½ hours each time. She takes time to break a sweat.

Her trainer, Leyon Azubuike, coowner of Gloveworx, in an interview with Women’s Health, said: “We box, we jump rope, we do strength training, we do a lot of work with resistance bands—we’re big on resistance bands…We rotate these things, so it’s always hard, she’s consistently being challenged. I’m a big fan of switching things up, so the body reacts in a positive way and changes.”

The actress also told People magazine, “You have to shake it up. You know, muscle confusion.”

She’s a yoga devotee—since 2005—but enjoys mixing it up with spin class. InStyle reported that Aniston’s typical yoga workout starts with 20-30 minutes of spinning. Once her heart rate is up, she does 40-45 minutes of yoga.

Recently, though, she’s been in love with boxing. “It’s the longest workout I’ve actually stayed with consistently other than yoga,” Aniston told InStyle.

“There’s something about the mental aspect of boxing—the drills, your brain has to work, you’re not just sitting on a bike,” she added. “Boxing is a great way to get aggression out. You get a mental release of all this crap you’re taking into your ears and eyes every day, and have little fantasy moments imagining who you’re punching.”

Azubuike, in the same Women’s Health interview, said the “Friends” star could easily hold a two- or three-minute plank. The hardest part of training Aniston, he said, is constantly finding ways to challenge her.

She may be a hardcore fitness buff, but Aniston also opened up to Elle magazine about the love and acceptance of her body as it ages. “When we’re kids, we’re constantly working out for smaller arms, a leaner butt, a flat tummy. Don’t beat it up so hard. Let it be. It can be a little soft.”

No actor has been under such brutal media scrutiny recently as Renée Zellweger, 50.

Zellweger rose to popularity after 1996’s “Jerry Maguire.” In 2001, at the height of her fame, she gained weight for “Bridget Jones’s Diary,” reportedly gorging on fatty carbs like pizza, donuts, Snickers bars, and beer. (“I was repulsed at the thought of those obligatory Snickers bars,” she told CNN.) She went from a size two to a size 14. But by the 2001 Oscars, she had dropped the weight, spurring rumors about her health.

Zellweger gained weight again for “Bridget Jones: The Edge of Reason,” in 2016. This time, though, she consulted a doctor who made her safely put on weight until she reached 140 pounds. She stopped exercising just before filming began, and consumed a “high-calorie diet with a lot of flaxseed-oil salad dressings and ‘delicious’ protein weight-gain shakes.”

“I’m not an actress who made her way based on physicality,” she told CNN. “I think quite the opposite. In fact, I sort of disappear a little bit, with respect to my looks. I’m lucky. I’m not a standout, knockout kind of girl that, you know, it’s all about my great hair or something.”

She took a break from Hollywood in 2010 and emerged from her long show biz hiatus straight onto the red carpet at Elle’s Women in Hollywood event in 2014. When her photos appeared in numerous publications, she was once again trolled online with rumors that she’d undergone plastic surgery.

“Nothing like international humiliation to set your perspective right,” she said of the plastic surgery rumors. “It clarifies what’s important to you. And it shakes off any sort of clingy superficiality,” she told Vulture.

Zellweger told Glamour magazine that running is her workout of choice. “It’s my outlet, the one thing I do during the day that’s mine and mine alone,” she said. “I don’t want to work with a trainer, and I don’t want to go with friends to the gym. It’s my solitude, and I need it.”

Jennifer Lopez is incredibly ripped at 50, as seen in her recent, widely seen Super Bowl half-time performance, although that shouldn’t come as a surprise. She dances for a living. Have you tried dancing recently? It may have been fun in high school, but at a certain age, dance becomes cardio exercise—still fun, but with a whole new mission.

The “Hustler” star reportedly maintains a clean diet and a strict workout regimen. Aside from upping her strength workouts to learn how to pole dance for her recent movie, a quick follow on her Instagram account will show you snippets of her exercise routines, including intense leg workouts.

“I am 100 percent convinced that working out is part of what makes me so happy,” she said to Hello! magazine. “Dance has always been a huge part of my life, and taking the time to move my body and do something that’s so good for me is key to my happiness. And I really believe that when you take care of yourself and work to stay healthy, you’re better able to take care of those you love. So working out is definitely a priority for me.”

She starts her day by exercising. “I don’t like doing it later. It’s harder to get there when I have my day going already,” she told Hollywood Life.

Her trainer, David Kirsch, told Insider that the one move JLo incorporates into her workouts to sculpt her butt is a platypus walk: Start in a plié squat position. Put your hands behind your head and waddle forward. Hold the squat, then reverse, keeping your weight on your heels. Repeat 15 times. Kirsch said this is “the quickest, most effective workout for your butt.”JLo’s no. 1 rule, however, is to always keep hydrated. “Drinking plenty of water, especially before a workout, can help you push harder and get more out of your exercise routine… I try to keep my body hydrated and well-rested after every workout,” she said to Hello! “That way, I’m ready to hit it hard again the next day.”

She knows what to put and what not to put into her body. Her coffee is always decaf, for instance, as she steers clear of caffeine. “I haven’t had caffeine in years,” she told Hollywood Life.

“I have her eating very clean because she needs really good fuel for all the things that she’s doing,” her other trainer Tracy Anderson told People. “It’s all organic, and it’s all very well thought out, with a balance of very high-quality proteins and a lot of nutrient-dense food.” INQ