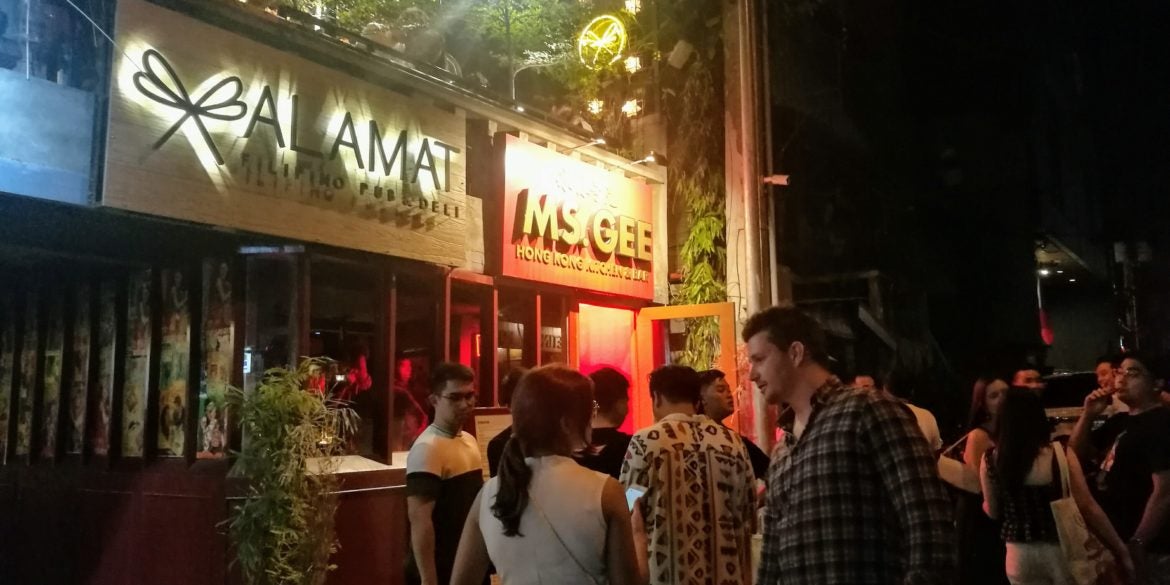 But a number of concerts have been postponed

It’s after midnight on a Friday and Makati’s Poblacion crowd spills out on Don Pedro Street fronting Alamat and Ms. Gee. Inside Ms. Gee, which describes itself as a Hong Kong kitchen and bar, where a DJ plays pulsating dance music, it’s difficult to walk from the door to the bar to order drinks without bumping or brushing against sweaty, swinging bodies. It’s not exactly a place one would consider safe from the COVID-19.

A few meters away, a similar scene unfolds in another bar, Kampai, formerly located in Tambai Alley and now newly reopened on Alfonso Street. Upstairs, groups of friends huddle, drink and talk, while others dance like they’re at Woodstock. I can imagine the lovely woman swaying her arms to the music telling me, “The hell with the virus, let’s have fun!”

But it didn’t look like this a few weeks ago, says Sunny Jhamtani, head of operations of Kampai, NoKal and Spirits Library. Back then, as news of thousands of Chinese dying from COVID-19 spread, the regular Poblacion night owls didn’t show up. The few who still went to Kampai wore surgical masks.

“I guess it’s a natural reaction, the fear of catching a mysterious virus that could cause death is overwhelming,” says Jhamtani.

At Nokal, the dancing crowd sings along to a remixed Ben E. King hit: “And darling, darling, stand by me … ”

Crossing over to Kalayaan Avenue, at H&J, a top tourist draw on Felipe Street and one of the first sports bars to open in Poblacion, the mixed crowd of Caucasians, African Americans and Asians mingles freely. Many are watching a football game while others play billiards.

“We were affected in the first few weeks when news of the virus broke out,” says Randy Musters, H&J manager. Only a few dared to hang out at H&J and all of them wore masks, only to take them off because they needed to drink, Musters added.

“But it’s slowly going back to normal.”

Indeed, business is gradually picking up again, say the wait staff at Panaginip on the second floor of Tambai Alley. If dance music is the trend in Poblacion, it sounds more inviting at Panaginip, where classic songs by The Pointer Sisters, Patrick Rushen, Evelyn “Champagne” King and Janet Jackson are heard one after the other. A Janet Jackson tune captures the mood of the crowd at 2 a.m.: “Escapade … we’ll have a good time … ”

However, forthcoming concerts have been postponed as health authorities advise promoters of big shows to consider the potential spread of COVID-19, especially in indoor venues.

Artists who have decided to indefinitely reschedule their gigs in Manila are Green Day, Avril Lavigne, Khalid, Jimmy Eat World, 98 Degrees, Hyukoh, plus the Wanderland Music and Arts Festival.

As for Alanis Morissette, who is set to perform on April 6 and 7 at the Mall of Asia Arena, it’s still a go, says Renen de Guia of Ovation Productions.