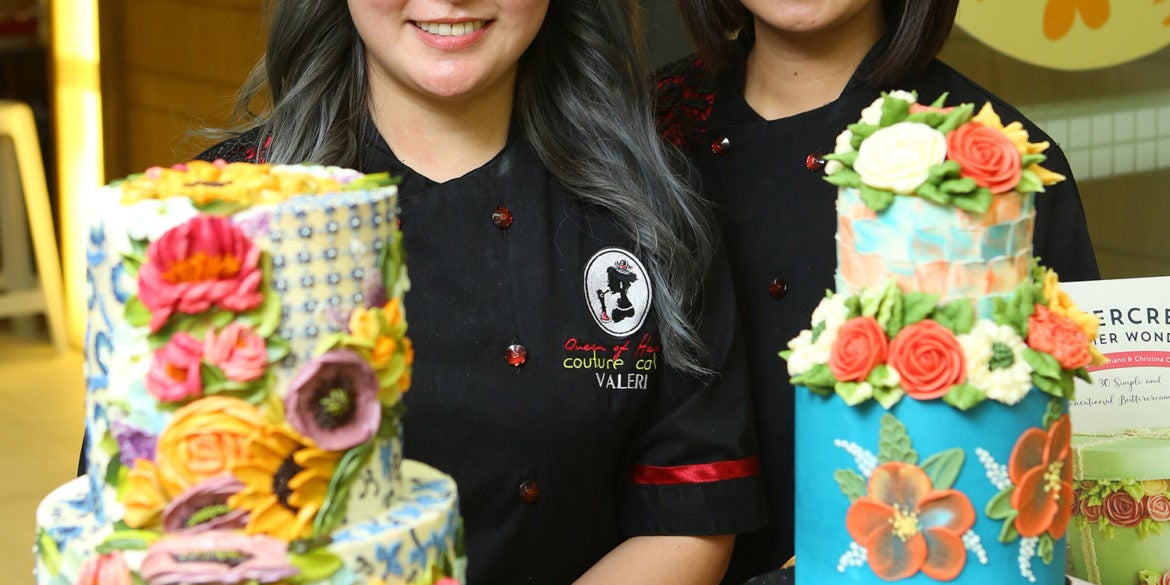 Christina Ong and Valeri Valeriano with cakes they decorated with buttercream

Christina Ong and Valeri Valeriano, known today as the queens of buttercream, are the owners of the London-based shop Queen of Hearts Couture Cakes. It’s a title and a shop they well deserve, considering their long, circuitous road to success.

Back in 2008, they were working odd jobs in the United Kingdom while waiting to be employed as health workers. “We would babysit, work as waitresses or as nursery school assistants,” Valeriano recalls. “We would even go with some ate (older Filipino women workers) when they would clean homes so we could see those big, nice houses.”

They finally got work, but by that time they had met two British families with whom they had become close. One Mother’s Day, the pair decided to give the mothers cupcakes. Though they had never baked before, they were able to make a sunflower cupcake with a found recipe and their trusty tabletop oven.

Impressed with the cupcake, one of the mothers suggested that they go into the baking business. Ong and Valeriano thought it was an idea worth exploring, so they enrolled in a course to learn more about making buttercream. They also watched tutorials online on how to make cupcake bouquets.

When they thought they were ready to go into business, they sent emails and photos of their cupcakes to 50 companies, hoping to get orders.

They went back to being health workers.

However, three months later, they got a call asking them to pitch in and sell cupcakes at an event. They dropped everything and said yes.

They baked 200 cupcakes in their tiny studio flat, using their 5-liter tabletop oven which could accommodate only six cupcakes at a time.

“We did not sleep for two days,” Ong recalls.

Wedding cake made of cupcakes

Their efforts paid off. All 200 cupcakes were sold during the event.

It was also then when they met their first customer who asked them to do a wedding cake made of cupcakes. Even better, the main organizer asked them to join all her forthcoming events. It was summer then, and Ong and Valeriano ended up going from one park to another, selling cupcakes.

In 2012, when they heard that there would be the first London cake show, they tried their luck and wrote the organizer. To their surprise, they received a reply the following day asking them to do a demonstration. The next thing they knew, they received a floor plan indicating where their booth would be.

Ong practiced the spiel for their show demonstration dozens of times, but when it came time to actually say it, she got tongue-tied and started to cry. Lucky for her, the audience was understanding and told her to just say one word. She did, and she hasn’t stopped talking about buttercream since.

The pair soon started teaching their craft. Invitations to join international shows also poured in. By 2014, they decided to give up their other work. They also no longer live in a shoe box.

Looking back, both say they were surprised they could actually be good at cake decorating. “Our parents were not impressed at first,” says Valeriano. “I’m not even good at drawing.”

Well, they’re certainly impressed now. The buttercream decorations that Ong and Valeriano make are intricate, very detailed and almost magnificent in their beauty. Aside from flowers, they also do other popular styles such as stained glass, palette knife painting, beadwork and lace.

At the Maya Kitchen last week, Ong and Valeriano taught a small group how to decorate cupcakes with buttercream. Teaching, they feel, is one way they can give back to their fellow Filipinos. Last November, they also organized Cake Fiesta Manila, an enormous cake show, with the support of the Maya Kitchen.

Here’s their recipe for buttercream.

(Ong and Valeriano usually use pure butter for the frosting, but because of the hot weather in Manila, they recommend substituting shortening for some of the butter.)4 c (500-600 g) icing sugar, also known as powdered sugar or confectioners’ sugar

1/2 c vegetable shortening (such as Crisco) at room temperature

Sift the icing sugar, then set aside.

In an electric mixer, beat the butter at high speed until it turns soft and pale (about 1-2 minutes). Add the shortening and beat for another 30 seconds to one minute.

Add the vanilla and water (or milk/double cream), then beat at medium speed for about 10-20 seconds, until the mixture is well incorporated.

You can use this to frost cakes and cupcakes.