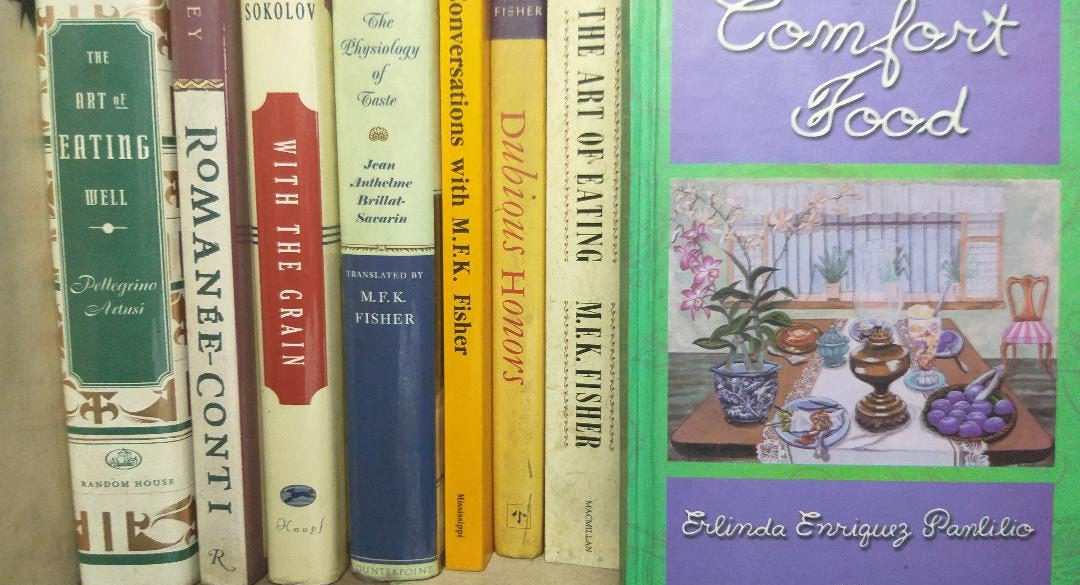 “Comfort Food” among my books

Catching up on ‘comfort food’ reading

Being quarantined is not new to me. After having caught an autoimmune disease, my usual trips to research and cover events were canceled. For weeks, the TV kept me company—news in the early morning, drama and comedy on Netflix at night.

The plus is catching up on my reading. As soon as my brain caught up with my physical healing, all the books around me asked to be opened.

For today’s enforced quarantine due to COVID-19, when you can’t eat out, open a book about food, and then maybe cook something that gives you comfort.

I remembered “Comfort Food,” a collection of essays by noted writers and edited by Erlinda Enriquez Panlilio (Anvil Publishing, 2003). I had previously read some of the pieces, like, for instance, how Simeon Dumdum Jr.’s “In the Blood” made me tear up.

Dumdum, a Cebuano, wrote about his mother’s chicken dinuguan and tinola which he wanted to taste again. “In the Blood” gave the recipe for the two soups, though not in the usual cookbook way, starting with the manok Bisaya, which is how native chicken is called in that part of the country.

But in his essay, he mainly wove a story about his father and mother, how they met during a rainy day, thus giving his father, a schoolteacher, the opportunity “to woo the stranded beauty whose home was across the river.” His mother called it sapang daku, the “big river.”

Anthony L. Tan, award-winning poet and essayist, wrote about the food he grew up with in Siasi, Sulu. The essay title, “Chicken in Shark-Infested Stew,” is what he called his mother’s “bienvenida” soup, served when he and his brothers came home from school.

It is chicken cooked with shark’s fins and minced pork with egg. It was during the time when shark’s fin was not taboo and the Chinese in their town could be depended on to “decoat” the fins, a process that removes the coating after several days, which explains why shark’s fin becomes expensive.

I can see in my mind’s eye my friend Datu Shariff Pendatun III taken aback by the inclusion of pork but, as I had explained to him, my early Sulu sources were Christian.

Lilia de Leon Cid, whose family lived in Jolo for years until they had to flee from the Battle of Jolo in 1974, described the same soup of shagul (shark) with chicken, ground pork, crab meat, shrimps and vegetables, “and made rich by several eggs beaten in (20 eggs per half kilo of shark’s fin).”

Panlilio, the editor, said the book was conceived while she and Felice Sta. Maria were working on a booklet, “Comforting Cuisine,” for the Manila Ladies Branch of the International Wine and Food Society. In both books, Panlilio wrote about the days when her parents were busy with the food business (Sulo Restaurant, D&E) and how she grew up with the househelp who cooked simple food for her like bangus (milkfish), fried crisp and sometimes burnt because the cook was too engrossed in the radio drama she followed.

My book menu is overflowing, and this one-month quarantine is a good break to read those I never had time for, being busy flitting around just to be in step with what is happening in the food world.

Once in a while, even if forced, you have to step back, and appreciate all the information and stories around you. INQLast week we announced the “Toques and Texts” event on April 25. But because of COVID-19, it has been canceled.