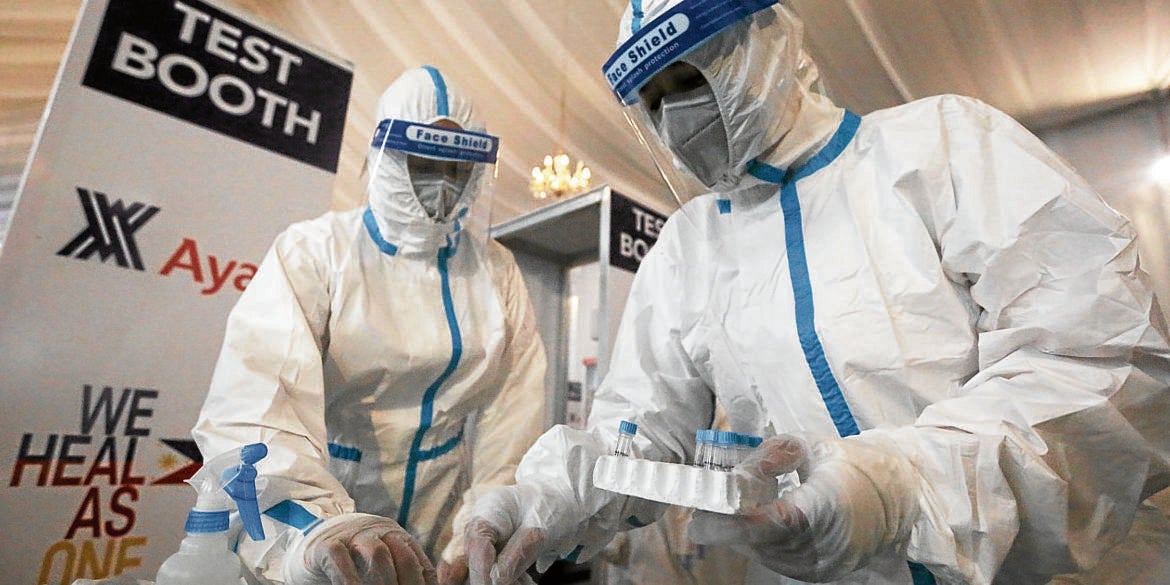 If they get sick, then our hospital will collapse’

With a growing number of hospital-based health-care workers testing positive for new coronavirus disease (COVID-19), the demand for front-liners is also on the rise. On April 27, the Filipino Nurses United (FNU) urged the Department of Health (DOH) to hire more nurses.

One in every five infections or 20 percent are health-care workers—doctors, nurses, medical or radiologic technologists, nursing assistants or barangay health workers. More than 30 of them have since died from the disease.

The World Health Organization (WHO) last week described the death rate of Philippine front-liners as “worrisome” compared to other countries in the region. Abdi Mahamud, WHO-Western Pacific region COVID-19 incident manager, said it was at least four times higher than the average in other countries.

Health Undersecretary Maria Rosario Vergeire has said that the DOH gave the Research Institute for Tropical Medicine (RITM) an additional budget of P7.9 million to hire more employees. She said the agency approved the hiring of close to 1,000 health workers.

The demand for nurses is a given so hospitals try to make things work by deploying nurses from other departments to focus on COVID-19 patients.

“Our nurses work 12-hour shifts now compared to before when shifts were eight hours,” said Dr. Norberto Francisco, Lung Center of the Philippines’ media officer. “Many of them stay here instead of going home since there is no public transportation available. Others have taken advantage of the temporary accommodations provided by nearby motel chains like Sogo, schools like Claret in Quezon City, and hostels like the one at UP Nismed.”

The staff is picked up and dropped off daily by five of the hospital’s official vehicles and several volunteer vehicles.

“Naghahagilap kami ng nars (We’re really looking for nurses). The level of care needed for patients is very high but because of the K-12 law, the entry of new nurses has been delayed,” Francisco said. “Even if nurses in government-run hospitals are paid more—a government incentive—there’s still a shortage of nurses.”
Ratio of nurses to patients

Before COVID-19, the ratio of nurses to the number of patients was one to eight. “Because of the level of care required per critical patient, it’s now one is to one.”
In the COVID-19 ward at Capitol Medical Center in Quezon City, it’s one nurse to four patients. “For toxic (critical) patients, however, it’s one is to one,” said Elaine Caday, the hospital’s chief of nursing.

Nurses at Philippine General Hospital (PGH) work eight-hour shifts daily for a week followed by a “quarantine break” lasting a week. “Those who work in the COVID-19 wards are also on duty eight hours a day for seven days but their quarantine break is ideally 14 days,” said the hospital’s head chaplain Marlito Ocon. There are times, however, when COVID-19 ward nurses are asked to come in after only seven days off because of a nurses’ shortage.

“This is because some of them have been infected or show symptoms of the disease so they end up being admitted for testing,” Father Ocon said.

Capitol Medical nurses work a total of 40 hours a week. “Two days with 12 hours of duty, two days with eight hours duty then three days off per week,” Caday said. “We didn’t change the number of duty hours per week.”

Shuttle services to and from the hospital are provided nurses who go home, but those who live far can opt to stay in-house. “We provided accommodations for them,” she added.

Late last month, the 12-hour shifts of nurses at Medical City in Pasig was rolled back to eight hours. “They didn’t want us to get over-fatigued,” said ER nurse Steven Mari Cadiz. “Back-up nurses were brought in from the other departments in the hospital to help bear the load.”

Dr. Rye Anthony Fernandez, an emergency room doctor at Olivarez General Hospital in Parañaque, said residents work 24-hour shifts while nurses have 12-hour shifts. At night when there are fewer patients in the ER, he and his colleagues are able to rest a bit and engage in friendly banter—but with surgical masks always on.
At Manila Doctors Hospital in Manila, medical staff used to have eight-hour shifts. “The nurses as well as our residents and fellows in training now work two 12-hour shifts,” said cardiologist Daniel Morales. “If you were a trainee doctor, you would have to report to work every day. Now, you go on duty for 12 hours, then you’re off for 24 hours, and then you’re on duty again for 12 hours.”

Marco Protacio, president of Protacio Hospital in Parañaque, said that shifts for the hospital’s nurses and doctors are capped at 10 hours.

“Normally, I do not allow shifts to last more than 10 hours. I also want them to get enough rest. If they get sick, our hospital will collapse,” Protacio said.
There have been times when staff without private cars would arrive late because they had difficulty getting a ride, so “the previous shift has to extend a bit,” he said. The hospital has since provided shuttle service for affected staff.

“Sometimes, they have to work longer hours just to keep the hospital running. Nurses are the most affected but the same goes with doctors, medical technologists, rad techs, pharmacists and orderlies. It’s worse when somebody falls ill so another person has to fill in when everyone is already exhausted as it is,” Protacio said.
In late March, the DOH reached out to medical and nonmedical professionals willing to volunteer their services for one month in referral hospitals. That program was roundly criticized because the agency pegged the daily allowance at P500 per volunteer. INQ