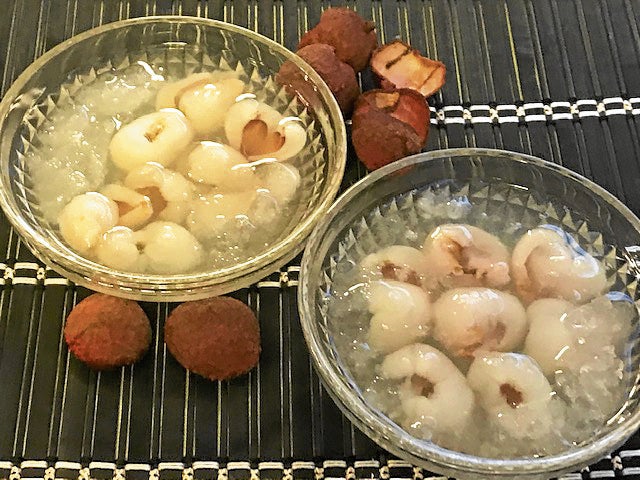 Cooking the fruit in water with sugar helps preserve it.

I recently bought a kilo of fresh lychees from my neighbor—they were very sweet and juicy, with mild floral undertones characteristic of the fruit. It cost only P180 a kilo, which was reasonable, compared to what they used to cost a few decades ago.

I still remember a time when fresh lychees were prohibitively expensive. That was probably why we seldom saw them in the market, and if we did we could hardly afford them. Back then we just made do with canned lychees.

Although native to China, lychees are also grown in other countries. Last December, while on holiday in Sydney, we were surprised to find an abundance of lychees in the market. Apparently the lychees, grown in some parts of Australia, were then in season. They were very sweet, with only a hint of tartness, and were very affordable. We feasted on them almost every day.

The lychees I bought from my neighbor proved too plentiful for me, since my husband doesn’t eat them. Afraid that they would spoil before I could consume them, I decided to preserve them by cooking them in syrup. Though the recipe is simple, peeling the lychees and removing the seeds could be challenging. The best way to peel them, I found out, is to press the bottom part (the part opposite the stem end). The skin will then come off easily.The seeds are a little harder to pry off. One method is to cut the fruit in half and remove the seed in the middle. What I found helpful were those crab forks used for picking flesh from the crab. I used the dull end to probe the bottom of the lychee, then loosened the seed from the fruit so I could remove it.

Here’s the recipe for fresh lychees in syrup.

Peel the lychees and remove the seeds. In a large cooking pan, combine the sugar and water. Bring to a boil, but do not stir so the sugar does not crystallize. Lower heat to a simmer. Let simmer until the sugar dissolves and the liquid becomes clear.

At this point you can stir in the lychees. Cook until the lychees are tender but not soggy, about one to two minutes. Remove from heat. Let cool. Serve the lychees with the syrup, chilled or with crushed ice. Store any leftovers in a tightly covered container in the refrigerator.