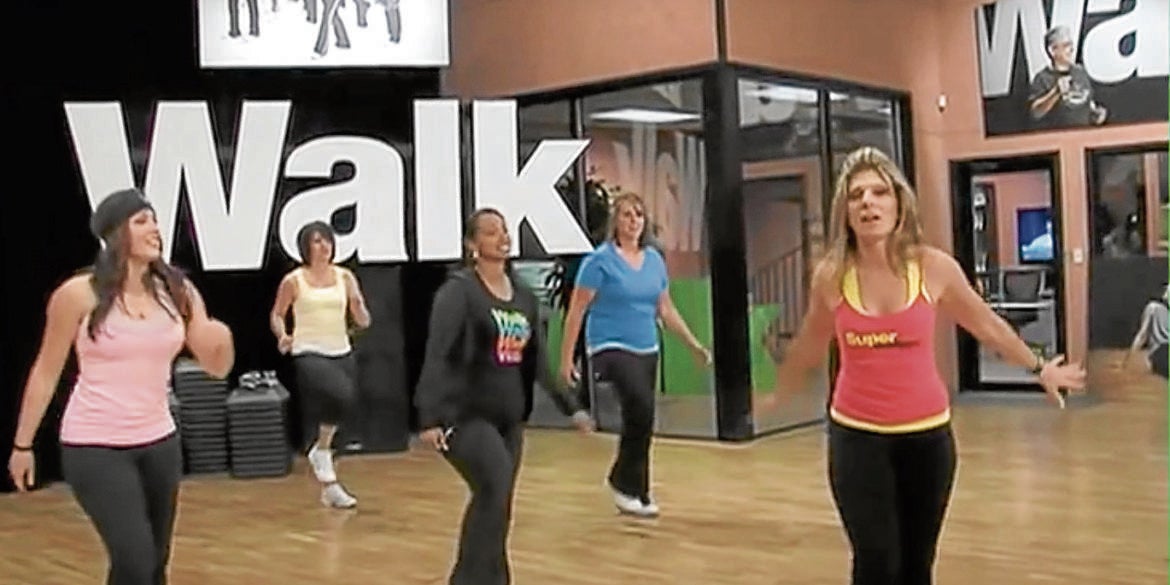 So exclaimed a twentysomething girl in a Facebook group I’m part of, when another member asked about a good, uncomplicated, free YouTube fitness routine to follow. I recommended Leslie Sansone, the 59-year-old American fitness guru whose indoor walking classes have been popular for years, but whom I discovered only during quarantine.

Soon, the posts were pouring in. “I love her!”; “I’ve been following her for years!”; “She’s my walking partner!”; and familiar hashtags like #walkwalkwalkwalk or #outtogetherouttogether, part of Sansone’s own vocabulary.

If there’s anybody who should be thanked for keeping people of all ages moving during lockdown—especially Manila’s titas, who have neither the endurance nor the equipment for high-intensity workouts—it’s Sansone, whose many videos remain surprisingly free in this age of online content at a cost.

Actual subscriptions and access to more videos on her walkathome.com website (formerly lesliesansone.com) remain a steal at $8 a month, but really, there’s enough free material. The free videos aren’t brand new, apparently, but they still do the job.

Sansone has saved many at a time when regular walkers or runners couldn’t leave the house, much less head to the gym. I had gotten bored with the treadmill, which I used as aerobic complement to yoga sessions, and it was my friend Joy who recommended Sansone.

Sansone is indeed a “tita” in many ways, what with the big hair, the toothy smile and the simple “walking-based” steps she uses that most anyone can follow: power walking in place, kicks, knee lifts and side steps. They’re standard moves in aerobics classes, but with less impact.

She’s slim and strong, but there are no attempts to look too slick or sexy in her tank top and sports pants. The team of walkers behind her in some videos is a mix of ages, body types, races and genders, and she’s chatty and lavish with the praise (“Toni, how are the grandkids?” or “Janessa, honey! Thank you!”).

She’s also forgiving, constantly emphasizing that you don’t even have to start with the same leg, you can’t go wrong, and you can go back to walking if any steps confuse you.

The music isn’t particularly exciting—no familiar dance hits, and no lyrics—but I realized it’s primarily there to keep the beat, and to allow Sansone to talk without screaming.

She starts with a warmup, then gradually increases the pace until she estimates you’re walking at around 5 miles an hour. She sometimes uses tools like a resistance band or 1-pound hand weights, but again, no problem if none are available. “Move the coffee table,” she says when the movement requires some space.

She then conscientiously brings you through a cool-down, before ending with a stretch—all the while reminding you to breathe and maintain good posture (shoulders above the hips, belly button to the spine).

The best part is the variety of sessions available, ranging from a “5-minute belly blasting walk” or a “10-minute brisk walk,” to a “20-minute boosted walk” (where she squeezes in two-minute easy jogs in place for more burn, what she calls a “boost”), a “30-minute fast walk,” and her longest free videos, 45 minutes and more, like the “3-mile walk-and-firm” that uses resistance bands for upper body work.

And lest you think they’re, um, a walk in the park, be prepared. The first time I tried the 30-minute fast walk, my heart raced; half an hour at 5 kilometers per hour on a treadmill is easier, because Sansone uses a wider range of motion, while still being able to calculate how many miles you’ve done.

She makes a big deal of it for viewers: “Guess what! You’ve done a mile!” Her “Start!” 3-mile walk is endorsed by the American Heart Association.

Then there’s the fact that Tita Leslie is, well, nice. She doesn’t diss treadmills or outdoor walking. She laughs at herself when she misses a beat. Also, it makes you smile whenever she exhorts you to “lift your hands to heaven, and be grateful for all the blessings.”

As it turns out, this wife and mom of three adult children is a Christian who started teaching in a church basement. One of her four published books is “Walking the Walk: Getting Fit with Faith” (2007), which includes spiritual reflections, and which she promoted in an interview with the Christian Broadcasting Network’s Pat Robertson that same year.

(The other three books are “Walk Away the Pounds,” 2005, and “Leslie Sansone’s Eat Smart, Walk Strong: The Secrets to Effortless Weight Loss” and “The Essential Walker’s Journal,” 2006, all available on Amazon. There are also over 100 DVDs, which have sold 18 million copies; her YouTube videos have had millions of views.)

Sansone was born in New Castle, Pennsylvania, and began teaching fitness classes in the 1980s during the aerobics craze, but realized that some of her students couldn’t quite handle the fast pace, reads her biography in livestrong.com. She created a walking program that became such a hit, the basement was packed. When a friend filmed one session, Sansone’s first VHS session was born—with what would become a multimillion-dollar fitness empire.

“Sansone’s philosophy is centered on the idea that even the simplest of movements can have a huge impact on a person’s fitness level,” says livestrong.com. “She believes walking is a sport for life, and that nearly everyone can participate. Her approach is one of encouragement and inspiration.”

Sansone holds several fitness certifications, including one from the American College of Sports Medicine, and collaborates with the American Heart Association and the American Diabetic Association. In 2014, she was inducted into the US National Fitness Hall of Fame.

“Everyone who is just starting a regular routine of fitness should have only one goal: Don’t allow anything to keep you from your walk,” Sansone said in a 2015 interview with the website SparkPeople. “Do at least five minutes of brisk walking before you say, ‘I don’t have time for this today,’ or ‘I don’t feel like it.’ The No. 1 rule to success is to do a very small ‘dose’ of fitness walking each day… it has the lowest rate of soreness or injury.”

The Harvard Health Publishing website of the Harvard Medical School agrees. In the article “Walking: Your steps to health” published in July 2018, it reported, “Researchers found that walking reduced the risk of cardiovascular events by 31 percent and cut the risk of dying by 32 percent… The people who walked longer distances, walked at a faster pace, or both enjoyed the greatest protection.”

All this, with less injury for older exercisers: “In just one mile, a typical runner’s legs will have to absorb more than 100 tons of impact force… At the same time, though, it’s a testament to the force of gravity that walkers have a much lower (1 to 5 percent) risk of exercise-related injuries than runners (20 to 70 percent).”

At a time when people are stressed out enough, Sansone is the easygoing, nonjudgmental fitness guru we need. Yoly, an IT executive and mother of two, is glad Sansone’s classes are safe and doable. “Her steps are so easy to follow that even my 6-year-old son does one mile daily. He also says the walks are fun!

“It is mostly low impact, safer for the joints. And as a yoga practitioner, I love that she focuses on alignment of the spine.”

Dana, a mother of two who calls herself a “reluctant exerciser,” appreciates that “her workouts are doable, modifiable to your fitness level, make you feel like you can achieve something even if you don’t like to exercise, don’t require much space or any special equipment. Just put on rubber shoes and go!”

Annie, a PR executive, finds Sansone “a great motivator. Her steps are easy to follow, and I can choose the level and intensity I want for any given workout. Fine, I didn’t lose weight during quarantine, but I’ve been able to maintain my weight, and I’m happy with that. If only she had a better playlist! I would love to walk to BTS songs!”

Then there’s Joy, the friend who introduced me to Leslie, an ultramarathoner who’s been unable to run outdoors. In their condo, she and her partner combine as many as three different Sansone workouts consecutively every day, so they’re at it for about an hour and a half. “You really sweat, masaya,” she told me.

I do 3 miles (about 4.8 km) three to four times a week, as an aerobic complement to yoga. I’ve knocked off about 7 lbs and upped my endurance and stamina.

So on behalf of so many titas of Manila and other fans, I want to say thank you, Tita Leslie, for helping keep us sane and healthy in our small spaces during quarantine. INQ