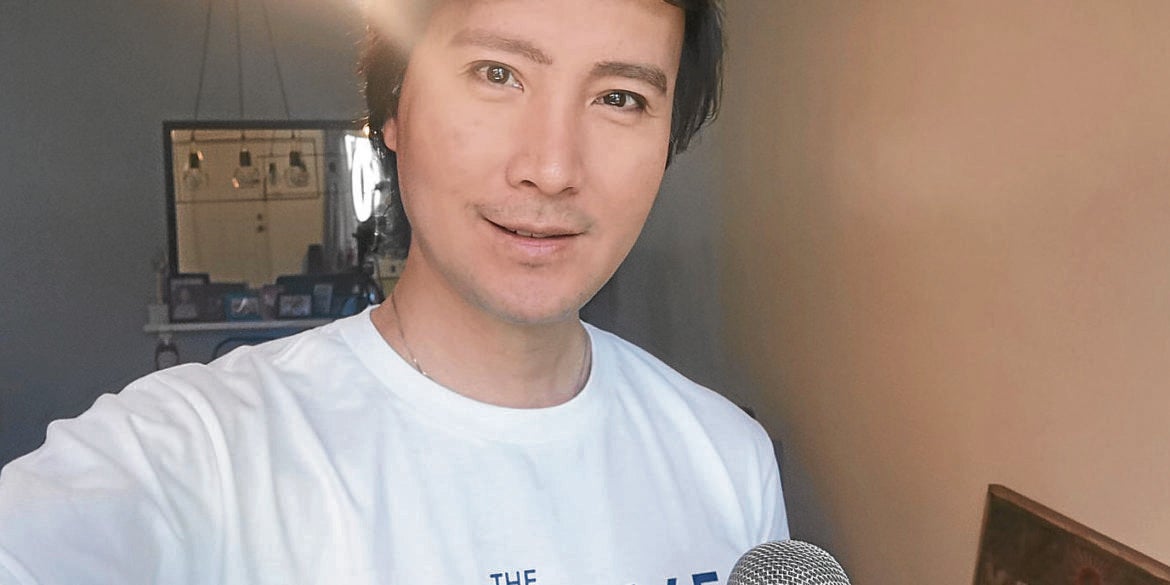 Call for ‘LOVE’: Artists do virtual gigs for private events

At 7 a.m., singer Jon-Joven Uy vocalized, then did his pre-performance ritual of drinking buko juice for a gig at 9 a.m. In a quiet room in his home, he set up the computer, lights and sound system for his virtual show.

The client, Nancy Ong, an entrepreneur in Los Angeles, had organized a reunion with friends from the United States and Cebu on Messenger. At the appointed time, Uy sang to women in their late 60s and 70s, who were relaxing in their beds. For 30 minutes, Uy serenaded them with midcentury pop songs from The Platters and Frank Sinatra.

The audience was so pleased that they wanted to make another booking.

Uy is part of The LOVE (Live On-request Virtual Entertainment) Project, an alternative venue for performing artists, one of the biggest casualties of the pandemic.

A brainchild of Kingson Sian, president and CEO of Travellers International Hotel Group Inc. which owns and operates Resorts World Manila (RWM), The LOVE Project provides artists opportunities to perform for a small fee. Menchu Lauchengco-Yulo, coartistic director of Full House, RWM’s resident theater company, explained that it initially included performers at RWM’s El Calle, Bar 360, Grand Wing and the cast of its musical, “Ang Huling El Bimbo.” Plans are afoot to include artists outside of RWM, such as the Philippine Ballet Theater.

The prospective client can visit The LOVE Project homepage on Facebook, which presents the roster of the talents in “art cards,” with their photos, contact details and resumés. The client contacts the artist to discuss details and arranges a live virtual performance.

“It’s up to the client. The session can be requests for songs, sharing a recipe, or acting techniques or a chat,” said Yulo.

A standard 15-minute session costs P600. The rate goes up depending on the extended time. They can meet up through Zoom, Google Meet, or Messenger Chat. The online payment is settled between the artist and the client.

“Michael and I also helped the artists by being their first trail audience. We checked their look, sound, etc. and gave our suggestions,” she said. “Art cards were supplied and the artists post them on all their social media platforms. That’s how they are contacted. It’s a per individual thing in that they handle the bookings.”

Yulo cited Uy as the busiest and most prolific in the roster because his bookings come from different parts of the world.

Before many countries went on lockdown, Uy had a thriving career as an artist of GMA Network and in live entertainment. By day, he was entertainment director of Alphaland Corp., bringing talents to City Club and Balesin resort. At night he performed at the Grand Bar at RWM.

During the quarantine, with no job himself, Uy kept himself busy by supporting charitable causes on Facebook Live, such as Ryan Cayabyab’s “Bayanihan Musikahan” and “Bayanihan ni Georgia,” a fundraiser for Filipinos stranded in the United States under the J-1 visa for work or study programs. He also taught music to children with disabilities.

His savings starting to dry up, Uy was told by Sian about The LOVE Project to help artists who were out of work.

Uy’s first client was Lauritzen Lindo, a doctor from Davao who saw his art card in a Facebook post. “I saw a profile of a balladeer with heavy background in theater. Very impressive,” wrote Lindo on Uy’s wall. Through an email, she told Uy that she wanted to entertain her father and family through a Zoom meeting on Father’s Day.

“She was hesitant because the price was so affordable,” recalled Uy, whose 30-minute performance for his first client was worth only P1,200. The Zoom call was at 1 a.m. since it included a sibling who was based in Chile. Uy sang hits by Sinatra, Perry Como, Frankie Valli and Michael Bublé. During his performance, the client’s father stood up from his bed and started dancing and singing to “Sway” and “Can’t Take My Eyes Off You.”

Lindo wrote on Facebook that it was the first time for the family to hold a Zoom conference. “We all had a front-seat online concert with a real, professional, world-class singer. All [family members] went live simultaneously from Rizal, Butuan, Davao City and Chile. It was the best 30-minute gift I could give as Father’s Day treat for my uncle, brothers, hubby and, of course, my daddy.”

Uy was initially concerned about the strength of the Wi-Fi and the quality of the video and audio. With more bookings, he started to upgrade his technology.

“The music and the microphone need to be integrated into one system that feeds into the cell phone. It should sound as if people are listening to music on their phone,” he said.

During the enhanced community quarantine (ECQ), Uy used Bigo Live, a live-streaming platform, to raise his public profile. “I perform and meet people from all over the world. It’s more of a promotional platform for me with the hope of getting a booking,” he said.

In another virtual gig, a birthday celebrator in Sydney drank wine with friends and sang with Uy. The program started with Bublé songs. Later the audience requested Broadway songs. With more than 25 years of musical theater experience, Uy impressed them with songs from “Phantom of the Opera.”

Uy described the joy of live virtual entertainment. “I didn’t expect that it would make an impact,” he said. “At first, I was hesitant about performing online. It’s a feel-good endeavor. I encourage other artists to undertake this. You bring happiness to people who are depressed by the crisis.“

Yulo continues to hold preproduction meetings online. Full House’s production of “Bongga Ka Day,” a musical based on the songs of Hotdog, has been postponed to next year. It was originally set for June 26, with 30 succeeding dates.

Like many artists during ECQ, she supported causes. Full House was active in fundraising for Philstage, an organization of theater producers. It hosted programs such as a panel with female directors, coaching with Lea Salonga, and acting tips from director Anton Juan.

Yulo has also performed in virtual dramatic readings and “Songs for a Changed World: COVID and Climate Change.” Produced by PLDT and Smart for the Gabay Kalikasan series, the musical revue was directed by Floy Quintos and sung by the cast of “Ang Huling El Bimbo.”

Asked if she’ll perform in The LOVE Project, Yulo demurred, “I’m not equipped—no mics or sound system, and I’m not a techie.” —CONTRIBUTED