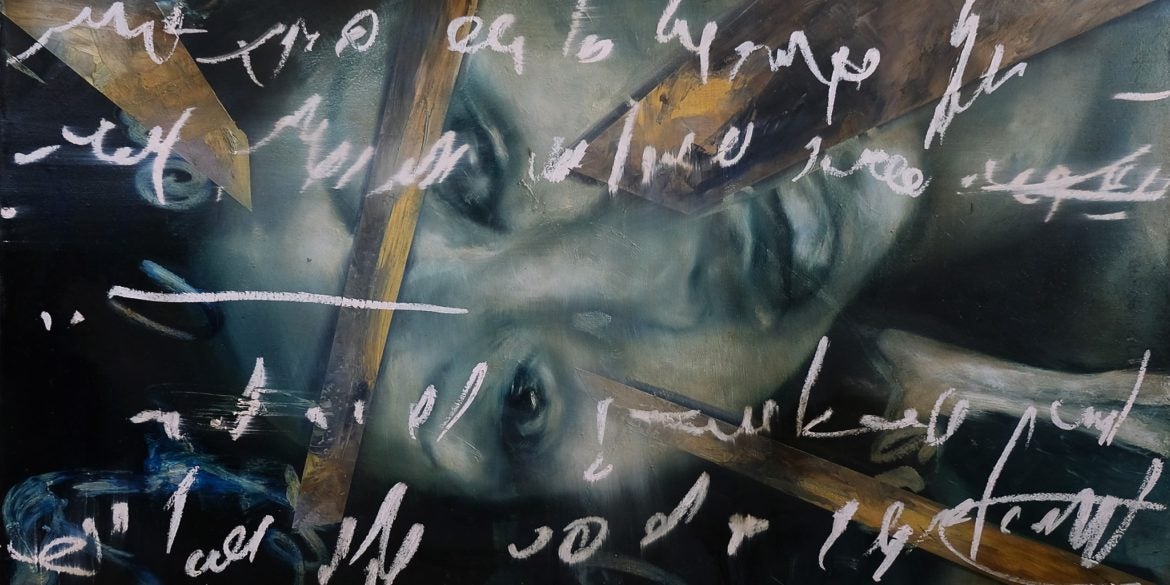 Alee Garibay’s new series of paintings were produced during the lockdown. Currently on view at Blanc, Winding features close-ups of family, friends, personal objects, suspended fragments, and scribbled thoughts. “Traces of existence, moments of intimacy, all captured suspended, paused, so I can sift and run my hands, my eyes, my mind through them in slow motion,” Alee says.

According to the artist, isolation was both a period of longing for intimacy in the comfort of relations, and a time to reflect on or break reflected images of oneself and others. “This break in identifying with a certain identity can be jarring for some but it was refreshing for me, like pressing the reset button. It was a chance to unwind and release attachment to certain modes of doing, thinking and being.”

Below I talk to Alee about the tracing of memory, the discipline of consciousness, and the romance of the painter’s studio.

I am curious about how you think about the scale of your paintings. We talked about portraiture as being fundamentally tied to a certain withdrawnness of the other person, or a unique intimacy that either cannot be fully attained or expressed. But in your paintings here, the portraits are magnified and larger than life. They are approximations of memory, but they’re also bold statements about what is remembered, if that makes sense. What are your insights on this?

“Interesting insight. I like how you phrased that—bold approximations, assertions of remembrance. How the faint tracing of memory can also be a brave assertion of who or what remains. After all, memory shapes our identity, like how water is soft, fluid, but its persistent flow cuts out rocks.”

One of the things that fascinated me in our earlier conversation was something you said about the impressionistic function of words. I’m particularly interested in this because I, too, work with text and to some extent, handwriting. With my poetry in particular, for example, there is always somehow an intent to communicate meaning, like sending out signals or a rudimentary code, however asymptotically. Your use of text is quite different, but not exactly opposite, I think. The text in your paintings are situated almost like in an in-between state of appearing and disappearing, at once silent and breaking silence. Are they whispers? Are they secrets?

“I’m happy that you can feel them as whispers and secrets, as I was channeling and encoding murmurs and hidden thoughts as I scribbled, like pouring my heart and mind out on a journal. But the process is mainly intuitive, and allowing to let the script write themselves on the canvas. I feel like a vessel for the script. They are not intelligible words, but scribbles, or maybe more correctly, they are coded words meant to channel but not reveal emotions and thoughts.”

Another thing we’ve talked about is your use of blue, or these generally cool, dark tones, palette-wise. I remember you mentioned that it is not “style” per se, but somehow a way or working that the practice has led you to. Is this correct? That is really interesting because I can also imagine how it might be difficult for someone (say, someone who’s not an artist) to understand how the act of consistently working on something can morph into a life of its own, or seemingly have the autonomy to dictate its own path. My question has to do with that tension, of being deep into a specific way or working or train of thought, vis-a-vis the creative impulse to want to try something new or go a different path. What is your personal experience with this predicament?

“Lately I have been more consciously feeling and practicing my way into presence, or just being, by feeling into the physicality and tangibility of my body and my breathing and the motions that it goes through in its day to day living. I noticed that I tend to run on auto-pilot—acting out habits, spacing out and not really engaging as myself, or as a consciously responding entity or body. In essence, not actually in touch with who or what I am, not just in a spiritually abstract sense but more importantly in a very fundamentally present—living, breathing, moving—sense.

[I let] the process develop a life of its own, painting facilitatively, than deliberately imposing the or a form on canvas … attuning to moment-to-moment creative impulses, but still conscious of and avoiding formal habits, and striving to create in an engaged, dynamic manner.

“It is a weird feeling to realize that you have been living for a while not physically being yourself, and just approximating how your built or conditioned persona should act, or speak, or not act based on the current prompt, stimuli, or lack of. Having observed that we are very much a product of habits, and how a person(a) can develop a life of its own from these set of habits, it naturally follows that a repeated practice and process can too.

“With this in mind, I try to work more authentically by letting the process develop a life of its own, painting facilitatively, than deliberately imposing the or a form on canvas, by experimenting or pushing formal and conceptual boundaries, etc., attuning to moment-to-moment creative impulses, but still conscious of and avoiding formal habits, and striving to create in an engaged, dynamic manner.”

Another great thing you mentioned is wanting to better integrate the realm of the studio practice with that of everyday life. I think every artist has a different way of thinking about this, or at least articulating it to themselves—this supposed separation or oneness of what is art and what is life. You obviously believe, and I agree with you, that these spheres should be more integral (that is, whole) than they are not, but I do wonder, to what extent? I mean to say that there are many artists who would, for example, more explicitly express their political beliefs in what they submit as works of art, and other artists less so. How do you envision the life-expansion of studio practice?

“A seeking for a more integrated creation or studio practice is still rooted in the idea of being an organic being—living, doing, creating from a response to an impulse. Maybe that is quite contradictory in the sense that art making is not necessarily, at least in the Western tradition, a natural, basic, or physiological need or predilection, but entails deliberation, will, and discipline.

“I’d like to think of it this way: that at one point, after continuing with her practice, the artist evolves into an artist (specie) and will seek a habitat (studio) and way of life (studio practice) that allows her to grow optimally.”

From what I know about your work, you almost exclusively work in painting. Personally, the painter is one of the kinds of artists that I admire most, probably because it is a way or working that doesn’t always come naturally to me, and I’m in awe of those who can transfer energy so well in this medium. Painting, in my view, is so complex but also has the ability to be simple—not simplistic, but sophisticated. I don’t know, maybe it has to do with its place within history and culture at large. How would you describe your relationship with painting as an art practice?

“I love this about painting, too, the ability to be simple—not simplistic, but sophisticated. You’re right, I’m primarily, habitually, a painter, and am beginning to become more comfortable with it. Being a product of two art schools made me too self-conscious of what art should or shouldn’t be, that being just a painter seemed so anachronistic and irrelevant.

“I think painting is also an extension of my personality. I am expressive and would like to be intimate with my relationships and interactions, and a bit suspicious of and intimidated by novelty and technology, new media. I love the tactile immediacy and intimacy of the paint, brushes and the canvas, the (still) romantic painter’s studio.

“The studio is a comfort zone, a natural habitat. I’m a painter’s daughter, after all. I think I stick to painting also because it allows for a therapeutic, even self-indulgent practice that balances my other role and passion as artist-organizer, where I am required to get out of my box and selflessly work with other artists, communities, and groups to engage pressing social concerns through art, discourse, and creativity.”