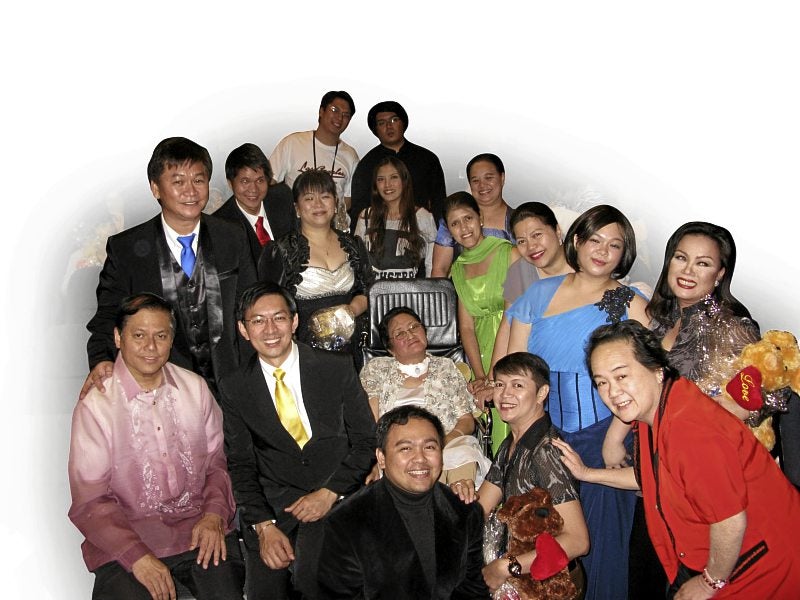 The author (right, foreground) with the artists and performers at the concert

Taking a Chance on Love

ELEANOR Trinidad was a strict and demanding professor, but was all heart when it came to dealing with people. I met her in 1981 when, tail between my legs, I crawled back to college to attempt to finish a degree. I had fooled around in Vet school and was left with two options: drop out or get kicked out of UP.

Eleanor was formidable and many students were terrified of her. As I was much older than my classmates, I did well in her classes and soon a friendship developed. When she learned of the difficulty I was having living with my adoptive mother, she took me in.

From her I learned the value of respect for life. Eleanor would not tolerate any form of violence and despite her strong exterior, was never one who would knowingly hurt any living thing.

In 1996, Eleanor was diagnosed with breast cancer and doctors advised radical mastectomy. We decided instead to storm heaven with prayers by attending as many healing Masses as we could. Some six months and 75 healing Masses after, Eleanor was confirmed to be free of cancer. No chemo, no surgery, no medication, just a firm belief in the healing that comes from the Divine Healer.

We had dealt with the cancer, but we were not prepared for the trials that would come our way in the days to come. We were at Hypermarket Makati when Eleanor (or Baby Girl as she is more fondly called), asked for bottled water, and then just collapsed. Eleanor received emergency treatment at the Ospital ng Makati but the overall picture was not good. In the absence of a respirator, she was kept alive by an ambu bag as the doctors tried to find another hospital with facilities for a possible stroke and suspected bleeding in the brain.

Medical City responded and Eleanor soon. received immediate attention at the ER as the CT scan revealed that there was indeed a brain bleed. From neurosurgeon Mike Sabalza and anesthesiologist Mau Coz, I learned the grim news: Baby Girl needed a miracle to get out of surgery alive. Somehow she pulled through.

The following days stretched on in a bumpy roller coaster ride. Just when Eleanor seemed to be improving, her condition would slip and we were again up against an unknown enemy, fighting for life.

At the helm of the team was neurologist Ed Saniel who made me an important promise: He would tell me when we reached the point of no return. Eleanor’s pulmunologist Francis Piedad did not give up as well despite our failure to wean her from the respirator.

Eleanor was finally transferred to a regular room after 56 days. She was breathing on her own and was scheduled for a peg insertion so she could be fed directly into the stomach. Having maxed out all savings, she was moved back to Osmak through the help of Vice President Jejomar Binay.

Miracles continued to come our way. By September she was fully awake and started trying to mouth simple words. By October she was more awake and finally recognized me.

In late December, Eleanor had episodes of breathing difficulty and on January 22 this year, had aspiration pneumonia secondary to severe respiratory failure. In February she had to undergo a tracheotomy.

It was music that saw us through the difficult days. The gift of song was given us by the Holy Family New Harvest Ministry choir, that sang praise and thanksgiving songs to Eleanor from the darkest days at OSMAK and again when we returned to The Medical City.

Funds have totally run out, however. We lived each day scraping together what little I made from the dog events I handled. Knowing our situation, some of our dearest friends came up with a project titled “Take A Chance on Love” made possible by a grant from The Medical City that allowed us use of its auditorium. At the helm of the fund raising concert were our dearest friends Dr. Cris Abesamis; international pianist Dr. Raul Sunico, currently dean of the UST Conservatory of Music and president of the Cultural Center of the Philippines, and Dulce. Other artist friends joined in.

The concert, “Take A Chance on Love” is actually a spinoff from Eleanor’s words last New Year’s Eve. She said, “It’s hazy outside, just like our life. We just have to give more, love more, take a chance and face the consequences of our choices. We have to take a chance on love.”

By the time you read this, we’d be home. We hope that our story becomes your story as well. When all seems hopeless, ask the Lord to hold you in the palm of His Hands. Never give up. Everyone deserves a chance at life. We all just need to take a chance on love. •

Joya Gonzalez is a veterinary medicine drop out. She is best known for her column “Me and My Shadow,” and for the many dog champions that she and Eleanor have bred and exhibited through the years. Their Domino Haus Kennel is recognized for breeding quality dogs with excellent temperament. Email her at [email protected]