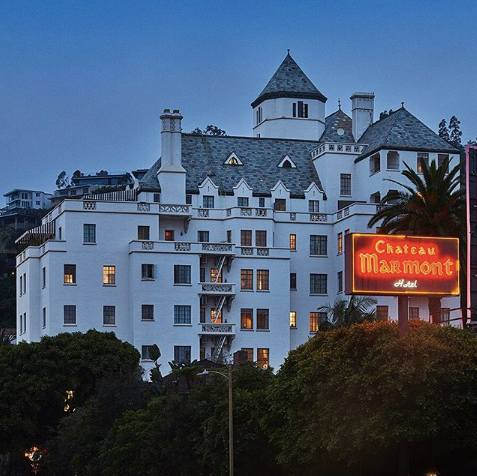 Etched into Tinseltown folklore, it is where James Dean crashed director Nicholas Ray’s bungalow to bag the lead in “Rebel Without a Cause,” Jean Harlow and Clark Gable allegedly conducted a torrid affair, and comedy legend John Belushi died of a tragic drug overdose.

The hotel is so synonymous with Hollywood glamour that it has its own film credits, appearing in movies from 2018’s “A Star is Born” remake to the musical “La La Land” and Sofia Coppola’s “Somewhere.”

But the storied institution that prides itself on being highly selective about who it admits — and then keeping their secrets closely guarded — is about to get a whole lot more private and discerning, its owner told AFP.

“I’d compare it to a superyacht…you can only deliver that kind of service — and have people on deck — if they’re almost hand-selected,” said Andre Balazs, the Boston-born hotelier who once dated Uma Thurman.

No details are yet available on the costs of membership.

But Balazs had been mulling the transition for years, with that process now accelerated by the coronavirus pandemic.

“Common sense, and even a modicum of understanding of health, requires that you surround yourself with less people,” he said.

“In this time, it allows you to be safer, and curate a more interesting crowd.”

The concept of members-only institutions offering accommodation is well established in cities like London, but newer to Los Angeles, where Soho House launched its buzzy West Hollywood outpost just a decade ago.

But Balazs insists media reports that “the Chateau” is set to ape “exclusionary clubs” like White’s in London, are wide of the mark.

Those reports triggered a backlash in Los Angeles among stargazers fearful they will no longer be able to dine across from their favorite celebrities.

“There will always be a public component” to Chateau Marmont, Balazs told AFP, including “probably the restaurant… and then maybe some public aspect to the rooms as well.”

“Something that’s become as, if not more, symbolic of Hollywood than the Hollywood sign itself… making that inaccessible is not the right thing to do,” he added.

Yet as a Los Angeles Times op-ed recently pointed out, Chateau Marmot has “long been a VIP club that only pretends to be open to the public,” catering largely to a closely guarded list of repeat guests.

Shawn Levy, author of “The Castle on Sunset,” also noted that “an infusion of initiation fees and membership dues would be a godsend, as the Chateau, like most hotels, has withered during the pandemic.”

The vast majority of hotel staff were laid off in March.

“We’ve seriously had to downsize, obviously,” said Balazs, who donated $100,000 to a staff fundraiser.

The new, member-owned model is a return to Chateau Marmont’s original roots. It was constructed as a high-end apartment building in 1929, modeled after the Chateau d’Amboise in the Loire Valley.

Balazs intends to roll out the scheme to cities such as London and New York — where he already owns hotels — and rural outposts including, ironically, “a spectacular chateau in the south of France.”

But the hotelier, 63, insists it is mere coincidence that he is starting the experiment at the legendary Marmont — his first hotel, purchased in 1990, long after many of its fabled Hollywood “shenanigans.”

“We don’t traffic in glamour,” said Balazs. “We traffic in service to our guests — discretion and service and safety, privacy.

“That’s what we make our money on.”