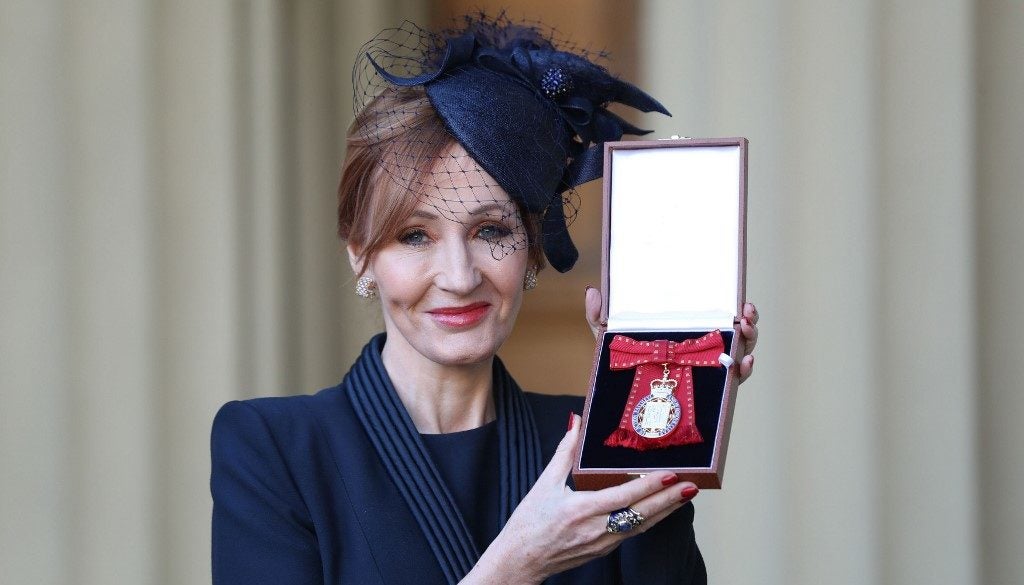 British author JK Rowling poses with her medal after being made a Companion of Honour for services to literature and philanthropy by the Britain's Prince William, Duke of Cambridge during an Investiture ceremony at Buckingham Palace in London on December 12, 2017. (Photo by Andrew Matthews / POOL / AFP)

“Harry Potter” creator JK Rowling said on Friday she would give back an award presented by the US Kennedy family after one of its members criticized her views on gender issues.

But the group’s president, Kerry Kennedy, said this month the British writer’s outspoken views on gender “diminished the identity” of trans people.

“Kerry Kennedy recently felt it necessary to publish a statement denouncing my views,” Rowling said in a statement on her website.

“The statement incorrectly implied that I was transphobic, and that I am responsible for harm to trans people,” she added. “I absolutely refute the accusation.

“In solidarity with those who have contacted me but who are struggling to make their voices heard, and because of the very serious conflict of views between myself and RFKHR, I feel I have no option but to return the Ripple of Hope Award.”

Rowling sparked controversy in June for tweeting about the use of the phrase “people who menstruate” instead of women.

“I’m sure there used to be a word for those people. Someone help me out. Wumben? Wimpund? Woomud?”, she wrote.

It led to a string of denunciations, including from the actor Daniel Radcliffe, who played Potter in the blockbuster film franchise, and other actors who starred in the series.

Rowling had earlier expressed support for a woman who had lost her job over what her employer deemed to be “transphobic” tweets.

Rowling said “accusations and threats from trans activists have been bubbling in my Twitter timeline” ever since but she had also been “overwhelmed” by private messages of support.

She said the “toxicity” around the discussion was damaging and frightening for people within and outside the trans community.

“I’ve been particularly struck by the stories of brave detransitioned young women who’ve risked the opprobrium of activists by speaking up about a movement they say has harmed them,” she said on Friday.

“I’ve been forced to the unhappy conclusion that an ethical and medical scandal is brewing.”

Rowling’s comments are the latest controversy surrounding her work. In some parts of the world, they have been banned for being linked to witchcraft and the occult.