How to cook like a Kapampangan | Inquirer Lifestyle ❮ ❯ 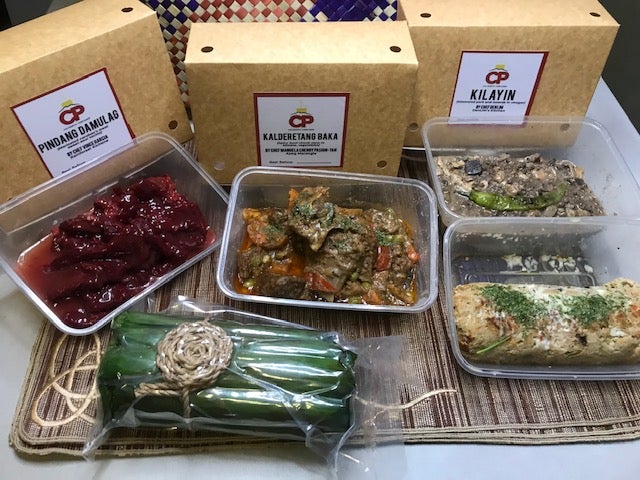 The food was packed in an old-fashioned bayong, as if someone had gone to the palengke and picked freshly-­harvested ingredients. Inside, individually packed and labeled, was an assortment of Kapampangan dishes: pindang damulag, tenderized carabao meat cooked in a sweetened marinade, made by chef Vince Garcia of Rainforest Kitchen; kalderetang baka, a stew of spicy beef chunks in a thick tomato sauce, made by chef Cherry Pasion-Tan of Apag Marangle; kilayin, chopped pork and innards simmered in vinegar, made by chef Den Lim of Denlim’s Kitchen; and a roll of embutido, meat loaf of ground pork, sausages and eggs, made by chef Judy Uson of Café Noelle.Also in the cornucopia: a bundle of suman, which I later found out, is called suman Pasko.

It was indeed quite a feast from a group of passionate chefs who have banded together to create Culinarya Pampanga. Started in 2016, the group aims to “preserve, promote and pass on the culinary traditions of Pampanga and of the Philippines through research, constant education and development.”

With Pampanga being the country’s undisputed culinary capital, that shouldn’t be too difficult. Their province’s reputation already gives all nine members a head start.

Yet, as with nearly every company during this time of the pandemic, their restaurants too suffered setbacks; for a time, business was closed.

But like the hardy, dedicated chefs that they are, the group bounced back and reopened about a month ago. With a kitchen based in Quezon City, they are now accepting orders for food delivery in Metro Manila.

“We’ve brought the business to Manila,” says chef Sau Del Rosario, a leading member and cofounder of the group. “Kailangan kumita (we have to earn). We have to support each other.”

With a mouthwatering, pulse-quickening menu that includes both traditional and modernized Kapampangan cuisine, their delivery service should easily be deluged with orders.

“Some of the dishes are classic, others are modernist,” explains Del Rosario. But whichever side of the spectrum they come from, the dishes are all made with passion.

Indeed, for the group, it’s a matter of pride as well as a love for their food heritage. Their mission/vision includes propagation of heirloom culinary traditions and passing this on to the next generation.

Certainly an heirloom delicacy is the suman Pasko, made by an octogenarian whose family is one of the few that grows duman, a fragrant, yellowish green rice grain, so treasured by the Kapampangans that its harvest is celebrated every December.

Del Rosario also assures customers that they are very particular about their delivery service. “We take note of the delivery time,” he says. Indeed, the food that was delivered to me was still warm, and neatly packed in spill-proof, reusable containers.

What tips can he give home cooks so their food can at least approximate the richness and flavors of Pampanga cuisine?

First, says Del Rosario, you must have the mood to cook, you must have the feel of cooking: “It should be in your heart.” He himself cooks as an extension of his love for his mother. When he cooks, he says, “I commemorate my mom’s memory.”

A second tip is slow cooking. Kapampangan food is all about stews, he says, and for this low fire is ideal. That’s why cooking over wood fire is often practiced in Pampanga—because it produces only low heat, which brings out the flavor of the ingredients.

“Do not rush,” he admonishes. “Meat, for example, is a muscle, and if you use high heat, it will toughen.”

He also advises home cooks to use the best ingredients. This doesn’t necessarily mean using imported, expensive ones. For stews like kaldereta, for instance, the best parts are the leg and shoulder, or the dark part of the carcass, because that’s where the flavor lies.

Naturally all that takes time and patience, so for those who prefer to order, rather than cook a meal of true Kapampangan heritage, Culinarya Pampanga offers a delicious alternative.