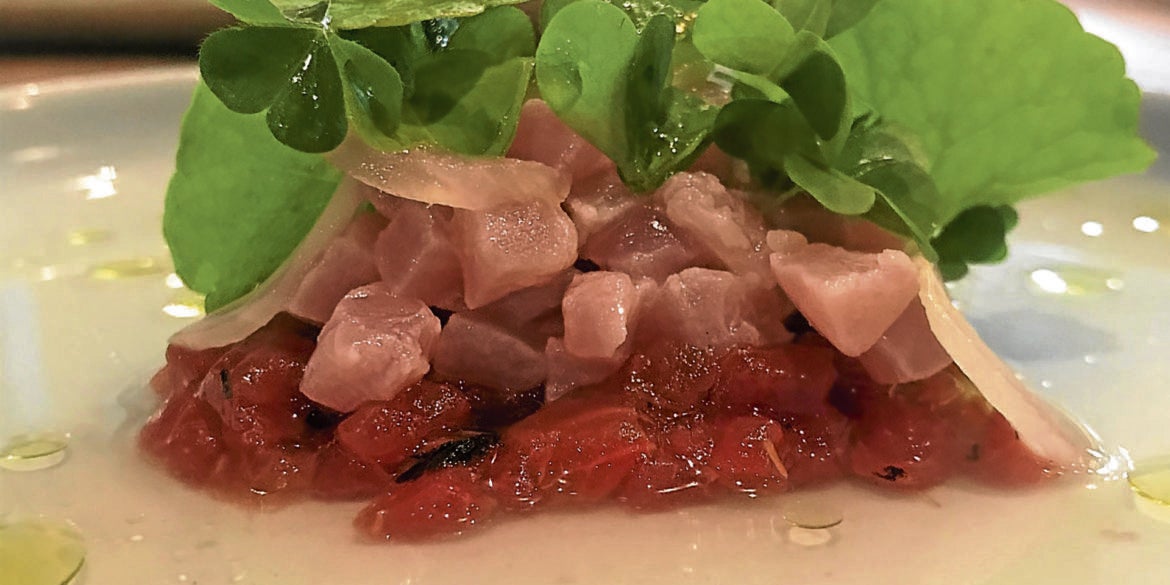 The chefs of Hapag have been making the most out of their quarantine downtime. It took them two months to get back on their feet and set safety measures inside the restaurant, but once things were in place, Kevin Navoa, Thirdy Dolatre and Kevin Villarica were quick to adjust to the times and get back into the kitchen.

In May, their first anniversary, they rolled out their Hapag sa Inyong Hapag meal kits, which let customers do minimal prep and reheating to enjoy popular dishes like Chicken Inasal, Kare-Kare ni Lola V and Warek Warek.

Later that month, they shifted to their Hapag Family Meal, featuring ready-to-eat food items. Apart from being a testing ground for their new tasting menu, it acted as a creative avenue as well, as they got to collaborate with other chefs for their takeout menu.

They took further advantage of the lockdown by brainstorming on new dishes. They wanted a complete overhaul of their initial tasting menu.

“The first menu was safe, and we made sure that it was familiar,” says Dolatre. “The second is more daring, technique-driven, and we went deeper into Filipino culture and cuisine while maintaining the essence of Filipino flavors.”

With time on their hands, they employed a more thorough and open R&D process. The result is a menu that’s both inspired and inspiring—a chocolate sticky rice croquette made with local chocolate, crowned with crispy palad dried fish; a one-bite tartlet filled with local oyster mushroom, kesong puti mousse, sukang Iloko jelly and arnibal; tuna loin tossed in a citrus dressing, sitting in a shallow pool of watermelon consommé; and grilled prawn glazed with homemade dayap miso and served with buro and pineapple-labuyo jam.

As a starter, fermented black rice bread is spread with purple potato halaya, something Navoa came up with, inspired by a work trip to Kuala Lumpur.

“There was one bread accompaniment that they served at Dewakan Restaurant where I trained. It was fermented tapioca called tapai ubi,” he says. “It was fermented with ragi, which we call bubud in the Philippines to make rice wine. I tried to do this with purple potato and preserved it in charcoal oil. We eventually decided to add another process and make it into purple potato halaya to make it more Filipino.” It lends a subtle sweetness that goes well with the sourdough.

Dolatre turned to comfort and nostalgia in composing Miki at Empanada. “Growing up with an Ilokano mother, I was exposed to the diverse cuisine of Ilocos. We would travel to Batac, my mother’s hometown, and always eat merienda at the riverside empanadahan.”

The miki is represented by a mound of scallion noodles on annatto chicken broth, dotted with soy-pickled quail egg, while the empanada comes as duck longganisa, papaya and banana ketchup on crispy rice tostada.

Compared to the maiden menu, Hapag’s new dishes are noticeably more regional. To wit, there’s Kambing Luzviminda. “Goat is heavily used in provinces but here in Manila, it is seldom used in restaurants,” Navoa notes. “There is a misconception that kambing isn’t as tasty as other more common proteins like pork, chicken and beef. Hopefully, the dish can change people’s misconception.”

The dish comes as a trio, each inspired by a major island province: kilawing kambing with pandan ensalada for Luzon, kambing inasal with salsa verde and annatto tortilla for the Visayas, and kambing satti pastil with pickled cucamelons for Mindanao.

Capping off the eight-course menu is ginanggang ice cream made with black banana ice cream, Auro chocolate nibs, Benguet coffee oil, meringue and banana streusel. The creamy frozen treat is dairy-free, with the starch from the bananas giving it a smooth body and mouthfeel.

In the weeks to come, they will also launch their own line of ice cream, starting with three merienda favorites as flavor inspirations—champorado at tuyo, banana cue and espasol.

“The pandemic forced us to think of other products to sell. We realized that ice cream is something that can be easily appreciated and can bring comfort. We developed flavors that are very Filipino but different from the common sorbetes,” says Dolatre.

Apart from their food delivery line and new menu, the trio also had to adapt and find ways to be creative through bayanihan during the lockdown.

“Working with The Lost Bread and Auro chocolates has brought us closer and showed us that we can produce a beautiful product through collaboration and our common love for food,” Dolatre says. “The silver lining in all of this is that we have made friends that we can keep forever.”