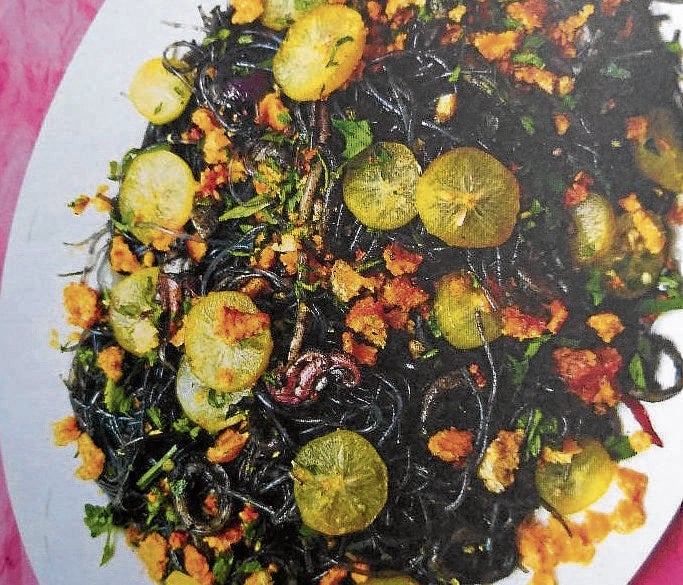 “Pancit pusit” (from the book “Milkier Pigs and Violet Gold,”)

A reader, Miles Santiago, wrote to say what was wrong with the pancit pusit recipe of Cavite (or pancit choco en su tinta, as Chabacanos call it) that my son was using. He read it in my June 25 column.

Santiago is from Cavite City but only visits his mother who lives there. He said the pancit is usually served for merienda or dinner. Yet he contends that no one cooks pancit pusit from scratch, that one must make adobong pusit first, and any leftover is added to noodles. Why? His answer is interesting: “How do you extend the life of a small bowl of leftover adobong pusit to serve the same number of people? Sauté it once more in garlic and onion then mix with bihon! Sprinkle it with kinchay (Chinese parsley) and onion leaves and you have a very tasty merienda or dinner fare.”

I hadn’t received Santiago’s letter when I decided to do what he recommended in his letter. I was guided by Bryan Koh’s recipe in his book, “Milkier Pigs and Violet Gold” (Xochipiili, 2016).

Koh’s first step is to cook adobong pusit the way it is done in his Malabon chapter. That involves frying the squid first in garlic, onion, ginger, bay leaf and black pepper. Then simmer the squid in the adobo mixture for one hour. The time element told me that the squid should turn out tender because, I remembered Glenda Barretto telling me, cooking squid is tricky because you either cook it for a short time or a really long time. Since I had no idea what “short time” meant, I thought it best to do it for a long time. And the squid was tender. 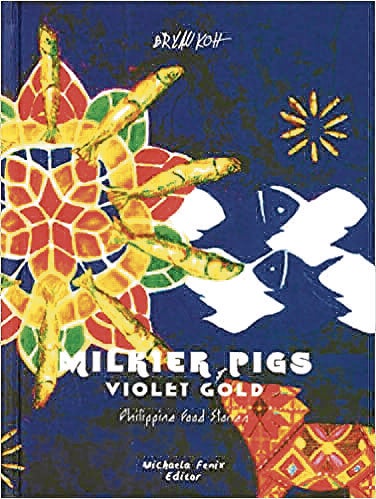 Santiago, however, wrote that the Cavite City adobong pusit recipe involves braising the squid first in garlic, vinegar, cracked pepper, salt and bay leaves. The next step is frying the squid “until almost crispy and boiled again to let the ingredients blend more and cook the vinegar longer.”

This reader also had something to say about squid ink. Squid ink, according to him, is darkest if the squid is fresh. So there is no need to add ink from the bigger cuttlefish called lumot. And you can tell freshness if the tentacles stick to you when you hold them and that “you can actually see them change colors!” What he says is true and was what I was taught to look for when buying squid.

The other mistake, according to Santiago, is using sotanghon (bean thread noodles) instead of bihon or rice sticks. The latter is used in the Cavite version and I thought that he might be right because sotanghon is too slippery to have the black sauce uniformly coat the noodles.

Ige Ramos who wrote the book “The Republic of Taste: The Untold Stories of Cavite Cuisine” (Ramos Design Studio, 2018) said the pancit choco en su tinta is “one example of Hokkien, Malay, Mexican and Basque confluence that persists in the cuisine of Cavite.”

Santiago also informed us that the pancit can be found in the “lehitimong Chabacano karihan” (legitimate Chabacano restaurants) but is “never served during the lavish ‘Soledad’ fiesta!”

Mention of the fiesta made me curious. My research showed that the fiesta is held in honor of the Nuestra Señora de la Soledad de Porta Vaga, patroness of the province of Cavite. The icon was said to bless departing galleons from Cavite to Acapulco.