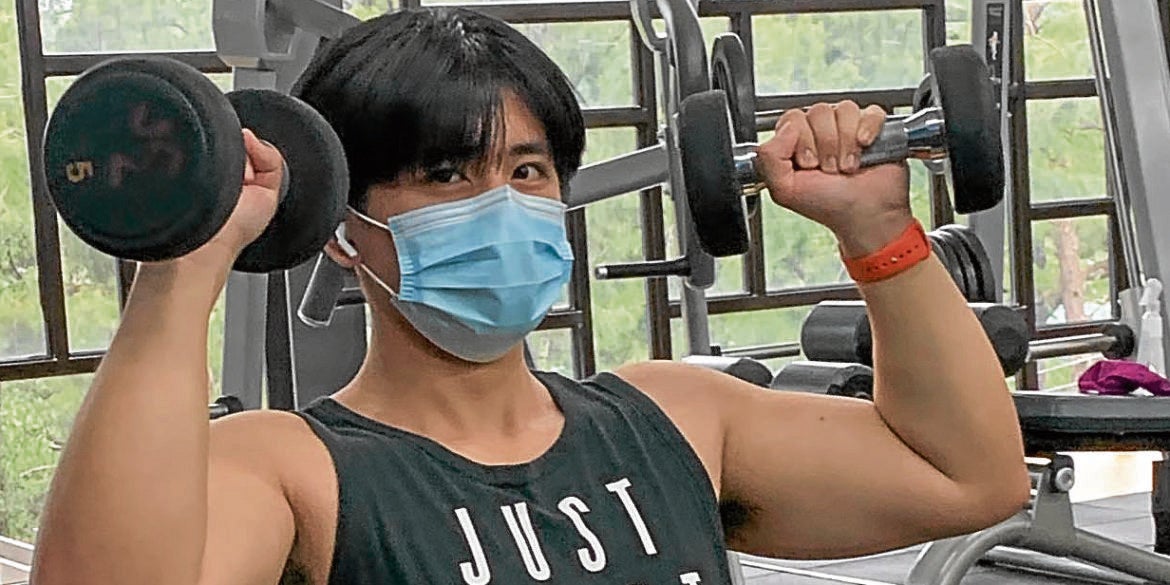 Back at the gym after lockdown is eased in Baguio

How losing 100 pounds also changed his way of thinking

The turning point for Tom Tacwigan came in 2015 when he couldn’t fit into the pants he was supposed to wear to his cousin’s wedding. Peeved and panicky, he still managed to buy a larger size, but the near mishap forced him to seriously consider his options.

Fortunately, his cousin who is a personal trainer allowed him to join his classes in his gym. Tacwigan went almost every day and trained for two to four hours daily. On that first week alone, he lost almost 9 pounds.

“I wanted to build muscle immediately but my cousin set me straight,” Tacwigan, 25, told Lifestyle in a phone interview. “He said I should lose some weight first through overall training, so he made me do a lot of cardio exercises.”

Tacwigan, who was studying to be a pilot, had to juggle classes with sessions at the gym. Whenever he had the chance, he would hit the gym and slog through his paces—cardio exercises and high intensity interval training. After a little over a year, he was able to reach his weight goal.

“I [am] very happy. My next long-term goal is to get that beach body,” he wrote in an online article at the time.

Since shedding over 100 lbs, he has also changed his way of thinking.

Tacwigan has become more accepting of his body and its limitations. On his Instagram (@iamtomreuh) where he has 131,000 followers, he is a vocal supporter of body positivity.

In one post, he writes, “Who’s summer body ready? We all are! Don’t let unrealistic body expectations stop you from wearing that bikini you’ve been wanting to wear or going shirtless on the beach. You do you. Your happiness comes first.”

Getting to this point of acceptance took Tacwigan a while. Even as he was growing up, he was known as “the fat brother” or “the fat one.” His younger brother Raven ate anything he liked and still managed to maintain a trim figure. In videos posted on his YouTube channel (Tom Reuh Tacwigan), Tacwigan describes Raven as “a child of the gods,” being genetically blessed. Still, one can see that the siblings are very close. Raven, who used to model, once proudly said in a survey that he looks up to his brother.

Back in his hometown of Baguio since start of lockdown, Tacwigan chose to take it slow.

He listed down a few tips for those who missed going to the gym:

“I’ve been on both sides so I know how it feels,” he said. “I used to be obese but then I worked out and lost the weight. I also developed a healthy attitude to food. We’re fortunate because here in Baguio we have access to a lot of fresh vegetables.”

He eats a lot of salad but refuses to categorize food as either bad or good. “If you feel guilty about eating ‘bad’ food, the tendency is for you to eat less on that day, which can lead to overeating in the long run,” he said.

Developing a healthy attitude to food includes knowing that it’s OK to indulge once in a while. “Instead of eating the entire thing, why not just take one or two bites? It will still taste the same anyway.”

Now that the gym he goes to in Baguio has reopened, Tacwigan is back lifting weights, his mask on and practicing social distance.

“Don’t rely on the numbers on the scale. It’s one way to measure progress but don’t depend on it entirely. Progress photos, gym performance, self esteem and how you feel are some measurements of progress,” he said. INQ