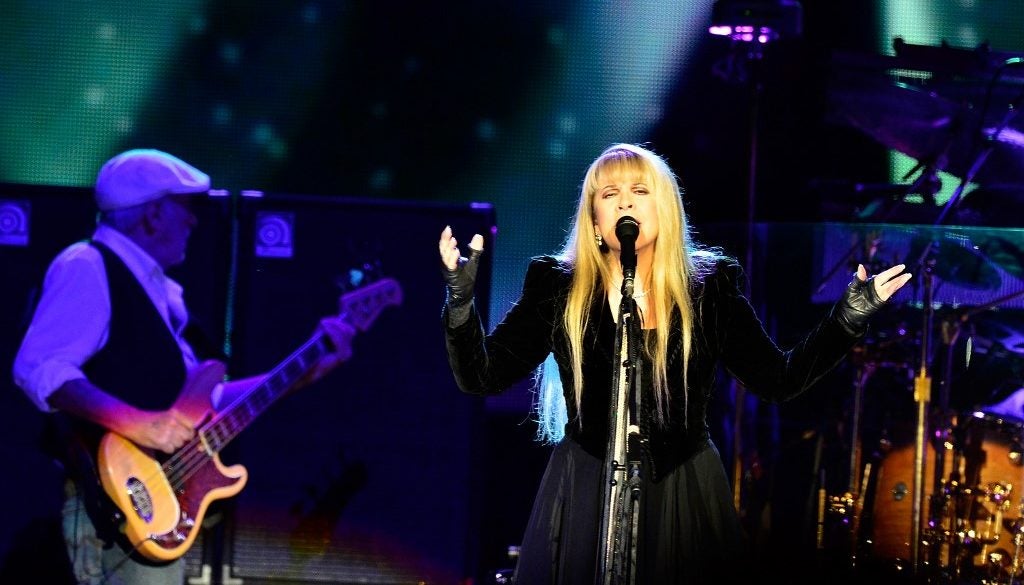 (FILES) In this file photo (L-R) John McVie and Stevie Nicks of Fleetwood Mac perform at the Prudential Center on April 24, 2013 in Newark, New Jersey. - A viral TikTok video featuring a laid-back skateboarder lip-synching to Fleetwood Mac's "Dreams" has propelled the 1977 hit back into the Billboard Hot 100 after an absence of more than three decades. TikTok user doggface208s antics -- as he cruised down the street, sipping a family-sized bottle of cranberry juice -- quickly struck a chord, racking up 8.6 million likes. (Photo by Brian Killian / GETTY IMAGES NORTH AMERICA / AFP)

A viral TikTok video featuring a laid-back skateboarder lip-synching to Fleetwood Mac’s “Dreams” has propelled the 1977 hit back into the Billboard Hot 100 after an absence of more than three decades.

TikTok user doggface208’s antics — as he cruised down the street, sipping a family-sized bottle of juice — quickly struck a chord, racking up 8.6 million likes.

And beyond propelling its creator — real name Nathan Apodaca — to viral fame, the video has reignited interest in the 70’s country-rock legends.

“TikTok has driven catalog hits back to various Billboard charts before… but never a song this old and a Hot 100 rebound this high,” Billboard reporter Tatiana Cirisano wrote in a post on the magazine’s website.

“It shows that TikTok’s tried-and-true power to catapult songs to mainstream recognition is only getting stronger.”

Phil Collins is another classic artist to have benefited from a viral-video bounce.

In August, a YouTube clip in which two 22-year-olds shared their first reaction to his famous drum fill from “In the Air Tonight” sent the song into the number two spot on Apple’s iTunes chart.

The return of “Dreams” to the charts has also sparked a broader surge of interest in Fleetwood Mac’s back catalog, with Billboard reporting a bump in streams for the rockers’ other work.

And on Tuesday, Nicks posted her first video on TikTok, singing along to “Dreams” while sitting at a piano, lacing up a pair of roller skates.

She tagged doggface208 in the video, which also featured a similar bottle of juice.