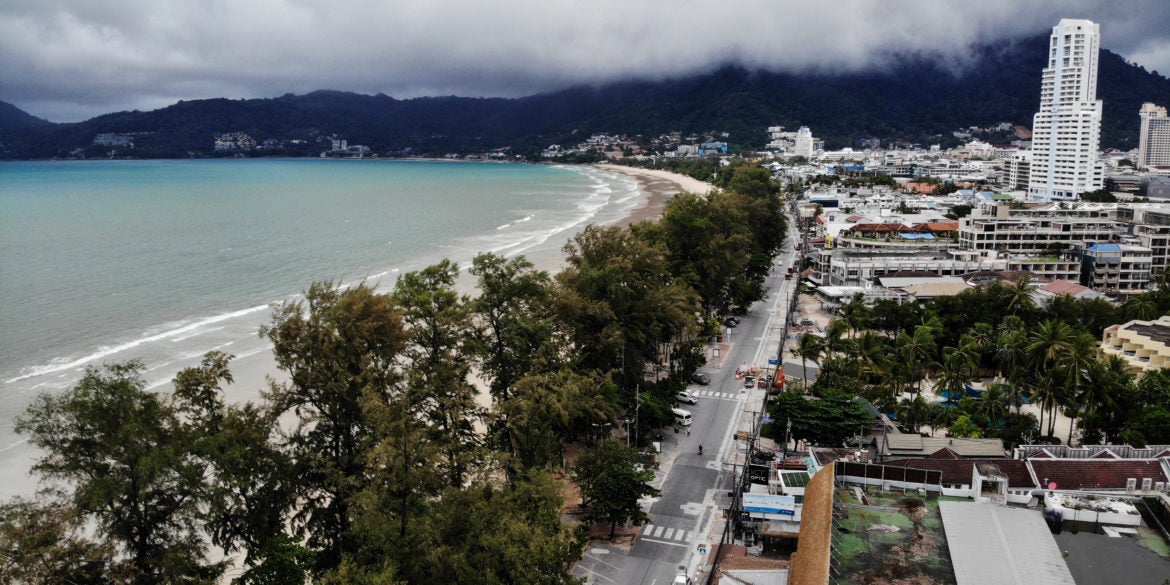 This aerial photo taken on October 1, 2020 shows a near-empty main road along Patong beach in Phuket. - A private infinity pool, gourmet meals... and round-the-clock surveillance from a "war room" -- the first foreigners to arrive in Thailand will be ensconced in luxury conditions under some of the strictest quarantine rules in the world. (Photo by Lillian SUWANRUMPHA / AFP) / To go with 'THAILAND-HEALTH-VIRUS-TOURISM' by Thanaporn PROMYAMYAI and Sophie DEVILLER

Thailand has welcomed its first group of tourists in seven months, as part of an experiment aimed at testing if a wider opening is possible as the coronavirus cripples the kingdom’s economy.

A planeload of 39 Chinese tourists flew into Bangkok’s Suvarnabhumi Airport Tuesday evening from Shanghai to a welcome from the staff in full protective equipment.

The visitors underwent health checks and had their luggage disinfected, before donning protective clothing themselves and being whisked away for two weeks’ quarantine.

“It’s a welcome sign that foreigners are confident in our safety measures,” Health Minister Anutin Charnvirakul said in a statement.

“I instructed officials to take good care of the tourists, because if they’re safe, Thais are safe too.”

The pandemic has brought the Southeast Asian nation’s economy to its knees, with eight million expected to lose their jobs by the end of the year.

Many of those losses will be in the tourism sector, in a country that saw 40 million international arrivals in 2019.

The holidaymakers have come under a special tourist visa scheme, which offers 1,200 spots and allows people to stay for up to nine months.

The arrival numbers were much smaller than the 150 passengers authorities touted last month.

Tourism officials declined to give a reason but insisted it was not linked to recent confrontations between pro-democracy protesters and police in the Thai capital and elsewhere.

Tourism consultant Bill Barnett admitted the ongoing unrest was damaging Thailand’s image but said the country could channel visitors away from protest-hit Bangkok.

“Thailand will become an economic basket case if it doesn’t bring back tourism,” he said.

Mario Hardy from the Bangkok-based Pacific Asia Travel Association agreed, saying civil unrest had never dissuaded tourists from visiting Thailand in the past.

“They know it’s isolated, a local issue and not targeting tourists,” he said.

The second group of 147 Chinese tourists from Guangzhou is due to arrive in Thailand next week, followed by a flight from Scandinavia in November.