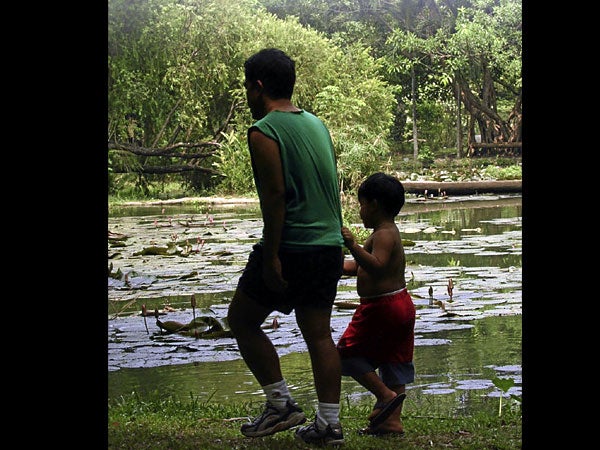 As a professor and administrator at the University of the Philippines Diliman, Quezon City, I am constantly amazed by the number of male faculty and students who talk to me about problems with their fathers. They don’t usually ask for advice, at least not initially, but are instead looking for anthropological explanations as to why Filipino fathers are the way they are.

Over the years, I’ve found a pattern to the way these “problematic” fathers are described and, with what I know from anthropology, I can say these traits are not unique to Filipino fathers. Not only that, there seems to be some common causes.  The kindest thing I can say at this point is that humans grapple more with fatherhood than motherhood, perhaps because this fathering role has emerged only recently in our evolution. The mother in most species has to stay with her offspring for prolonged periods, while fathers in most other species are deadbeats before you can even spell dad.

The complaints that I get suggest that there’s a lot of conflict involved in this search for fatherhood, with what seems to be contradictory behavior. We lament that Pinoy fathers are, on one hand, distant with their sons especially when it comes to outward displays of affection, and yet are terribly interventional on many of their sons’ personal concerns, especially career choices and jobs.

Somewhat related to this, Pinoy fathers give out praise only occasionally, if at all, when it comes to their sons, and yet can be terribly harsh – verbally, sometimes physically – with them. The harshness comes even for the most trivial of mistakes, a bungled chore immediately provoking such comments as “clumsy”… or worse.

When I first thought of doing this article, I thought of calling it “Pinoy Oedipus,” taking off from Freud.  Freud coined the term “Oedipus complex” from a Greek tragedy where Oedipus has this intense attachment to his mother and resentment for his father, whom he sees as a rival.  There’s an element of fear that Oedipus has for his father, including a fear of castration from this elder as they compete for his mother’s affection.  Using this Greek tragedy, Freud proposed that in families with strong mother figures and weak or absent fathers, sons are more likely to grow up homosexual.

That explanation for homosexuality has been thrown out by psychologists and psychiatrists but remains deeply embedded in popular imagination, internalized even by people who have never even heard of Freud.  Perhaps, in a way, all cultures have a kind of Oedipus complex, where the men are constantly fearful of their sons turning out, not necessarily homosexual, but “unmanly.”  Rites of passage like circumcision were meant to impose great pain and test one’s manliness.

In the Philippine context, the fear of turning out a homosexual – read “weak” and “effeminate” – is probably stronger, thanks to homophobia propagated by Hispanic Catholicism, and is manifested in an almost exaggerated masculinity and the need to constantly prove it. The result is what I described earlier in this article, the father remaining emotionally distant, yet constantly trying to make sure his son conforms to certain macho norms.

The stinginess with praise, accompanied by frequent put-downs for lapses and mistakes, becomes part of the making of a strong son. The paradox is that while maintaining emotional distance, the Pinoy father insists on constantly poking into his son’s life. It can start early, for example, in the type of activities a son can engage in. I know Filipino fathers who will not even let their sons take piano lessons for fear that this could turn them gay. Later it extends into career choices, with fathers insisting on a “manly” job, which isn’t necessarily defined as requiring manual dexterity but one where you compete and earn lots of money.  Which means being a professor doesn’t rate too highly.

This interventional attitude is part of the patriarchal system, the need to rule the roost and maintain the family name especially for the public. The compulsion to intervene can extend even across generations.  A young professor once complained to me, “He tried to direct my life for years and now he is trying to do it with my son.”

Woe, indeed, to those who carry the patriarch’s name, attached to “Junior” and “III.” I also suspect the interventional attitudes worsen as you go up the socio-economic ladder because of the need to keep up with (male) neighbors and friends.

It will take time to change all this, but a new generation of fathers is questioning the old norms.  Even more importantly, there is a consciousness that we are our fathers’ sons, and that for all the complaints we have about our fathers, we do run the risk of replicating some of their child-rearing techniques, confusing meddlesome parenting with nurturance, for example.

Or being unwilling to seek support from other fathers about parenting, as I’m doing with this article. I’ve noticed  that I share about parenting much more with women, and almost never with men. The idea that men can band and bond over “kid matters” remains one of the last barriers to hurdle as our fathers’ sons.