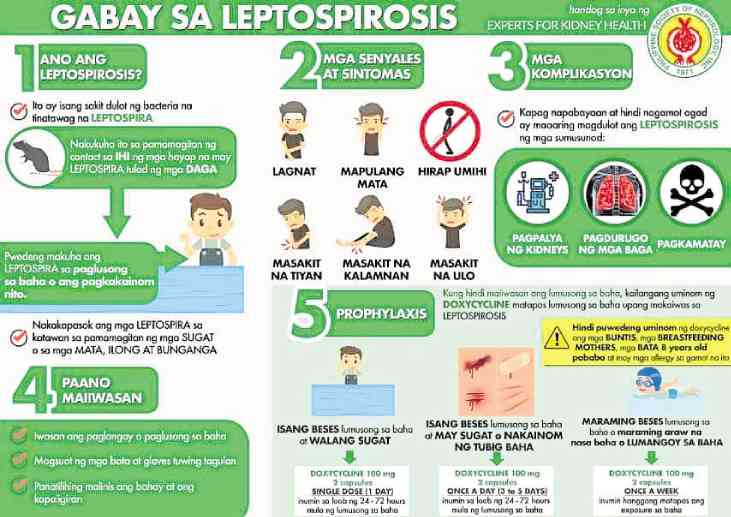 With the floods come deadly leptospirosis 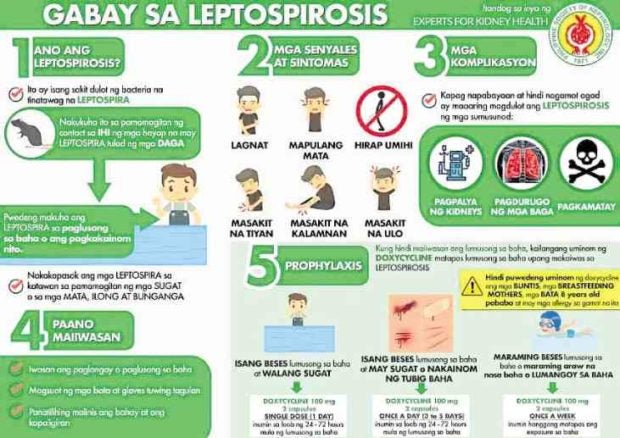 With the heavy rains and floods, COVID-19 will temporarily take a back seat, as concerns for leptospirosis rise. With the inevitable wading in floodwaters during the heavy downpour Typhoon “Ulysses” (international name: Vamco) caused, the cases of this flood-borne disease are expected to increase dramatically.

Leptospirosis is usually transmitted to humans through the urine of rats. The leptospirosis bacteria in floodwaters infects people who wade in the floods, by entering through people’s cuts and skin abrasions. After a short incubation period, the patient presents with flu-like symptoms with fever, muscle pains and headache. This poses a diagnostic dilemma, since it’s difficult to distinguish from COVID-19 in the early stage.

So, the history of wading in the flood is very important to suspect leptospirosis, especially if it already presents with kidney and liver symptoms like jaundice or yellowish discoloration of skin. If not detected and treated early enough, some cases of leptospirosis can deteriorate and lead to kidney and liver failure, and death.

The good news is that leptospirosis can be easily prevented with prophylactic antibiotics. Dr. Dolores Banzon of Philippine Society of Nephrology sent me this advisory from their society.

1. If you waded in floodwaters just once (single exposure), and you don’t have cuts or skin lesions, you’re considered low risk. You just need to take a single dose of doxycycline 100 milligrams, two capsules single dose within 24 to 72 hours.

2. If you have some cuts or lesions in your skin, you’re considered moderate risk. Take doxycycline 100 mg, two capsules for 3-5 days. Start ASAP and no later than 72 hours after.

3. If you have continuous exposure, with or without skin cuts or lesions, you’re at high risk for infection. Take prophylactic doxycycline 200 mg once a week until you stop wading in the flood.

Leptospirosis is a real and potentially serious threat during the rainy season, no thanks to our lack of sanitary waste disposal and increasing rat populations. This highlights the need for an effective rodent control program in areas where flooding commonly happens. It’s still the best way to prevent leptospirosis. I’m not sure if the Department of Health (DOH) has allocated any budget for this. The DOH, though, is providing free doxycycline through the health centers.

The death rate for leptospirosis is much higher than COVID-19. In a published report authored by Dr. Al-Shere T. Amilasanthe in collaboration with the Centers for Disease Control and Prevention, 51 (10.8 percent) out of 471 patients, admitted at San Lazaro Hospital following a typhoon several years ago, died.

The risk of dying was much higher in the older patients, and those who presented with hemoptysis (coughing out of blood), anuria (scanty urine output), jaundice (skin yellowing) and delayed treatment with antibiotics like doxycycline.

The authors wrote that deaths could have been reduced if these risk factors were detected and appropriate management given early without waiting for confirmatory laboratory tests. Laboratory confirmation can be a challenge in resource-poor settings, especially during outbreaks. So, physicians just have to use their clinical instincts, and have a high index of suspicion during the monsoon season with recent episodes of flooding.

One other thing the authors noted was that the leptospirosis patients were predominantly male. This has been shown also with previous reports, but it just could be due to the higher exposure of males to contaminated floodwater.

The ones who died were those who had themselves admitted when their leptospirosis were at an advanced stage already. Although they were also given antimicrobial therapy, some of them died of acute respiratory distress syndrome and acute kidney failure within only two days of admission to the hospital. So, once it reaches a certain threshold, a patient can rapidly deteriorate and die, which is also the case with COVID-19.

The World Health Organization recommends that doxycycline or other effective antimicrobial therapy be started before the fifth day of disease onset. If given later than this, patients may already advance to a complicated stage and die.

As if COVID-19 is not enough, leptospirosis adds to our list of concerns these days. Wading in floodwater is a reality that most of us have no choice but to face. It’s perfectly OK so long as we wash and soap our bodies thoroughly once we get home and take the prophylactic doxycycline as recommended. INQ