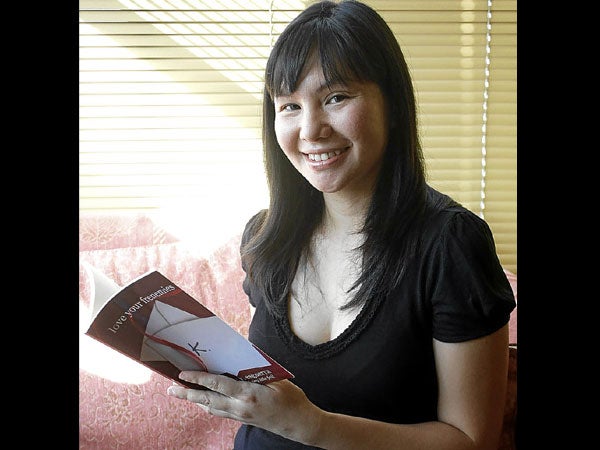 When Mina V. Esguerra was 11, she visited a friend’s house and was looking around when she noticed a book. Splashed across the cover was the tagline “Sweet Valley Twins,” marking the novel as part of the Sweet Valley franchise created by Francine Pascal. The series chronicles the adventures and misadventures of the teenage Wakefield twins: steady, serious Elizabeth and willful, popular Jessica.

“I asked if I could borrow it and discovered young adult novels for the first time,” Mina recalls. This was the moment when she began to take reading and writing to heart. That book would be her lodestone, leading her in the right direction.

She began typing her own stories on a manual typewriter, sometimes almost missing dinner because she would lose track of time. Her tales were of young romances and teenage heartbreak, and not surprisingly, were devoured by her classmates at Upsouth School in Paranaque. She started showing them her stories in sixth grade and these would get passed around.

Twenty years later, Mina’s stories have gotten a bit longer – she now writes books – and her readers wider. With two novels published by Summit Books and two others available through Amazon.com, she has become an unexpected success in international publishing.

Ma. Carmina V. Esguerra was born on October 30, 1979, the eldest of two daughters to Jimmy Esguerra, who ran his own construction company, and  wife Linda, a management consultant. “I was very nice,” Mina says of herself as a child. A voracious reader, she would bring a book during family gatherings, find herself a good spot and crack open the book instead of mingling.

After the Sweet Valley epiphany, reading progressed into writing.  Encouraged by her classmates, she learned to savor the creative process. “Everything I did afterwards was informed by that,” she says. This included taking up Communication at the Ateneo because, she says, she was being practical and didn’t want to take up only writing. In fact, she shied away from more writing in college and didn’t even join school publications.

“At that point I felt writing was something that I did as a hobby and that only my friends would read my stuff.   It felt like it would be too serious.” She still showed her stories to her friends though.

After graduating in 2000, she started working just as the Internet was turbocharging businesses everywhere. Mina worked as copy editor for a website, which she did very well, and has since been managing websites and editing  online. She began her current stint with the Asian Development Bank in 2006.

But she never lost that love for storytelling, and thanks to Summit Books – the book publishing arm of Summit Publications – she finally found a way to        indulge it. A first book she wrote wasn’t published, but the comments she got for it worked their way into her second manuscript, which was accepted for publication. “My Imaginary Ex” came out in 2009 and tells of Jasmine, who pretends to be Zack’s  ex-girlfriend at his request. As the years go by, the ruse becomes more trouble than it’s worth. Especially when Zack gets engaged.

She recalls: “When I was thinking of writing again, I thought about young adult novels because that was all I had ever written.” But when she again read YA novels on the shelves, she felt disconnected from the milleu they represented. “It was just a totally different experience and I felt that I couldn’t write it in a way that felt true. So I decided to write something older.” And this turned out to be chick lit.

The resulting novels chronicle the travails of young professional Filipino women trying to excel at their jobs while seeking out happiness or perhaps the man of their dreams.

While she’s read some foreign titles identified as chick lit – she’s read the Bridget Jones books, for example – that’s not where she’s coming from. “I’m basically writing from the Sweet Valley Twins perspective, but I try to make the characters older.” In effect, she has allowed her characters to grow up and face  the contemporary world of  up-and-coming Filipino women.

“I write about my friends,” she explains. “That’s because my life is boring compared to theirs.” When she submitted her first manuscript, which was based on her own life, the editor asked, where’s the drama?

Her friends had a lot of drama in their lives, she thought, as she extrapolated a plot from that,   “It’s more of how I wish they had dealt with the situation, rather than how it actually happened.”

In April, 2010, she unveiled “Fairy Tale Fail.” In the book, Ellie Manuel transforms her life into that of the perfect girl – but is that really what she wants?

Writing that novel took a bit longer this time, as Mina kept rewriting the draft. She also tried something different, having read that giant cyber-retailer Amazon.com was looking for manuscripts from international authors for their e-publishing endeavor, the Kindle. “I tried it as an experiment,” she says.

Mina submitted “Fairy Tale Fail,” which appeared on Amazon’s Kindle Store as an e-book for the enticing price of $0.99. “It’s been great,” she says. She describes as “amazing” the experience of having foreign readers, as compared to the predominantly local readers of “My Imaginary Ex.”

A paperback edition of “Fairy Tale Fail” is available for $7.99 in the US.  Mina orders some copies and sells them to interested local readers on her own.

The sales of her second novel began slowly, with orders at one point totalling about 20  a month. But after Christmas in 2010, sales even reached 20 books a day. Today, she has sold more than 4,000 copies of “Fairy Tale Fail.” She’s quite happy with the royalties, she says, especially since she did no marketing at all. “I don’t know how to do it,” she says.

She returned to Summit Books for her third novel, “No Strings Attached.” This time, the book centered on Carla, who is about to turn 30 and must decide if she wants the casual fling the title suggests or something more permanent.

Then it was back to  Amazon for  her fourth novel, “Love Your Frenemies.”

Mina’s characters occupy the same universe, as some of them appear in several of her books.  Kim, the protagonist in “Love Your Frenemies” was first cast in “My Imaginary Ex.”  It would be a shame not to use such rich characters, she says.

Meanwhile, her own story has moved forward.  In 2010, she married infotech manager Michael A.R. Co, also a writer, who has won a Fully Booked prize and authored the book “The God Equation and Other Stories.” They recently had their first child, daughter Elianna.

“Writing is what I do in my spare time,” says Mina who has taken the no-nanny route and takes care of her baby herself with a little help from her husband and her mom, who has flown in from Texas for this.  She telecommutes for her ADB job, but would love to be able to quit so she can be a full-time writer. “I think if I put in enough time and put out enough titles, I could turn this into something.”

Mina understands her genre very well and knows that some people may not take her seriously. “It’s been called shallow but I don’t think it’s necessarily me, but the genre. People expect chick lit to be fluffy and light at times, but I don’t really feel bad about it.  With the same word count, I can tackle darker stuff but I don’t because it’s really not in my personality.”

While some chick lit has been branded as formulaic, Mina escapes this trap by using a unique, detailed setting – the Philippines – and realistic, well fleshed out characters.

Where originally, “My Imaginary Ex” was kind of a secret project, the writer  has recently come out to promote her latest books, even attending an event, so people are starting to find out exactly who she is. They should. She has, after all, released four books in three years.  Now, she finds herself growing as a writer. “Things are starting to change,” Mina Esguerra admits. “I’m starting to think of myself as an author.” •