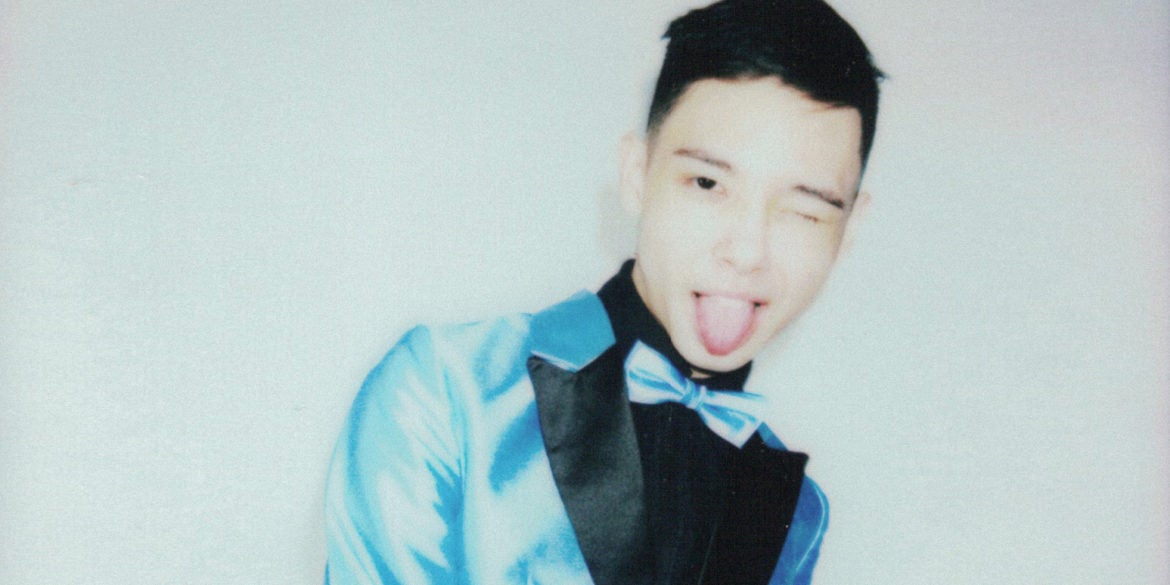 Three years after launching fashion brand OJK, Johan Kyle Ong, now 18 and fresh out of high school, has acquired a portfolio of bragging rights that few of his peers can match.

Johan’s signature hoodies and jackets have been worn by Iñigo Pascual on stage and Vice Ganda on TV, and in the occasional Nadine Lustre or Julia Barretto Insta-sighting.

Beyond the high-profile celebrity seals of fashion approval, Johan has been tireless in other interests and tangent lives, including filmmaking and a burgeoning pop stardom.

His song “Body Clock” featuring Krystal Brimner has inspired one of those most elusive of cultural currencies of the 2020’s—a TikTok dance challenge.

In this exclusive, Johan is interviewed by photographer Paolo Crodua, one of his closest collaborators since the two met in 2017.

Together, the designer and the photographer pioneered a bold, zoomer-millennial crossover aesthetic, one developed by a creative process of casting nonprofessional models transported to familiar settings, from an amusement park to a planetarium, but are somehow transformed into distinctive otherworlds. 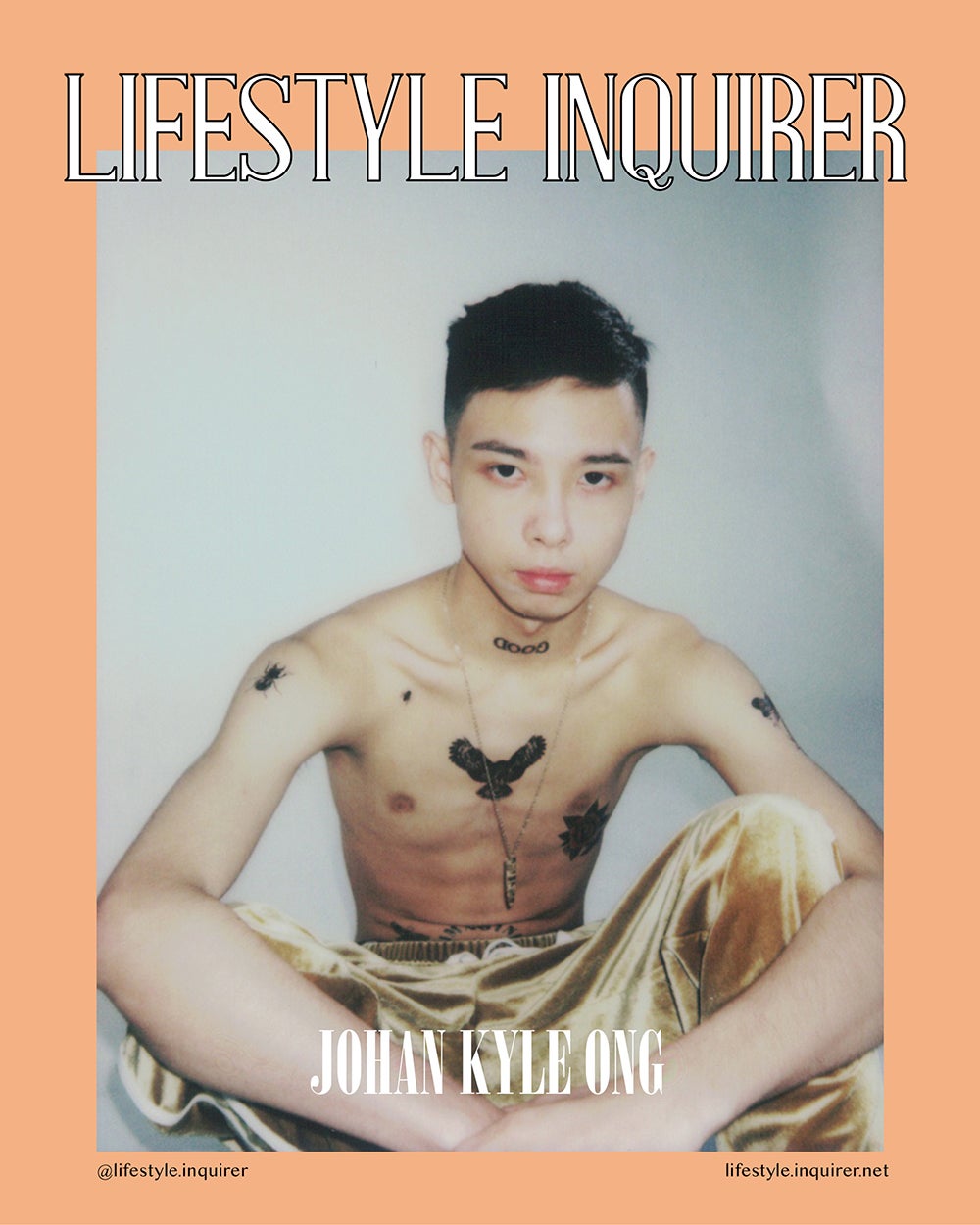 PAOLO CRODUA: Hey, so I know you just finished high school earlier this year, and you’ve decided to take a gap year before starting college. It’s not a very common thing here (taking a gap year), what made you decide to take one and how’s it like so far?

JOHAN KYLE ONG: I’ve never been a big fan of college, partly because networking, timing, experience, and luck are just as important in making it in the film industry. Don’t get me wrong, I’m looking forward to college education, but I’m in no rush.

It’s going great! I’m usually impulsive with my ideas, but quarantine has forced me to marinate in my thoughts. I feel that I’ve learned more about myself in isolation than in high school.

What are some of the things you recently learned about yourself? And what was your favorite subject in school?

I don’t think I can put into words what I learned about myself, or maybe I just want to keep them private for now. My favorite subject was English since I enjoyed public speaking and creative writing. I also wanted to master rhetoric.

I’ve only known you for three years and I remember meeting you when you just turned fifteen. I’ve seen some of your short films too. What made you interested in film at a young age and how did you deviate from that to making clothes for OJK?

I’ve always had a fascination for the arts and I felt that film was the amalgamation of everything I wanted. Wardrobe, sounds, visuals, writing, there are just so many things to consider. I believe my interests work hand-in-hand. OJK is a platform for me to try new things, reach more people, and sustain myself to continue my passion projects, be it film, music, or whatever comes my way.

You make music now and you’re also an influencer. Which one do you enjoy doing the most?

I still enjoy film the most, but to be honest, everything has started to blend together. Whether you’re writing a screenplay or a song, you’re still telling a story. Films have soundtracks, and sometimes the films I make are musicals. When I have a new song release, I have to direct the accompanying music video, which of course concerns design and wardrobe. I can go on forever, but in short, I get the chance to do a little bit of everything, and I like it that way.

Yeah, I totally get that. Let’s talk about social media. A particular video you made for a school project went viral on Twitter, and your following on Instagram is also constantly growing. How does this affect how you portray yourself online in general?

As my number of followers grew, I did start to feel a responsibility to be a good role model. The last thing I’d wanna do is abuse my influence by bringing out the worse in people. I think it’s a good thing, it taught me to be more sensitive with my words.

Did you have a lot of insecurities in high school? And do you still have them now?

I had a few but very bothersome insecurities. They’re less now, but there are still a few that affect me greatly. I faced a lot of neglect and bullying in elementary so I developed this need to constantly be validated, and I feel it’s gotten so ingrained in me that no matter how famous or successful I become, I’ll never feel I’m good enough. But that’s probably because validation isn’t what’s gonna solve my problems anyway, it’s self-contentment. So that’s what I’m working on.

What’s something you wish more people talked about?

I wish more young people would acknowledge how important the agricultural sector in the Philippines is, and remove the stigma behind it being a “lower-class” job. I also wish the country would help incentivize it more.

Who are your favorite icons and dream collaborators?

There are just too many names to say, I would love to work with everybody. Imagine the things you’d learn!

I’m just gonna ask you straight, do you want to be famous?

Yup. I want to reach as many people I can with my work, and I want to sustain myself by just being me.

What’s the most fun or memorable project you’ve done so far?

Probably the music video I did for my batch. I wanted to give my schoolmates something memorable to watch in the future. I also wanted to keep myself occupied with something I actually enjoyed while staying in school. It’s a good thing too since COVID all robbed our graduation ceremonies. The music video is all we have.

You hang out with 20-something artists a lot. How different is it from hanging out with your friends? And which environment do you prefer?

I usually hung around older batches in high school so it felt pretty much the same. I guess the difference was that adults were more sensitive and thoughtful with what they said, but not as fun and free-spirited as my peers.

I prefer hanging out with my high school friends, but when it’s work, I definitely prefer being with adults.

Apart from Instagram, you’re relatively active on Twitter. I’m sure you’re aware about the social justice movement that’s going on. Do you feel the pressure to be politically correct?

I don’t think it’s pressure to necessarily be politically correct, but rather to not make a mistake and be robbed of the opportunity to learn from it. There seems to be a fixation with cancelling people’s careers as opposed to teaching them how to be better.

What’s been the most challenging part of your career so far?

Probably balancing work and personal life. I feel like they should be two distinct things, but they’ve pretty much merged themselves together at this point.

I think it’s more interesting in general when people see a chunk of your personal life in my opinion, it makes you more relatable. I’m just not sure how healthy that is. What are you working on at the moment?

I’m working on the music videos for my upcoming songs.

Oh yeah, I saw that you’re casting people to be part of it on Instagram. Speaking of work, are you conscious about the type of content you consume? What are your thoughts on originality?

Yeah, generally I try to look only at things that inspire me. I don’t watch bad films for the sake of irony either. It’s just too difficult for me to waste two hours of my life.

I feel that originality is something we should all thrive for, but not necessarily an obligation. Many times, we’re just recycling ideas that we’re drawn to but presenting them in our own fresh way. There is a thin line between being inspired and ripping someone off.

I agree. What about your thoughts on the music industry here?

I’m relatively new to the music scene, so I can’t say much about the community. But just like fashion and film there’s a pool of great talent, kind hearts, and big egos. It’s very inspiring to be surrounded by people who love doing the same thing as you, but there is also that sense of competition since everyone is trying to succeed. I just try to surround myself with people who I naturally click with and just hope for the best.

You sound really wise for someone who’s relatively new.

I’m just comparing it to all the other communities I’ve been. People in music seem to be more disconnected from each other though, especially by genre and labels. At least in fashion everyone kinda talks to everyone. And even when they’re relatively successful, they always have something to complain about.

What’s the most valuable lesson you’ve learned in your career so far?

To always value relationships and your well-being above career.

What are your pet peeves?

I actually don’t know what my pet peeves are.

Nothing annoys you? LOL

No, I think it’s because many things annoy me and I just choose to not focus on them, to not waste time.

But I really get annoyed when people have bad taste in movies, because I feel like they’re missing out on so much. I want to help them but (taste) it’s something that needs to be cultivated through time, and it’s too much of a commitment.

But you like Borat? So, I’m not so sure I can rely on you for that.

Borat is an objectively great movie. I think you’re talking about Bruno, which I don’t like.

Right. Anything special we should look forward from you?

Okay, last question. With everything that’s going on right now, what do you think is your role as an artist and influencer?

As an artist, I don’t feel obligated to be anything. I feel that the best thing I can do is continue creating work that inspires me, and I can only hope that it does the same to the people who see it.