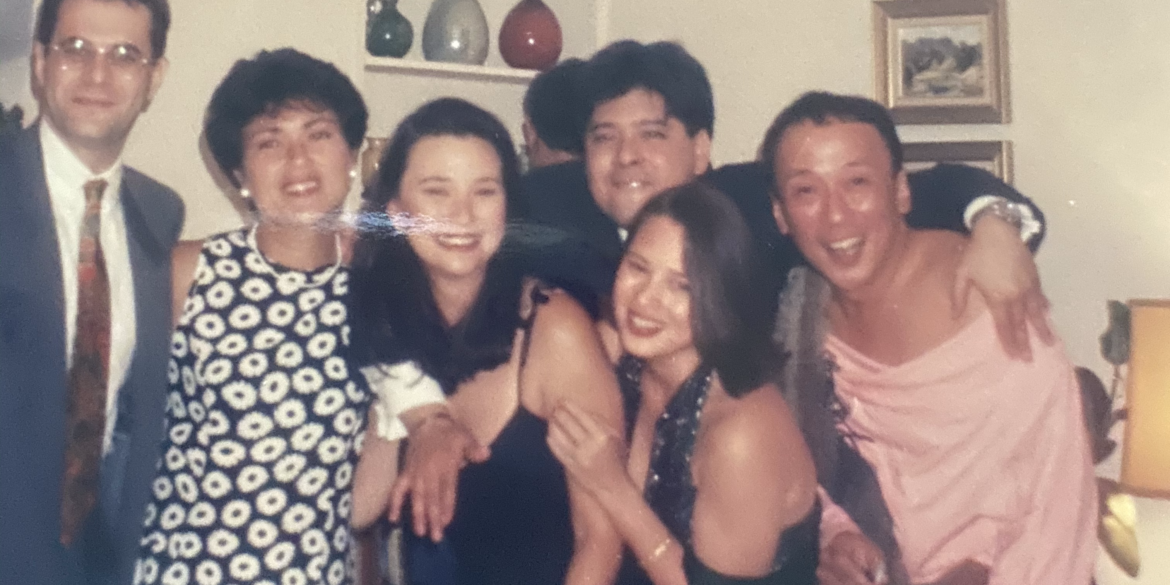 From the corner of my eye, I saw him. In the hushed solemnity of the Neo-Baroque interiors of San Sebastian Church, dwarfed by the vaulted ceilings and soaring columns, as I sat in front of the altar, I saw him sauntering in through the side to the very first pew, clad in his signature off-the-shoulder top. My first instinct was to shake my head and chuckle, and I would have, if it had not been the exact moment when I was promising, in the eyes of God and all the dearly beloved gathered here this evening, to love, honor, and cherish the man seated next to me.

Days before, I had begged him to wear a suit, if only not to shock my future in-laws, who might not have appreciated the flouting of the Barong Tagalog or suit and tie dress code. But then again, my former mother-in-law had opted to wear a rather riotously printed dress that fell below her knees and white—Oh my God—white shoes, even as I had informed my fiancé long in advance that my mother would be wearing a long gown and my father a tuxedo, so, really, who were they to pass judgement on the sartorial decisions of my wedding guests?

Just as no one puts Baby in a corner, no one straightjackets Louie Cruz. Ever.

In a year of unimagined sorrow, which began with the passing of my mother in January, the news of Louie Cruz finally succumbing to lung cancer after two years of countless chemotherapy sessions found me breaking out in howling sobs on the phone as Lorrie Reynoso was recounting to me his final hours. Later, both Maurice Arcache and I spoke, consoling each other through our tears.

Louie had been in my life since the mid ’80s, as both friend and family. You could say that our story was like a rom-com set in London.  You know the trope: boy takes girlfriend to meet his family, girlfriend falls in love with the older brother instead.  Except, in this case, the brother was 14 years older than the girl.  And gay.

Indeed, Louie was one of the enduring loves of my life, long after my relationship with his brother Monch had ended.

Louie was a legend even before I’d met him. I was still a teenager in Manila when he began throwing his infamous Halakhakan parties, which, in the waning years of the Marcos regime after the assassination of Ninoy Aquino, had a certain fall of Rome decadence to them. They were always themed parties, and each invitation was more scandalous than the previous one.

He was no different in London or Frankfurt, I would soon discover. He was living in Frankfurt with Eike, his partner at the time, when I went with my father on a business trip to Germany in 1988.  He had invited us to stay in his apartment, and I could see that he was itching to throw a party, but tried to restrain himself out of deference to my dad.

I was somewhat oblivious to the sudden flurry of activity, as I was then in the thick of a long-distance love affair with someone in San Francisco. I got off the phone with my beau and walked into a living room completely transformed by glitter and feather boas as Louie and his friends had gathered together all decked out in drag, Louie in his Orientalist fantasy get-up, looking like a China doll.  My father had a great time; later on, my mother would join him on these trips to Frankfurt and stay at Louie’s, loving the life-is-a-cabaret vibe.

Louie loved the nightlife. He was like a fairy godmother who sprinkled pixie dust and turned a bar or event into the place to be, bringing in the right mix of people, playing the right music, and creating the right ambience. He defined the nightlife of Manila again and again in so many ways, during many distinct eras.

In the early ’90s, he drove traffic back to Makati at night when he made Giraffe the ultimate hangout. I was living in Amman then, but often in Manila, and I would invariably end up in Giraffe every night.  He came up with these improbably and often outrageous gimmicks that somehow always worked. For AIDS Day in 1994, he enlisted me and a whole bunch of ladies, some older, some socialites, some models —Anna Francisco, Dindi Gallardo, Tweety de Leon, Cristina Valdes, Eva Abesamis, Melissa Lopez and Karen Cancio-Litré, to name a few—to be waitresses for a cause for one night only at Giraffe. We all wore black and donned aprons, took orders, served drinks, got hit on by the men who kept ordering and generously tipping, and in the end, we donated all our tips to the AIDS Foundation.  It was bloody tiring work, being on my feet and waitressing all night, but it was, as with all the ideas that sprung forth from Louie’s incredibly fertile mind, so much fun.

That, I think, was the magic of Louie, the mix of decadence and decorum. He was an incredibly loyal friend who showed up when you needed him most, and he was always honest. In fact, he had a way of deflecting his candor though his wit—and he was incomparably witty—so that you would laugh and belatedly only realize the truth of what he was saying. I’d walk into a party with him, and he’d suss it out quickly and say, “Hay naku, hindi ako mabubuntis dito” (oh no, I’m not going to get pregnant here) and walk out.

He came with Eike once to Hong Kong to stay with me when I was living there as a young bride. My then-husband was taking a nap and the bedroom door happened to be slightly ajar. “You know,” Louie said to me, “he has a nice ass. But you are fundamentally mismatched.”

And he was absolutely right, even if it took more than a decade for me to finally leave my marriage.

When my book Making Love in Spanish was published, I asked him to do the reading at the launch.  It was one thing to write a rather racy novel with descriptive passages of sexual couplings, but it was quite another to read it out loud. So Louie did it for me, and he did it with his usual élan, peppering the sentences with his own candid asides, such as “This lucky bitch, getting so much action!” and making everyone burst into laughter in the process.

This was the same person, after all, who threw me a sex-themed bridal shower before my wedding. That was where I discovered that there was such a thing as a willy-warmer!

A little over two years ago, I visited him in St. Luke’s after one of his first few bouts of chemotherapy. I was prepared to feel sad and tearful, expecting to see someone frail and fatalistic. But Louie was in fine form and looked amazing. If not for his bald head, I would never have thought he had cancer. And instead of me cheering him up, he was the one who had me in stitches. His oncologist’s name, he said, was Charity, and his nurse was called Eternity.  “And I’m Chastity,” he roared.

Life was not always La Cage aux Folles for Louie. He had no long-term partner in his last years, and he sometimes struggled to stave off loneliness. But he had so many friends who adored him, and his house was often filled with people who truly enjoyed being with him. Like his beloved mother Tita Lucy, he was a wonderful cook and host.

When his father, Ambassador J.V. Cruz passed away, I called him from Guam, where I was living at the time. “Bambina,” he said, “I’m a little orphan Annie now.”

I can’t help but feel a little orphaned now with Louie Cruz no longer in this world. But I can bet that wherever he may be, even the angels are making halakhakan with him.

The last of the great party icons

I plan my send-off–and the party after