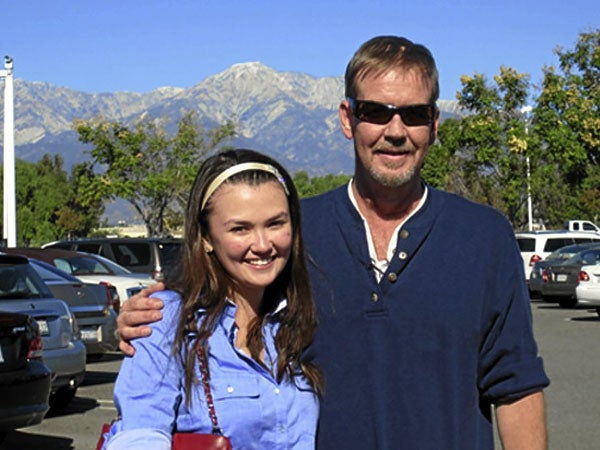 Father’s Day for many of us may be the same commercial holiday every year, marked by a dinner out, gifts for Dad, and some bonding activities.

Up until November last year, it was the most hated day of the year for actress Angelica Panganiban.

“I asked, why we should celebrate it and why can’t it be just a normal day. Why is everybody happy? I was so negative about it,” she recounts.

Along with other fatherless friends from school, the award-winning actress tried to make the most of the situation.  “We’d tell ourselves ‘why don’t we just party together because we don’t have fathers, anyway.’”

But everything changed late last year when she finally met her biological father in the United States. Panganiban says she now finds reason to consider this day special.

When boyfriend Derek Ramsay asked her to greet her father last Father’s Day, she resisted the idea. “I told him ‘Why would I do that? I don’t even have a father!’ Then I realized, I do have a father.”

Because she had not yet met her dad, she searched the Internet and found him.  Via social networking, she made contact. “I just sent him a message on Facebook,” she recalls.

Finding her biological father after learning that she was adopted was not part of her original plan, reveals Panganiban.

“I was satisfied with the family I grew up in and with how they raised me,” she explains. “But when I learned that my real mother had passed away, I thought that I might not have the chance to meet my real father as well. So I searched for him.” She asked her adoptive mother about the details of her adoption and trawled the Internet. Finally, she found him.

“When I saw his photo, I knew it was him!” she exclaims. “I felt shivers in my body. It really felt different and you just know you’re looking at someone related to you.”

The actress says she found the opportunity to finally meet her father, Mark Charlson from Iowa, last November, when her home network ABS-CBN gave her a week-long break from work.

“Initially, I requested that vacation because I wanted to surprise my cousin in Los Angeles on her 18th birthday. But that also became the perfect chance for me to meet my dad,” Panganiban recounts.

A US-based aunt coordinated the meeting. Father and daughter agreed to meet in LA, she tells Sunday Inquirer Magazine.

It was a very emotional moment when they finally met, Panganiban shares. “The moment I saw him on the escalator on his way down, I was already in tears. And when we finally met, I couldn’t say a word.”

And when she could finally muster a word, she only managed to say “Hi” to her father. To which the man replied, “You are so tiny,” Panganiban recalls.

Charlson brought his daughter to Iowa, where he showed her where he lives. He introduced her to her aunt, grandparents and half-siblings in Iowa, the actress recounts. She also bonded with her father’s fiancée and the woman’s nephew.

But Panganiban’s fondest memory of their reunion was when they spent time cooking together. “I got my love for cooking from him,” she declares. “I helped out in the kitchen even if he didn’t want me to do anything. It was his moment to serve me, but I couldn’t stop myself from doing kitchen work,” she recalls.

Her father served tacos. “It was very delicious, I went back for several more,” she recounts, her eyes widening in glee. “He also prepared the best spaghetti I’ve ever tasted.”

Her family in the US was surprised to see her feast on the pasta, as she usually ate very little.  “They thought I was only trying to impress my dad by enjoying the dish, but really, it was very delicious. I may not have a voracious appetite, but he really tickled my taste buds!”

Panganiban, who is once again busy with acting projects, hopes to share more time with her father. Miles away from him, Panganiban daydreams of them  spending Christmas together. “Anywhere, whether here or in the US, as long as we can celebrate Christmas together, even if only once in our lives.”

She also wants Charlson to fly to Manila to see the world she lives in. “I want him to see how I work, how tapings go, the long nights, how happy these programs are. I want him to meet Derek as well as Derek’s family.”

But that would have to wait for now. Panganiban  is hoping for another break from work next year so she can  fly to the US to see her father again.

For now, the actress wants to savor Father’s Day with fond memories of her first moments with her dad.  Like most of her friends, she is also planning to send him a card with the message “‘Happy Father’s Day’… in all capitals!” she says with a hearty laugh.