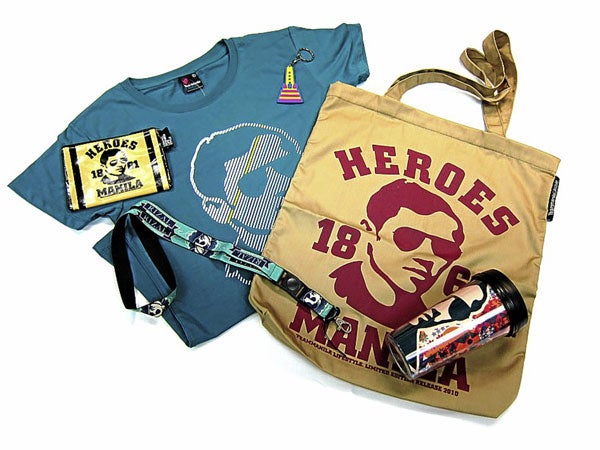 Is it possible to breathe new life into a 150-year-old, making him hip and young again?

Apparently, as some of the country’s retailers have realized to their delight, as all kinds of products that feature Jose Rizal have been flying off the shelves in time for the National Hero’s 150th birth anniversary today.

Hope Tang, vice president for merchandising of Robinsons Department Store, is particularly impressed by the sale of Rizal-inspired shirts and accessories of homegrown brand Team Manila.

Team Manila was catapulted into success by its cotton shirt featuring that most familiar image of Rizal wearing aviator sunglasses on postcards and old currency.

Since then, Rizal has become a familiar sight among the young and the young at heart. He has also become Team Manila’s primary brand image.

As Tang says, Team Manila has been in stores for less than a year but Robinsons’ diverse market has warmly accepted the proudly Filipino brand.

“Acceptance by shoppers – especially the young and artistic – has been remarkable,” says Tang in an email interview. “The functional nationalism-inspired merchandise is also a favorite among balikbayans and tourists.”

Aside from the Team Manila merchandise, Tang says that Robinsons’ Philippine Craft section also carries shirts that feature Rizal – all in celebration of his momentous birth anniversary.

National Book Store, on the other hand, has set up a special display of Rizal-themed books that will run until June 30. The display features 14 titles from Anvil Publishing.  Anvil has also partnered with the Philippine Daily Inquirer for an essay writing contest on Rizal.

Anvil marketing manager Gwenn Galvez says the company is publishing the  Rizal books  because it believes that Rizal’s writings are still effective in instilling a sense of values among young people.

“The celebration of his 150th is an opportunity to recast Rizal as a 21st century icon, because his writings are as relevant today as they were more than a century ago,” Galvez explains.

The new titles include “Rizal: Makata” by National Artist for literature Virgilio Almario, and “The Anvil Rizal Reader,” a collection of essays, poetry and drawings by a diverse group of personalities who see the book  as a way of giving tribute to Rizal and what he stands for.  Galvez says  Rizal, being the country’s National Hero, will always have a market among Filipinos.

“Books by and on Rizal will have a steady market in schools because of the Rizal course in college and the study of his novels in Philippine literature in high school,” she notes.

Rizal likewise has a special place in the heart of the Yuchengco Museum, which is mounting an exhibit titled “Rizalizing the Future,” to mark the hero’s 150th birthday and present Rizal in a more relevant and popular way to the young and the general public.

“This exhibit celebrates not only the 150th birth anniversary of Jose Rizal but  also the 100th year anniversary of the Yuchengco Group of Companies, says  Yuchengco Museum curator Jeannie Javelosa. “The YGC has produced some Rizal items and give-aways but these are not really for sale .The items on exhibit include pop merchandise from Team Manila, and we asked them to sell their more iconic pieces during the exhibit. There are also a number of Rizaliana books from Anvil and Vibal Publishing.”

Adds Javelosa:  “There is also a special blend of Rizal coffee from ECHOstore and the Philippine Coffee Board (PCB) in honor of Rizal who planted 16 hectares of coffee while he was exiled in Dapitan. The traditional Maria Clara jewelry of the 19th century Ilustrado class, made by a community in  Camarines Norte using gold and silver in the traditional style are also for sale.”

PCB director Pacita U. Juan says that the coffee blend was developed in honor of Rizal, the  coffee farmer.

“The specially designed coffee bags are of course the best way to show  our respect for the man,” Juan says, “We believe that Rizal can be a model for the youth of today. He had the strength of character and the ability with words that the youth can emulate.”

Sales have been encouraging so far, with museum visitors eagerly buying the items as tokens and souvenirs of the 150th year celebration.

As far as sales go, Juan says they have been a pleasant surprise.

“Surprisingly, younger people are taking to the Rizal items. He really is becoming a pop icon,” she notes.

Hopefully, that popularity will sustain the hero’s memory and historic place even after the 150th year celebration is over.