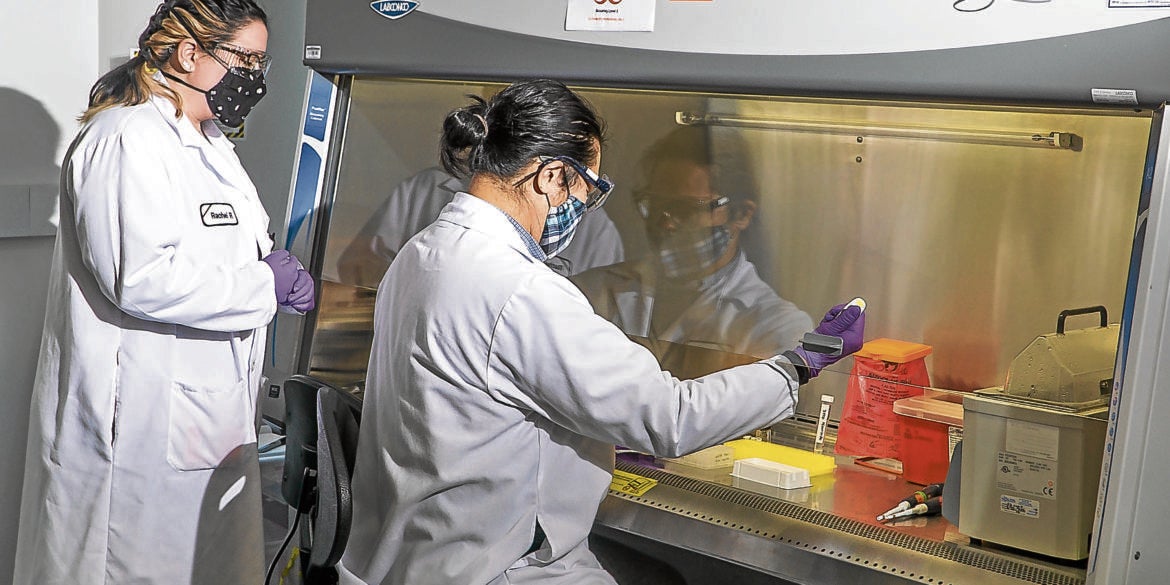 InterVenn scientists go over some samples sent to the company’s Bay Area lab.

Clinical trials are being conducted at PGH, NKTI and The Medical City

What if a simple blood extraction can detect with up to 94-percent accuracy if you have early-stage ovarian cancer? What if the same test enables clinicians to distinguish benign from malignant masses in women presenting with pelvic masses?

A Filipino-run biotech company combined glycoproteomics with augmented intelligence (AI) to come up with the long-overdue ovarian cancer detection tool.

Ovarian cancer is one of the deadliest cancers of women worldwide, as most are detected only at stage 3 or 4, when survival rates go down to 20 to 30 percent. Unlike, say, breast cancer, where a breast self-examination can alert a woman of unusual growth, the ovaries are tucked inside the reproductive organs where women cannot “feel” for any bumps. By the time symptoms present, it will be past the early stages of cancer.

To wit, glycoproteomics identifies, catalogs and characterizes proteins. The human body is made of proteins modified for specific functions; the most common modification is short-sugar chains called glycans. Patients with cancer have altered structures of the glycans—alterations that are measurable and structurally characterized.

“The task was understanding the chemical composition of these proteins and how it tracks with the disease. So the implications of this science go into the diagnosis, treatment monitoring, treatment selection,” said Aldo Carrascoso, the Filipino CEO and founder of InterVenn Biosciences.

InterVenn Biosciences, founded in 2016 by Carrascoso, Dr. Carlito Lebrilla and Dr. Carolyn Bertozzi, aims to find solutions for the most challenging health problems.

Lebrilla is a Filipino considered a pioneer in translational glycoproteomics and mass spectrometry, and their application to complex diseases. Bertozzi is an American chemist known for founding a new field of chemistry called bioorthogonal chemistry. Carrascoso is the software engineer who wrote and developed the AI for Lebrilla and Bertozzi’s glycoproteomics study.

Carrascoso’s mother succumbed to breast cancer in the ’90s. “I almost became a physician, then someone told me, you just need to enable physicians.”

In 2016, a close relative was diagnosed with stage 2 breast cancer. Just this year, another close cousin died from the wrong treatment of triple-negative breast cancer.

“InterVenn Biosciences is no longer a business for me,” he said. “I cannot fail this. Responsibility na ’to. So everyone who joins us is in the same wave. When someone tells you that they’re going to take a genetic test to figure out if they have cancer, the test is not going to tell you if you have cancer. It will only tell you the probability of yourself having cancer. So basically, tatakutin ka lang,” Carrascoso said.

The glycans, he continued, sometimes determine the difference between ovarian cancer and Alzheimer’s. Glycoproteomics can tell if the disease is progressing linearly. “We are a trailblazer. Meron nga kaming challenge, we’re the only company that can do what we do.”

Carrascoso, a psychology graduate of Ateneo de Manila University, calls himself a divergent thinker. “There’s something I’m doing right now which people think is crazy—I eat once a day. In 2016, the winner of the Nobel Prize was a Japanese doctor who specialized in autophagy, the process by which cells destroy and recycle their own components. Physically, your cells, when they have nothing else to eat, will eat the bad cells. So I’m like, sh*t, gagawin ko. So tatlong taon na akong ganito, and I feel great.”

It took him a year to raise funds for his company because nobody believed him, and everyone thought it was too good to be true. So his company published numerous peer-reviewed journals, generating data one after the other. To date, InterVenn has already raised $34 million to develop precision medicine further and commercialize diagnostic ovarian cancer. InterVenn also received an institutional investment of $9.4 million in 2018.

InterVenn’s initial study, Vocal (InterVenn Ovarian CAncer Liquid biopsy), a clinical decision-making tool for ovarian cancer to distinguish malignant pelvic tumors from benign ones, has recently opened its Philippine branch and is currently looking for patients to join its international clinical trial. Clinical trials in the country are being conducted at Philippine General Hospital (PGH), National Kidney and Transplant Institute (NKTI) and The Medical City. Patients interested in enrolling in InterVenn’s Vocal program can visit vocal.ph for details.

“We’re enrolling a few thousand people, and the preliminary results, the accuracy is 93-94 percent. Again, unprecedented. And we expect the Vocal test to be available early next year,” Carrascoso said. —CONTRIBUTED