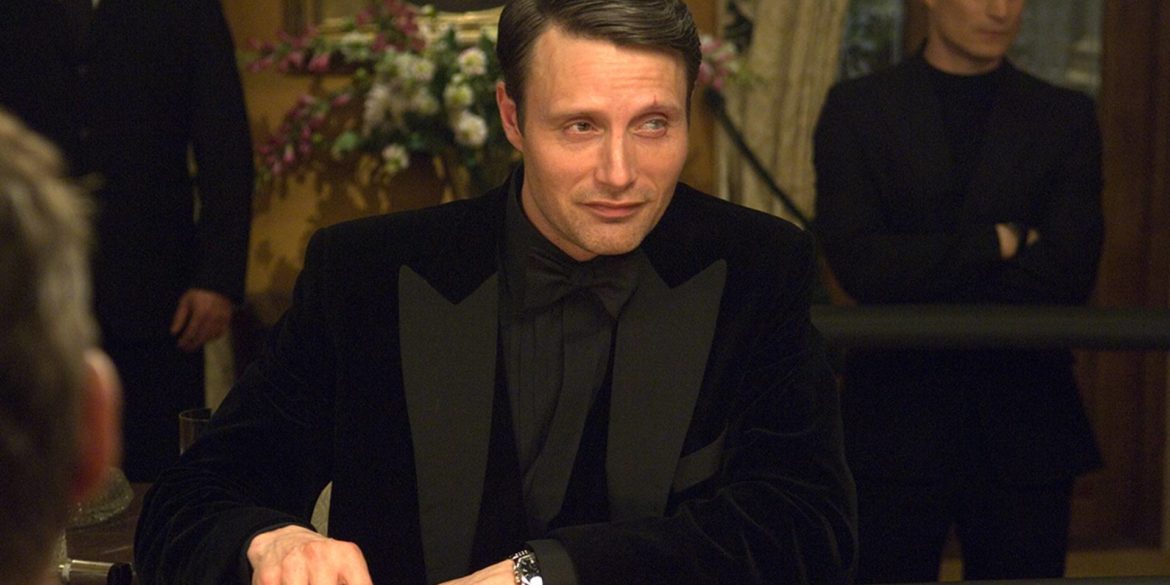 I once heard or read somewhere that two kinds of men wear a black shirt with a black suit: magicians and mafia dons. I hope I’m remembering it correctly. Or was it a black shirt and a black tie? And vampires? Anyway, you get the general profile.

So unless you intend to pull out a rabbit from your top hat or go around making offers people can’t refuse, you’re supposed to stay away from this combination. But what if you can actually pull it off? I don’t know if it proves the point precisely, but take for example Le Chiffre, the bad guy played by Mads Mikkelsen in Casino Royale.

Mikkelsen said this about playing Le Chiffre: “Every Bond villain has three nipples or something. For Casino Royale I had to wear a milk-coloured, glazed-over contact lens. We tried a billion ways to make it bleed but they went with CGI in the end. I’ve now done six films where there’s been something wrong with my eye. It’s the easiest way to make someone a bad guy.”

Is that the secret key accessory to pulling off the black-on-black look? How far along the timeline of human civilization are we from Hermes cataracts? Maybe we don’t have to go that far. Maybe a decorative inhaler will do. Check out these rhinestone-embellished ones on Asthma.net.

I digress. Let’s parse two Le Chiffre looks in Casino Royale: first, the suit he wears to meet the Lord’s Resistance Army commander in Uganda and, second, the poker tux.

The Uganda suit (as it were, his entrance outfit) isn’t black-on-black but indeed another iteration of dark monochromatic styling. On screen it doesn’t look brown, maybe because of the film’s color-grading, but production photos seem to reveal so. Here’s where the nuances come in. How do you wear brown on brown on brown?

Le Chiffre wears a brown suit, the shade of which you might call a dark taupe, closer to an implaceable moldy brown than the toasted dessert sand brown that Bond himself wears in Spectre. Le Chiffre’s shirt is more overtly chocolate. Maybe you can say espresso, depending on your coffee grounds of choice. (Bond Suits identify the shirt as aubergine.) Finally, his tie is closer to the hue of his suit, with a barely perceptible print on it.

It works because the shirt is tonally lighter than the suit and tie, but not too light. Imagine if he was wearing a lighter tan, he’ll look like tiramisu. Yummy, but not what I ordered. You can think of it this way: If you dim the lights and it almost looks black, you’re probably doing it right.

Production photos of the poker tux also reveal some details that are not immediately noticeable in the movie, like the fact that it’s velvet. Le Chiffre could’ve worn a white shirt like Vito Corleone, but no, not our Scandi baddie. It has to be black-on-black for a terrorist banker.

While the suit is velvet, you’ll notice that his lapels, shirt, and bowtie are a flatter shade of black that reflects light differently because of the fabric. The style lesson here: What the contrast in colors lacks, the contrast in textures more than makes up for.

See, you don’t have to be a movie villain or half-blind to pull it off.