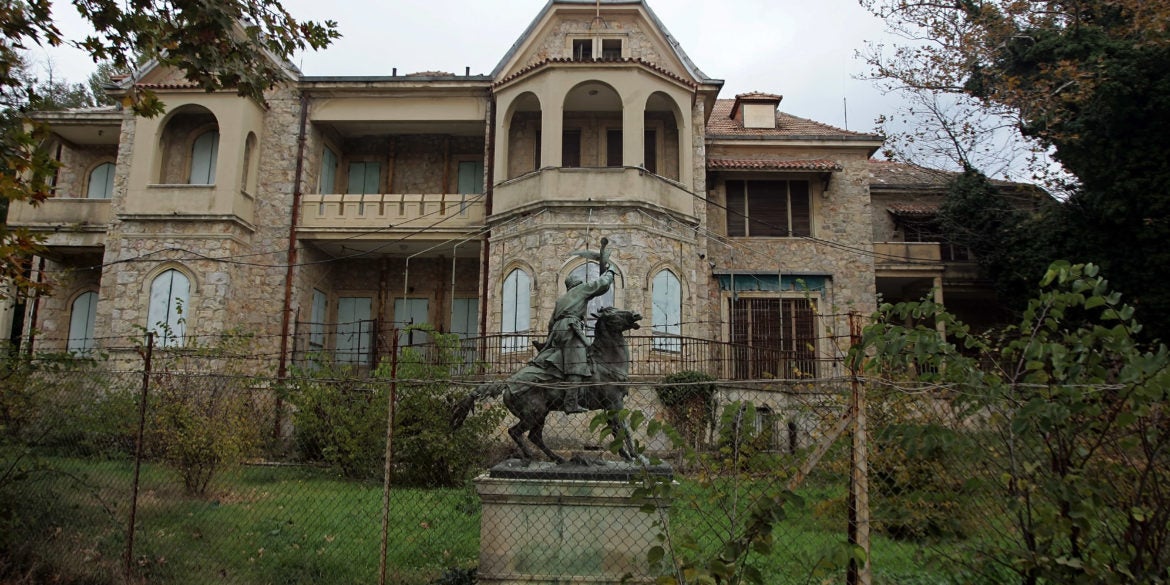 A file photo showing a general view of the old royal family estate in Tatoi, outside Athens, taken 14 November 2005. Hundreds of items belonging to the former royals were found stored inside boxes in a stable and the main residence basement. AFP PHOTO LOUISA GOULIAMAKI/FILES (Photo by LOUISA GOULIAMAKI / AFP)

Greece’s conservative government has announced plans to reopen a former royal estate outside Athens for eco-friendly visits and a possible springboard for a range of farming products.

The Tatoi estate served as the home for the Greek royals for decades but was abandoned in 1967 when the country was taken over by a military junta.

The rustic 4.2-hectare (10-acre) estate now lies abandoned, its 55 buildings in disrepair, some barely standing after being repeatedly looted.

“This site is closely linked to our modern history,” historian Costas Stamatopoulos, an expert on the Greek royal family, told state TV ERT on Friday.

“Finally, the state has decided to take it seriously.”

Government spokesman Christos Tarantilis said on Thursday the plan included the revival of a “historic brand” of agricultural products sold decades ago at the Tatoi estate, some 20 kilometres (12 miles) northwest of the Greek capital.

“We want (Tatoi) to become an attractive year-round destination for all ages through sustainable and environment-friendly infrastructure and activities,” Culture Minister Lina Mendoni said this week.

The government expects to conclude studies next year and then seek investment from private sources.

Tatoi in its heyday welcomed the cream of European royalty.

Originally purchased in 1872 by King George I of Greece, the estate fell on hard times when its last owners abandoned it in 1967 shortly after a group of army officers took control of government.

The estate was seized by the junta in 1973 along with other properties, sparking a legal dispute that was only resolved in 2002 when the European Court of Human Rights ordered the Greek state to pay 13.2 million euros ($16 million) to the former royal family.

The Greeks voted to abolish the monarchy in 1974 in a referendum held shortly after the democracy was restored.

In 1991, the former royal family was permitted to remove a number of items in  containers during the administration of Constantine Mitsotakis, the father of the current prime minister.

Many members of the former royal family are buried on the grounds, including eight kings and queens.

A dozen royal carriages were found in an estate stable last year.

A previous conservative government in 2007 had also announced plans to turn the estate into a park and build a museum on the site.