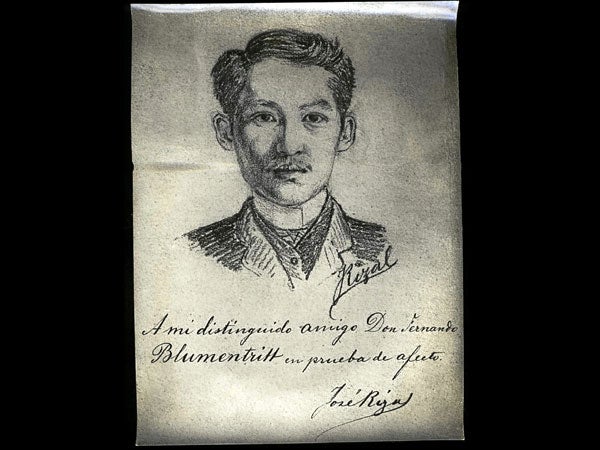 Generations of college students reared on the standard Rizal textbook by Gregorio Zaide were introduced to the so-called “Rizal A to Z” that depicted the many facets of this hero’s personality. Students either used Zaide’s list or created their own based on their readings: A for Agronomist, B for Businessman, C for Cartographer, M for Magician, all the way to Z for Zoologist.

A century and a half since Rizal was born, with so much material both old and new, we can compose many more Rizal A to Zs like the one that follows:

A: ADIOS, AGUINALDO, ATENEO. “Adios patria adorada,” is the first line of the unsigned, untitled, valedictory poem he wrote on a slip of paper, folded neatly and hid in an alcohol burner recovered by his sisters after his execution. The poem was copied out and reproduced, and given the title “Mi Ultimo Pensamiento” and much later, “Ultimo Adios.”

Ateneo Municipal was a public secondary school in Intramuros run by the Jesuits that later developed into the present-day Ateneo de Manila University.

B: BLUMENTRITT, BURGOS, BAGUMBAYAN, BONIFACIO. Blumentritt is more than a street name in downtown Manila.  Ferdinand B. was Rizal’s friend who campaigned for Philippine independence against Spain and the United States.

Jose Burgos was one of the three priests martyred in 1872, hence Gomburza for Gomez, Burgos, and Zamora, whose influence was transmitted to Rizal via his brother Paciano.

Bagumbayan (New Field) was where Gomburza and Rizal were executed. It is now known as either Luneta or Rizal Park.

Andres Bonifacio read Rizal’s writings and was said to have translated the “Ultimo Adios” from the original Spanish to Tagalog.

C: CALAMBA, Laguna.  The town where Rizal was born  between 11:30 to midnight on June 19, 1861. In the Chinese zodiac, he was a Rooster, and fell under the astrological sign Gemini.

E: ELIAS. Character in “Noli Me Tangere” often interpreted to be Andres Bonifacio, although in 1887, Rizal and Bonifacio had not met. Rizal is said to have regretted killing Elias in the “Noli.”

F: FAURA, FILIBUSTERISMO, FRANCISCO  Mercado. Federico Faura was the founder of the Manila Observatory and inventor of the Faura barometer that provided warnings on typhoons. He is best remembered for the Ermita Street that bears his name, Padre Faura.

“El Filibusterismo,” the third of Rizal’s three books, was published in Ghent, Belgium in 1891, the sequel to  “Noli Me Tangere.”

Francisco Mercado, the father of Jose Rizal, was an educated  farmer from  Biñan, Laguna. He married Teodora Alonso in 1848 and had 11 children, Jose being the seventh child and one of two sons. Mercado petitioned the court to change the family surname to Rizal in 1850.

G: GERTRUDE Beckett was the daughter of Rizal’s landlord in London. She fell for Rizal. In her letters, her pet name was “Gettie” and she called Rizal “Pettie.”

H: HEIDELBERG, HITLER. Heidelberg is the university town where Rizal took specialized courses in ophthalmology under Otto Becker. One of his famous poems, “To the Flowers of Heidelberg,” was composed here.

One of the enduring urban legends of the Philippines is that Rizal sired Nazi leader Adolf Hitler with one of his women while in Europe.

I:  INDOLENCE of the Filipino.  One of Rizal’s famous essays in response to the myth of the lazy native spread by the Spanish colonizers.

K: “Sa aking mga KABABATA” was a poem on the beauty of Tagalog, said to have been written when Rizal was 8.  Each August, during Buwan ng Wika, a line from this poem is recited and goes:  “Ang hindi magmahal sa sariling salita, masahol pa sa hayop at malansang isda  (He who does not value his native tongue is worse than a beast or a rotten fish)” At best, this poem is attributed to Rizal; at worst it may not have been written by him  at all.

L: LAND SURVEYOR, LEONOR, LOTTERY. Not many know that a year after his graduation from the Ateneo in 1877, Rizal graduated again, this time with a degree in land surveying. He attained his professional license as a surveyor in 1881.

Rizal was once described as “Doble Leonor” because while a student in the Ateneo, he was associated with two women: Leonor Rivera and Leonor Valenzuela.

The Rizal family was fond of the lottery and Rizal actually hit the second prize while he was an exile in Dapitan. Unfortunately, Rizal did not buy the entire ticket, thus the prize was divided between him, the Governor of Dapitan and a third party whose name is lost to history.

M: MAKAMISA, MORGA. In 1892 Rizal wrote the beginnings of a satirical novel in Tagalog. The opening chapter was called “Makamisa”  (After the mass). Later he shifted from Tagalog to Spanish and after writing up 245 pages in draft, left this novel unfinished.

Antonio de Morga in 1609 published the “Sucesos de las Islas Filipinas (Events of the Philippine islands),” a book that Rizal re-published with long explanatory footnotes in Paris in 1890.

N: NOLI ME TANGERE, NELLIE BOUSTEAD. “Noli Me Tangere (Touch me not)” was Rizal’s first book, the first of two novels that first saw print in Berlin in 1887.

Nellie Boustead (sometimes spelled Nelly) was the woman who caused the love-sick Antonio Luna to challenge Rizal to a duel.

O: Rizal specialized in OPHTHALMOLOGY after his medical studies in Madrid, to cure his mother’s failing eyesight. He studied under Louis de Wecker in Paris and Otto Becker in Heidelberg.

P: PACIANO, PASTELLS. Paciano Mercado was Rizal’s elder brother, who inspired and guided his life and career. He translated the “Noli” into Tagalog. He fought the Spanish during the Philippine Revolution and became a general during the Filipino-American War.

Pablo Pastells was the Jesuit superior with whom Rizal corresponded from Dapitan on religious and philosophical issues.

Q: QUIROGA, QUIOPQUIAP. Quiroga is a character in “El Filibusterismo” while  Quiopquiap was the pseudonym of Pablo Feced, a journalist known for his anti-Filipino writings.

R: REDNAXELA, RICIAL, RIPPER. Rednaxela is Alexander spelled backwards and was the name of the street, Rednaxela Terrace, where Rizal lived in Hong Kong.

Ricial, Risal or later Rizal was a word that denoted a green field ready for harvest. Mercado and Rizal were two surnames Rizal used interchangeably during his schooling in the Ateneo and the University of Santo Tomas.

Another urban legend about Rizal has it that the hero could have been the infamous Jack the Ripper because he was in London at the time the Ripper murders took place. It has also been suggested that there is a connection between their initials “J.R.”

S: SANDAKAN, SEGUNDA, SOLIDARIDAD. Rizal proposed to establish a Filipino colony in Sandakan, North Borneo, but that did not push through.

Segunda Katigbak was Rizal’s first love, as depicted in his student diary.

“La Solidaridad” was the Filipino newspaper in Spain edited by Graciano Lopez Jaena and later, Marcelo H. del Pilar, where Rizal submitted some of his most famous essays: “To the Women of Malolos,” “Indolence of the Filipino” and “The Philippines Within a Century.”

Tetcho Suehiro was a Japanese journalist whom Rizal met on a ship bound for the United States. Tetcho later wrote about this meeting in “The Man from Manila.”

Usui Seiko was a Japanese woman whom Rizal fell in love with. She is mentioned in his Japan diary.

V: VALENTIN VENTURA, VERTEBRA. Valentin Ventura was a wealthy friend from Pampanga who lived in Paris and advanced the funds to defray the costs for   the publication of “El Filibusterismo.”

Part of Rizal’s vertebra or backbone is displayed in Fort Santiago. When Rizal’s remains were buried under the Rizal monument, this chipped piece of bone was preserved to show where the bullet hit him.

W: WOMEN of Malolos. Rizal wrote a letter to the women of Malolos who, against friar objections, proposed a night school where they could learn Spanish instead of the customary and purely religious teachings.

X: XEREZ-BURGOS. Manuel Xerez Burgos, nephew of the ill-fated Fr. Jose Burgos, interceded for Rizal who was not admitted into the Ateneo Municipal due to his small stature.

Y: Ysagani, Ybarra, Yndios Bravos. In Spanish orthography the letters “I” and “Y” are sometimes interchangeable, which explains the spelling of Rizal’s  characters Ybarra/Ibarra and Ysagani/Isagani in “El Fili.”

The same goes for a group of friends that called themselves Los Yndios/Indios Bravos after the “brave Indians” they saw performing in a Wild West show in Paris. “Indio” was a negative word used to describe native Filipinos. Rizal and friends turned it around and made it a badge of courage.

Z:  ZOOLOGIST, BEN ZAYB. During his Dapitan exile, Rizal collected specimens: sea shells, butterflies, flora, fauna, and other artifacts that he sent to scientists in Europe. Which explains why  Rizal’s name appears in the classification for a winged lizard (dracorizali), a frog or toad (rachophorusrizali) and a bug or beetle (apogoniarizali).

Ben Zayb is a character in “El Filibusterismo” whose name is said to have come from Ybanez.