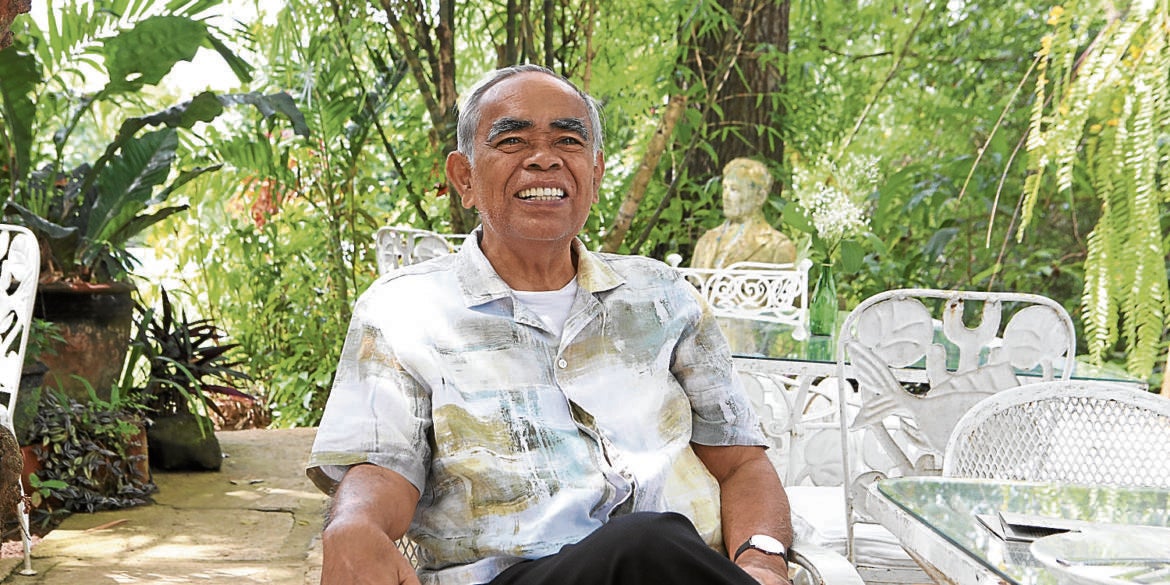 A plantito I am not.

I can tell a guava from a mango tree, but that’s about it.

People start talking about hydrangeas, philodendrons and bromeliads and my eyes glaze over.

Like many urban Filipinos adapted to the concrete jungle most of us call home, I’ve become alienated from the natural world.

But even I can feel the subtle changes in mood, stress levels and, yes, consciousness when I’m surrounded by greenery.

“Instinctively aware of the aesthetic vibrations of plants, which are spiritually satisfying, human beings are happiest and most comfortable when living with flora.” Words from a long-ago bestseller that inspired a long-ago hit album. (“The Secret Life of Plants” by Peter Tompkins and Christopher Bird)

“It’s a part of my philosophy: art and nature heal,” says the visionary founder of the Pinto Art Museum in Antipolo City, a favored destination for art lovers, day-trippers and, more recently, hordes of newly minted plantitos and plantitas produced by the prolonged quarantine Filipinos have had to endure.

As a child growing up in Ilocos Norte, he recalls, he was placed in charge of the family garden.

“Taking care of plants is ingrained in me, so every time I build a house, it’s essential to have a garden,” says Cuanang. “Long before people started talking about the healing power of nature, it was already second nature to me.”

Under the umbrella of the El Refugio Arts and Sciences Foundation, the sprawling compound now houses the Pinto Art Museum, a leading venue for exhibiting the best contemporary Filipino artists; the Pinto Museum of Indigenous Art, a showcase for the doctor’s extensive collection of cultural artifacts; and the Pinto Academy of Arts and Sciences, a learning center devoted to the convergence of science and the humanities.

The latest addition is the Pinto Arboretum of Philippine Plants, nearly a hectare of lovingly curated and cultivated green space that Cuanang describes as “a rescue center for endangered indigenous Philippine plants and trees.”

“My interest in putting up Pinto was really to combine art, culture and ecology,” he says.

“That was part of the plan from the beginning. When we built the museum, my first rule was: no cutting of trees. That’s why the steps and paths twist this way and that.

“Rule number two was: Respect the terrain. If you see a rock, don’t move it—it’s been here much longer than us. That was the ethos that we followed.”

Designed with artist Antonio Leaño, the manmade structures within the compound seem to emerge organically from the residual secondary growth forest, which was the original state of the property when Cuanang first saw it in the early 1970s.

Here and there stand tall and stately antipolo trees, after which the city is named. Pride of place belongs to an ancient clump of bamboo, centrally situated, that is several generations old.

“The Philippines has the highest biodiversity in the world, and we’re losing it to kaingin, industrialization,” says Cuanang.

The Arboretum is his stake in stemming that particular tide, a private nature preserve.

As “The Secret Life of Plants” states:

“Evidence now supports the vision of the poet and the philosopher that plants are living, breathing, communicating creatures, endowed with personality and the attributes of soul. It is only we, in our blindness, who have insisted on considering them automata. Most extraordinary, it now appears that plants may be ready, willing and able to cooperate with humanity in the Herculean job of turning this planet back into a garden from the squalor and corruption of what England’s pioneer ecologist William Cobbett would have called a ‘wen’.”

Helping the doctor develop the Arboretum is visual artist and avid ecologist Ronald Achacoso, who serves as its curator and chief tree-herder.

A graduate of the University of the Philippines (UP) College of Fine Arts, Achacoso belongs to the generation of contemporary Filipino artists influenced by Roberto Chabet.

But he was equally inspired by Leonard Co, UP’s pioneering botanist, with whom he would often go on field research to study indigenous plants.

(Co was killed by the members of the Philippine military while on a field expedition in Leyte in 2010, an apparent victim of “red-tagging.”)

Achacoso sees his work on the Arboretum as a fusion of his art practice and his botanical explorations.

He takes what he has learned from both mentors as a guide in cultivating and curating the Arboretum.

“I liken it to creating an artwork,” he says. “It’s about environment, evolution and ecology. Environment as the canvas, evolution as the process, and ecology as the synthesis.”

In a way, the arboretum is like an installation—a living, evolving, open-ended artwork.

“It’s not enough to go green,” he adds. “You have to go Philippine green.”

Indigenous plants and ecosystems have a distinct character, he says, which the Arboretum tries to preserve. He has gone as far afield as the Cordilleras and Lake Lanao in search of specimens for the garden.

To simulate rainforest conditions, the Arboretum relies on an overhead misting system, which delivers water from a natural spring on the property. The water eventually seeps back to the spring—an elegant, sustainable solution.

Once Achacoso gets into a serious taxonomical train of thought, you just have to hold on as he points out the various “exotic” plant species and enumerates their distinctive characteristics: a pitcher plant that lives on insects, another that shelters them; here a vertical garden with over a hundred species of limnophytes, there a balete, tangisang bayawak, hanopol, bignay, cycads, pandans, diliman ferns and moss.

It’s all over my head, and I realize the paucity of my vocabulary when it comes to recognizing the names of plants—a yawning gap in my cultural education that needs to be remedied ASAP.

“We’re developing the aesthetics of ecology, when something is beautiful not just visually, but because it fits into place,” he says.

Achacoso confesses that tending to this earthly paradise, he often loses track of time and has neglected his painting and other art practice. It’s hard to compete with nature’s own canvas.

“We have a psychological need for plants,” says Cuanang. “To keep our sanity, we need to nurture something.”

Through the Arboretum, they hope, the plantito/plantita fad can evolve into a deeper ecological consciousness.

The Pinto Arboretum of Philippine Plants will be opened to a limited number of visitors beginning Feb. 13. For appointments, email [email protected], or call tel. no. (0927) 764-6270. The management enjoins visiting plantitos and plantitas to resist the urge to take cuttings from the plants.